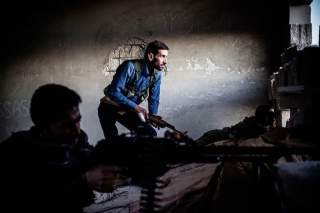 Few observers would disagree that the ongoing civil war in Syria is the greatest humanitarian catastrophe of this century: over 450,000 have perished, and over 4.8 million have been displaced. Outside of a negotiated settlement and an enduring ceasefire, which seem unlikely, the most favorable resolution may well be one in which the various parties to the conflict simply exhaust themselves—a hypothetical that suggests how bleak the Syrian landscape has become.

It is not just the mounting scale of the tragedy there that is imposing greater pressure on the international community—the United States, in particular—to stem the carnage. A series of images has compounded the sense of urgency: in particular, that of Aylan Kurdi, the three-year-old Kurdish child who washed ashore on a Turkish beach this past September, fully clothed and almost appearing to be sleeping; and that of Omran Daqneesh, the five-year-old Syrian child who was photographed at the back of an ambulance after having been injured in an airstrike, wearing a blank expression that belied the horrors from which he had just been extricated. There have also been wrenching clips, including that of the two brothers who embraced one another and sobbed uncontrollably upon learning that their other brother had been killed in in airstrike.

Like countless others, I shared the images of Aylan and Omran, as well as the clip of the two brothers. Increasingly, though, I question the usefulness of such dissemination. While these visuals scar our conscience and summon our outrage, after all, they do not offer prescriptive guidance; instead, their principal effect is to increase the gap between awareness and reflection. Were that collective indignation could yield prudent policy.

Given the gravity of the situation in Syria, it is not surprising that many observers have lambasted the Obama administration’s policies and suggested that it should have implemented the alternative courses of action they had proposed. As with much other criticism of alleged U.S. “dithering” and “fecklessness,” this proposition reveals an exaggerated belief in the capacity of U.S. power, especially military, to effect political outcomes. It also betrays a reductionist—borderline monocausal—view of the world, whereby any challenge to or erosion of world order is caused by U.S. weakness, and can accordingly be remedied by a more vigorous application of its power. Most problematically, this judgment invokes counterfactual reasoning. The hypothetical is analytically weak because it cannot be tested and, accordingly, it cannot be refuted. It is rhetorically powerful, however, because it exploits our intuition: the graver a given outcome is, the more likely one is to believe that an alternative policy would have resulted in a better one.

Paul Pillar observes that when “alternatives get assessed at all, a major asymmetry usually makes those assessments faulty. The real policy, warts and all, is put up against reality, with all of the policy’s limitations exposed for us to see. But the hypothetical alternatives are not similarly exposed; whoever suggests an alternative can just assume that the alternative would have worked the way it was intended to work.”

Those who posit counterfactuals can gloss over all manner of unforeseen contingencies; policymakers, however, must grapple with them constantly. Just as one should not advise a surgeon to operate while blindfolded, one should not exhort the United States to act in Syria when it possesses so little understanding of the dynamics therein. The rejoinder to this argument is immediate and forceful: conjecture is an inescapable element of policymaking. Former secretary of defense Donald Rumsfeld made the point memorably when he spoke of a continuum running from “known knowns” to “unknown unknowns.” The United States would be incapable of conducting a foreign policy if it conditioned every action on the possession of complete knowledge. Restraint, moreover, is not intrinsically virtuous; it can masquerade as prudence while actually serving to excuse indecision. But given the dubious outcomes of America’s interventions in Afghanistan and Iraq, whose respective constellations of actors are far less complicated than the one in Syria, it is unclear why observers would be more confident in the outcome of greater U.S. involvement there.

Earlier this year, former Defense Secretary Robert Gates lamented how little the United States understood about the contours of the emerging Middle East: “Are there fires we should just let burn out? Who are our friends? Who should we support?” Nowhere in the region are those questions more daunting than in Syria. In late 2013, the BBC reported that there were “believed to be as many as 1,000 armed opposition groups in Syria, commanding an estimated 100,000 fighters.” In her review of Charles Lister’s new book The Syrian Jihad, Emma Sky cites his estimates that there are now “at least 150,000 insurgents spread across 1,500 groups. And over the course of the civil war . . . at least 30,000 foreign fighters from over 100 countries have come to Syria to fight.” Even those numbers, however, offer only a small glimpse into the relevant set of actors. In a recent analysis of the conflict’s intractability, Max Fisher observes that both sides—Bashar al-Assad’s forces and the assorted outfits that seek his ouster—are “backed by foreign powers—including the United States, Russia, Iran, Saudi Arabia and now Turkey.”

“Whenever one side loses ground,” he explains, “its foreign backers increase their involvement, sending supplies or air support to prevent their favored player’s defeat. Then that side begins winning, which tends to prompt the other’s foreign backers to up their ante as well.” The result is an indefinite war of attrition that produces ever-greater suffering.

America’s recent interventions in Syria do not inspire great confidence. This past October, the Department of Defense scuttled a $500 million plan to train thousands of anti-ISIL fighters. Lister notes that in northern Aleppo, Free Syrian Army opposition factions supported by the CIA, the DOD and Turkey are now clashing with Syrian Democratic Forces, anti-ISIL factions supported by the DOD. In short, U.S.-supported forces are clashing with one another.

The United States should accept far more Syrian refugees, and it should substantially increase support for the humanitarian organizations that are operating in the country. It must concede, contrary to the can-do ethos that figures so prominently in its psyche, that efforts to change the grinding stalemate in Syria are likely to have little impact, and may well backfire.