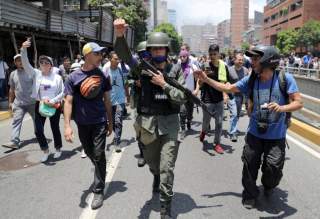 Street violence is occurring in Venezuela as part of the ongoing presidential crisis which started early this year. Supporters claim the kinetic action is a result of an organic, bottom-up revolution against a corrupt socialist government, while others claim it is a violent coup d'état orchestrated by foreign powers and not representative of the Venezuelan people.

The violence began after opposition leader Juan Guaidó, in a video message showing him flanked by soldiers, called for a general uprising and for the military to support his claim to the presidency. A graduate of George Washington University in Washington D.C., Guaidó was recently a backbencher in the National Assembly until being chosen as the body’s president, an office shared on a rotating basis, in December. Guaidó claims that the opposition-boycotted-presidential-election last year which reelected Chavista heir Nicholas Maduro was illegitimate and that as the current leader of the National Assembly he should assume the presidency himself. While his claim was recognized by numerous overseas governments in a dramatic public relations campaign led by the United States, the Venezuelan military did not move to support him.

Alongside the soldiers, next to Guaidó, was Leopoldo López, an opposition leader on house arrest since 2014 when protests lead to several deaths. López, the founder of Guaidó’s political party “Popular Will,” claimed he had been freed by the presidential claimant’s soldiers. At this time, it’s unknown how much of the Venezuelan military supports Guaidó, but no major officer has publicly backed him. Protests appear to be limited to Caracas, where López is the former mayor.

Since the beginning of the presidential crisis, the United States government has given overt support to the opposition. Juan Guaidó proclaimed himself president on January 10 following a phone call with Vice President Mike Pence. The same day, he met with Secretary of State Mike Pompeo. Elliott Abrams, the Reagan administration’s Assistant Secretary of State who oversaw U.S. material support for Central American death squads, was appointed Special Representative for Venezuela the same month. Along with the United States, Guaidó has been recognized by Canada, France, and a majority of North American and European governments, while Russia, China, and a majority of Asian and African governments continue to recognize Nicholas Maduro.

"The problems in Venezuela represent a major humanitarian crisis but not a direct security threat to the United States, therefore use of military force should be off the table,” said Lieutenant Colonel Daniel L. Davis, a Senior Fellow at Defense Priorities. “However hard it is for us to endure the scenes coming out of Venezuela, U.S. military action would almost certainly worsen the situation for the Venezuelan people. If the Trump administration uses military action to try and force regime change, the odds are high that we would end up supporting one side of a civil war, likely getting sucked into fighting a losing and bloody insurgent war for years to come. This is not in America's interest."

Contrary to Davis’ view of the U.S. national interest, the Trump administration has made it clear that it supports regime change in Venezuela. “I am monitoring the situation in Venezuela very closely,” tweeted the President this afternoon. “The United States stands with the People of Venezuela and their Freedom!”

“@vladimirpadrino: The FANB [Strategic Command Operations of Venezuela] must protect the Constitution and the Venezuelan people. It should stand by the National Assembly and the legitimate institutions against the usurpation of democracy. The United States stands with the people of Venezuela,” tweeted National Security Advisor John Bolton this morning. Hours later, when it appeared there was no mass flip of soldier’s loyalties, Bolton doubled down with an ultimatum. “Venezuelans have made clear that the current path toward democracy is irreversible. Venezuela’s military has a choice: embrace democracy, protect civilians and members of the democratically-elected National Assembly, or face more man-made suffering and isolation.” The isolation refers to the numerous U.S. sanctions placed on the Venezuelan economy, restricting it from international trade and banking services.

Senator Marco Rubio (R-FL), the congressional point-man on U.S. efforts in Venezuela, criticized American media outlets for calling Juan Guaidó’s demand for a military overthrow of Maduro a “coup attempt.” The senator tweeted, “Just saw @CNN shamefully call what is happening today in #Venezuela a ‘coup attempt’ @jguaido is recognized as legitimate interim President of #Venezuela by constitution, over 50 countries & OAS [Organization of American States]. The only coup is the one carried out by #Cuba in support of dictator #Maduro.” Rubio followed-up with, “Some of the most shameful reporting ever by @CNN right now. Calling what is happening in #Venezuela an ‘armed coup.’ @jguaido efforts are supported by virtually every nation in the region. Grotesque.”

Marco Rubio’s categorical denial of a coup attempt, and his determination to narrate events happening in Venezuela as a popular revolution, is reminiscent of a mindset elucidated during the early days of the George W. Bush administration. While the facts on the ground (“discernable reality”) are playing out in one direction, American policymakers do not have to respond to what may or may not be true. “That's not the way the world really works anymore,” an anonymous aide (later identified as Karl Rove) told journalist Ron Suskind. “We're an empire now, and when we act, we create our own reality. And while you're studying that reality—judiciously, as you will—we'll act again, creating other new realities, which you can study too, and that's how things will sort out. We're history's actors...and you, all of you, will be left to just study what we do.”