Cruel Britannia: The Row Between Trump and the Ambassador 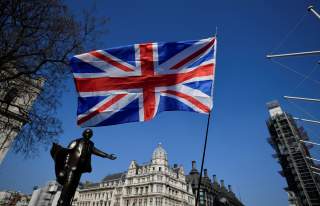 Update: The resignation of Ambassador Kim Darroch should not come as a surprise. It quickly became clear that his position in Washington had become untenable after his memos slamming President Donald Trump became public. Boris Johnson, the leading candidate to become prime minister of the United Kingdom, repeatedly refused to offer any support for Darroch last night. In his resignation letter, Darroch explained, “the current situation is making it impossible for me to carry out my role as I would like.” He added, “Although my posting is not due to end until the end of this year, I believe in the current circumstances the responsible course is to allow the appointment of a new ambassador,” he wrote, noting the situation “has brought home to me the depth of friendship and close ties between our two countries.”

President Donald Trump announced in a Monday afternoon Twitter salvo on that he would “no longer deal with” British ambassador Kim Darroch, who had criticized the president as “uniquely dysfunctional” in recently leaked comments from 2017. British Foreign Secretary Jeremy Hunt responded that Trump’s comments were “disrespectful and wrong.” He added that if he becomes prime minister, then “our ambassador stays.” With his comments, Hunt waded into the mounting controversy over Darroch's remarks. But at a moment when Britain is flailing in its attempt to reach a sucesssful Brexit, the pound continues to sink, and a leadership crisis has engulfed the Tory party, the dispute with Trump comes at a particularly awkward moment for the United Kingdom. It would appear to confirm rather than ease apprehensions about Whitehall's ability to conduct diplomacy successfully. Perhaps Boris Johnson, who is the leading candidate to become prime minister, can restore the special relationship and strike a trade deal with Trump. But for now, relations look like they will be rockier than ever.

Darroch had questioned the U.S. president’s mental capabilities in a secret June 2017 cable to British national security advisor Mark Sedwill, calling Trump “clumsy and inept” and warning that the Trump administration could “end in disgrace.” Likening the president to Arnold Schwarzenegger’s character in The Terminator, the ambassador claimed that Trump could “emerge from the flames, battered but intact,” but also warned that the United States may “do some profoundly damaging things to the world trade system” or engage in an ill-advised military intervention.

The messages had been intended for the eyes of a few British officials only, but were publicized as part of a trove of diplomatic communications leaked by The Daily Mail on July 6. British diplomats’ private correspondence is “not necessarily the views of ministers or indeed the government. But we pay them to be candid,” the British Foreign Office said in a statement. “Our team in Washington have strong relations with the White House and no doubt these will withstand such mischievous behavior.” But why confirm that Darroch's communications were disparaging of Trump? The Foreign Office might simply have responded that it could neither confirm nor deny the reports, and that any ambassador would send a variety of messages back to his or her home country. Instead, the British opened up a battle with Trump.

Some have speculated that the leaks were orchestrated by a pro-Brexit faction looking to unseat Darroch, whom The Daily Mail called a “europhile” in its report. “[T]he real story here is the story of the leak. Everybody could probably have guessed that Sir Kim reported back about Trump as if he were the average CNN pundit,” says Freddy Gray, deputy editor of The Spectator. “The leak must have sprung because we are about to have a new prime minister, and that will almost certainly be Boris Johnson. In that sense it feels like a Brexiteer coup in Washington.”

“I think both Trump and Boris see an opportunity to establish great post-Brexit ties, and they both see the upside in this diplomatic kerfuffle,” Gray told the National Interest.

President Trump first struck back on Sunday, telling reporters that Ambassador Darroch “has not served the U.K. well.” The next day, he published a string of tweets eviscerating both the ambassador as well as the government of Prime Minister Theresa May.

“I have been very critical about the way the U.K. and Prime Minister Theresa May handled Brexit. What a mess she and her representatives have created. I told her how it should be done, but she decided to go another way,” he wrote. “I do not know the Ambassador, but he is not liked or well thought of within the U.S. We will no longer deal with him. The good news for the wonderful United Kingdom is that they will soon have a new Prime Minister. While I thoroughly enjoyed the magnificent State Visit last month, it was the Queen who I was most impressed with!”

The president continued Tuesday morning with another extended Twitter thread. “The wacky Ambassador that the U.K. foisted upon the United States is not someone we are thrilled with, a very stupid guy. He should speak to his country, and Prime Minister May, about their failed Brexit negotiation, and not be upset with my criticism of how badly it was . . . handled. I told @theresa_may how to do that deal, but she went her own foolish way-was unable to get it done. A disaster! I don’t know the Ambassador but have been told he is a pompous fool,” tweeted the president, before concluding by thanking himself for the current state of the American economy and military.

“The starting point is that it has always been the role of a British ambassador (I’m sure any ambassador) to give frank advice and opinions about what’s going on in the country, including the leadership of the country where they are posted,” says Andrew Stuttaford, contributing editor of National Review. “You can agree or disagree with Kim Darroch’s opinion about the administration, but he is by no means out of line in making it. What is out of line is leaking it; the essence of ambassadorial advice is that it should be confidential, so . . . whoever it was who did leak it has not helped the UK.”

“There should not have been a leak, and that is completely wrong. It undermines the ability of an ambassador to be able to speak frankly to his government and give advice that he thinks is right. So that is, without doubt, to be condemned and the hammer should come down if they find out who the leaker was,” emphasizes Stuttaford.

While a “more normal president, if there is such a thing” would have laughed this off, Stuttaford thinks President Trump overreacted. His tweets have now put the British government in a precarious position. “On the one side, you need an ambassador who can work with the U.S. And on the other, you cannot be seen as being pushed around, especially when that ambassador has done nothing wrong,” Stuttaford avers. “So basically, what I think the British government has to do is keep him in place.

In a statement provided to the National Interest, the British Embassy in Washington reiterated that the exchange should not affect the historic “special relationship” between the United Kingdom and the United States. “We have made clear to the U.S. how unfortunate this leak is. The selective extracts leaked do not reflect the closeness of, and the esteem in which we hold, the relationship . . . The U.K. has a special and enduring relationship with the U.S. based on our long history and commitment to shared values and that will continue to be the case.”

“At the same time we have also underlined the importance of Ambassadors being able to provide honest, unvarnished assessments of the politics of their country,” continued the statement, making it clear that the ambassador’s current position is not threatened. “Sir Kim Darroch continues to have the Prime Minister’s full support.”

“I’m sure he’s not going to be invited to many dinners at the White House anytime soon, but if the ‘special relationship’ is sufficiently special, there are endless channels of communication and in an unusual world things can carry on more or less as usual,” says Stuttaford.

When asked for clarification if the administration would continue to work with Darroch, the State Department referred to the White House for comment. As of press time, the White House has not responded.