The Cruel Truth about Population Control 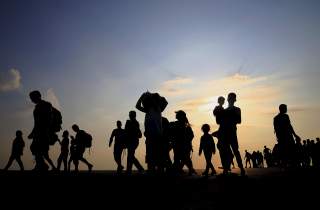 Canada’s government has issued a report concluding that the country’s mistreatment of indigenous women amounts to genocide, citing, among other travesties, nonconsensual sterilizations. In North America, various prejudices motivate coercive population control policies; in Asia, where most forced sterilizations take place today, unfounded overpopulation alarmism acts as the primary motivation. However it may be rationalized, there is never any moral or practical justification for coerced sterilization.

In late 2018, sixty indigenous Canadian women alleged that they had suffered forced sterilizations and filed a class-action lawsuit against the Saskatchewan province health system. New allegations have continued to come forth in 2019, and one recent account claims an involuntary sterilization took place as recently as last December.

The United States has its own sinister history of forced sterilizations. Roughly seventy thousand individuals were forcibly sterilized in the twentieth century under “eugenic” legislation in the United States. Eugenics was the pseudoscience of trying to improve the population by preventing people thought to have inferior genes from having children. Marginalized groups such as Native Americans were particularly vulnerable. In the 1960s and 1970s, one out of four U.S. Native American women underwent sterilization, with that figure rising as high as 50 percent between 1970 and 1976.

Recent cases of forced sterilization in the United States have targeted prisoners, echoing earlier eugenic policies intended to eliminate criminal behavior. Tennessee only banned the coercive sterilization of inmates last year. In 2014, California passed legislation to stop prisons from non-consensually sterilizing inmates. More than a quarter of tubal ligation sterilization surgeries in Californian prisons from 2004 to 2013 were carried out without the prisoner’s consent.

As disturbing as reports of coercive population control in the United States and Canada are, such abuses occur on a far larger scale today in India and China.

In 2016, the Supreme Court of India ruled that “informed consent is often not obtained from patients prior to conducting the procedures” in mass sterilization camps and directed the government to discontinue them. However, an investigation last year found that camps continue to thrive in the same way as prior to the 2016 ruling. And the U.S. State Department’s Country Reports on Human Rights Practices for 2018 found that “coerced abortions and sterilizations” continue to take place in China, which softened its “one-child policy,” restricting families to a single child, to a “two-child policy” beginning in 2016.

The primary motivator of coercive population control measures in China and India is different: concerns about so-called overpopulation. In the 1970s, alarmist writings such as the Club of Rome’s report The Limits to Growth and Stanford University biologist Paul Ehrlich’s book The Population Bomb helped spread fear that overpopulation would deplete resources and result in disastrous shortages. That fear funneled money towards population control. In the 1970s, encouraged by tens of millions of dollars loaned from the World Bank, the Swedish International Development Authority and the UN Population Fund, India began large-scale sterilization efforts. Those efforts peaked in 1975, when the prime minister suspended civil liberties in a national “emergency” and sterilized over six million people in a single year. In 1979, China instituted its infamous one-child policy, inspired by The Limits to Growth.

It should be noted that, in addition to overpopulation fears, there are also cases of prejudice against ethnic or religious minorities in China and India. Many victims of forced abortion under the two-child policy in China are minorities, such as ethnic Kazakhs and Uyghurs. Those groups practice Islam, a minority religion the government deems insufficiently Chinese. And in India last year, a union minister of one of India’s two major political parties opined that the government must formulate “a law regarding population control” to save India “from the growing” non-Hindu population. Still, many victims of coercive population control in both China and India do not belong to any minority group.

While the abuses alone are reason enough to oppose coercive policies, the premise that “overpopulation” is a problem at all is incorrect. It’s quite the opposite, in fact. New research shows that population growth goes hand-in-hand with more abundant resources.

Consider the amount of time it takes an average person to earn enough money to buy one unit in a basket of fifty basic commodities—the “time-price” of those items, so to speak. The Simon Abundance Index, coauthored with Marian Tupy, found that between 1980 and 2018, the time-price declined by nearly one percent for every one percent increase in population. In other words, every additional human being to be born seems to make resources proportionately more plentiful for the rest of us.

Moreover, economic development causes birth rates to fall without any need for draconian population control measures. It is now well-documented that as countries grow richer, and people escape poverty, they tend to opt for smaller families. That phenomenon is called the fertility transition.

In 1979, the year the one-child policy began, China’s birth rate was just under three children per woman. China’s economy has grown dramatically since it adopted policies of greater economic freedom in 1978, and as the country has grown richer, its fertility rate has fallen. The decline has been perfectly in line with trends in neighboring countries that have also seen rapid economic growth, and that do not coercively limit family sizes.

In India, where liberalizing economic reforms didn’t begin until 1992, much later than in China, the birth rate has also fallen, albeit less dramatically. This change has occurred as India has grown richer, though not as rich as China. As with China, the decline in India’s birth rate is in line with trends seen in neighboring countries, most of which have seen even steeper declines as their economies have grown. In fact, among India’s neighbors, only Pakistan and war-torn Afghanistan have higher birth rates, although their birth rates are declining as well.

Overpopulation hysteria is just as groundless a reason to forcibly limit reproduction as ethnic or religious bigotry and the pseudoscience of eugenics. Whether motivated by a desire to keep marginalized people from having children or to shrink the population, coercive population control remains abhorrent.

Chelsea Follett is a policy analyst at the Cato Institute’s Center for Global Liberty and Prosperity and managing editor of Human Progress.org.