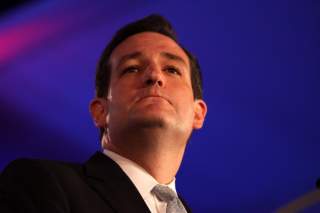 In instructing Republicans last night at the convention in Cleveland to “stand, and vote, and speak” their conscience in November, Ted Cruz was asking them to consult something that he has never displayed. There was talk of nothing less than Lucifer from Dr. Ben Carson at the convention. He meant Hillary Clinton. He had the wrong person in mind.

Senator Marco Rubio said, “After a long and spirited primary, the time for fighting each other is over.” Cruz wasn’t listening. From the outset, Cruz was intent on sabotage. He was firing on Fort Trumpter to try to launch a GOP civil war. In short, the lubricious Cruz was playing what New York Times columnist Frank Bruni correctly called a “mischievous, misanthropic game of subverted expectations” last night. The real subversion, however, was of whatever remains of his reputation, never very high to start with. The tawdriness and mendacity of Cruz was truly something to behold.

Yes, it was probably inevitable that Cruz was going to withhold his own endorsement of Donald Trump, both because of his assertion that Cruz père may have been involved in the assassination of John F. Kennedy, but above all because Cruz fils likely believed that he was promoting his own presidential prospects for the next go-around in 2020. When future generations of American children are instructed about demagogic politicians, Cruz’s performance should hold a prominent place in any chronicle. The only merit of Cruz’s antics is that they helped to overshadow the following, lackluster address by Indiana governor and Trump running mate Mike Pence, who introduced himself “to those of you who don't know me, which is most of you...”

But how much does any of this actually matter for Trump’s political fortunes? As the Washington Post’s Dan Balz notes, he could pull his chestnuts out of the fire with a strong speech tomorrow. The stage is set as Trump likes it—the spotlight is now on him. But it is also the case that Trump’s prospects may not rest on the convention. The real question is how pervasive the sentiments that Trump represents are across the country.

As the British journalist Geoffrey Wheatcroft wrote me in an email this morning, it’s a mistake to dismiss Trump’s prospects. According to Wheatcroft,

Donald Trump is still regarded, at any rate by the mainstream liberal media, as both sinister and absurd, and a man who can’t possibly win in November, but then they thought he couldn’t possibly win the nomination. They’ve failed to grasp that he’s tapped into both an ugly vein of nativism and also an authentic and justified resentment by people who have been left behind economically. Nor have they recognized that his opponent is undeserving and unconvincing, shifty and shallow, quite understandably thought dishonest by two of three Americans, and likely to prove a very weak and vulnerable candidate.

It is also the case that Trump is inherently a far more radical and thus interesting candidate than Hillary Clinton. Clinton will run as the safe and cautious choice in the hope that she can successfully define Trump as Barry Goldwater redivivus and watch him flame out. But this assumes that the voters are not looking for a change after eight years of the Obama administration—for a shift in the country’s direction, and a radical one at that.

Trump made it clear in an interview with the Times’ David Sanger and Maggie Haberman that he is intent upon a sweeping shift in both domestic and foreign policy. He sounded like the anti-Goldwater. Goldwater endorsed going on a crusade against Communism in 1964. Trump is saying goodbye to all that. Americans, he said, have to “fix our own mess” before trying to boss around other nations. He dispensed with conservative foreign-policy orthodoxies one after another, including the “right to lecture” others. He essentially wrote off the security guarantees to the Baltic States. This approach suggests that he would also take a hard look at American guarantees to Taiwan and other countries in Asia. Of course there are internal contradictions in Trump’s own program—how would he deliver on his promise to smash Islamic State if he follows this foreign-policy prescription?

But it would be foolish for Trump’s detractors to underestimate the potency of his candidacy. He clearly does have a strong, instinctual aversion to intervention abroad that he will clearly enunciate during his convention speech tonight. Trump may not believe in trying to reform nations abroad, but his very personal project to refashion the GOP in his own image may well take another step forward tonight.