Dachau in the First Days of the Holocaust 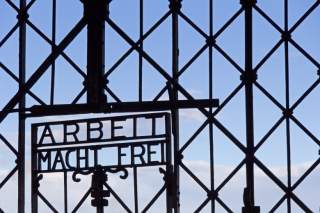 IN THE predawn hours of April 12, 1933, not three months into Adolf Hitler’s tenure as chancellor of Germany, a group of drunken SS officers barged into the “Jewish block” of the Dachau concentration camp, an abandoned munitions factory site located in a wooded area two miles from the Bavarian town of that name, and awakened the prisoners by firing pistols into the air. The SS officers had restlessly anticipated the event, with one of them, Robert Erspenmüller, the camp’s deputy commander, having earlier boasted to a policeman he knew that “in the next [few] days he would kill some Jews” as a “trial of strength.”

Later that morning, at roll call, four prisoners were called by name to step forward for special work duty. Rudolf Benario and Ernst Goldmann were prominent young Communists in their native Furth. Arthur Kahn held no Communist affiliation, but had been swept up in the recent wave of Nazi arrests grouped under the misleading label “protective custody.” The fourth, a Communist named Wilhelm Gesell, joined the other three in repeatedly loading debris onto a wheelbarrow and pushing it to the camp’s gravel pit. SS guards, who had assumed control of the camp from the Bavarian State Police the day before, beat the men as they worked.

At noon, the men’s ordeal ended—or so they thought. Within a few hours, Gesell was replaced in the “punitive labor” detail by Erwin Kahn, a Jewish businessman who had no Communist or labor-movement affiliation (and no relation to Arthur). Unlike the other three men, who had all arrived on site the day before, he had spent three weeks interned at Dachau, writing to his wife that his treatment under the custody of the Bavarian State Police had given him “nothing to complain about.” He looked forward to sorting out the reason for his detention, which had not been provided when a Nazi storm trooper arrested him on the streets of Munich in mid-March.

Finally, when the prisoners had been assembled for the purpose of receiving their mail—an amenity still observed at that early stage of things—an SS officer named Hans Steinbrenner, known for his brutality, interrupted the proceedings to demand that Benario, Goldmann, and Arthur and Erwin Kahn report for more work in the gravel pit. A contingent of SS men marched the four outside the camp’s walls, to the woods nearby, and shot them. All died instantly, except for Erwin Kahn, who was taken to a nearby hospital and died from his injuries four days later. Though postwar investigation of the incident was compromised by incomplete evidence and self-serving testimony, it was established that Erspenmüller and two other SS guards, Hans Burner and Max Schmidt, committed the murders. The next morning, Dachau’s remaining prisoners, alarmed by the sound of the shots and fearful of what they portended, were informed that the four had been killed while trying to escape.

AS HISTORIAN Kim Wünschmann notes in Before Auschwitz: Jewish Prisoners in the Prewar Concentration Camps, an event like this must be considered in the context of its own time and not in light of subsequent events. “We must not forget,” she says, “that what might seem ‘normal’ or ‘common sense’ at later stages of camp history evolved out of deeply unsettling and ‘abnormal’ first-time situations—origins and precedents whose consequences and impacts were entirely unclear.” She writes:

In the early concentration camps, the first killing of prisoners was an event of enormous significance. It constituted a radical break in the camp experiences of both inmates and guards, a point of no return after which nothing was as it had been before. . . . To the prisoners, the first murder signaled that, inside the camp, they bore the real risk of losing their lives. From this point on, they knew that the guards would not stop their abuses at the ultimate border of death. The SS and SA men, on the other hand, for the first time tasted the overwhelming and unbound “power to kill.” More than before, the camp personnel were now held together by a shared criminality . . . a camaraderie of crime structured by its very own codes of honor and morality.

The circumstances surrounding these murders—the unprecedented appearance of the SS guards in the prisoners’ barracks before dawn, the singling out of the eventual victims for punitive work and their removal from the grounds immediately prior to their deaths, all in the wake of Erspenmüller’s dark vow of impending murder—strongly suggest that the killings were premeditated. Thus did Dachau become, in the words of German historian Jürgen Matthäus, “the first institution in which the Nazi slogan ‘Jews, perish!’ was officially put into action.”

Matthäus’s work may mitigate against Wünschmann’s claim that the lives of Jewish prisoners in places like Dachau prior to the outbreak of World War II is “an under-researched topic.” She asserts that in the vast literature about the Final Solution, “Historians have rarely given Jews’ imprisonment in the [prewar] concentration camps more than a passing glance.” The corpus of writings cited in the author’s footnotes, including several hundred titles in German and English, suggests otherwise. And there is something a bit strained about the terms Wünschmann sets forth to stake her claim to scholarly uniqueness; until now, we are told:

No all-encompassing monograph has brought together the wealth of empirical information unearthed by numerous local studies of individual camp sites and an analytical approach that not only illuminates the bigger picture of Jewish camp imprisonment, but also embeds it in the broader context of anti-Jewish persecution before the war [emphasis added].

There is also, in the book’s title, a violation of the very principle the author aptly insists we observe, as students of history, about considering events in their own temporal context. Wünschmann skillfully brings to life an entire universe of people, events and dynamics—a feat she manages through precise attention to detail and her maintenance of humanistic sensitivity for the feelings, motivations and perceptions of all relevant actors, the killers included. These elements deserve to be understood and framed in terms that do not render them mere antecedents to more monstrous atrocities. This the author accomplishes at all points—except on the cover and title page.

By and large, though, students of this dark chapter in twentieth-century history should regard Before Auschwitz as an important and finely written contribution to the literature on Nazi Germany and the Holocaust. While repeatedly taking pains to note the fragmentary nature of the evidentiary record, Wünschmann synthesizes from an enormous array of available sources: camp administration files, SS records, newspaper reports, prisoners’ mail and memoirs, contemporaneous and postwar judicial proceedings, survivor testimony and, as mentioned above, a large body of previous historical investigation.

IN HER effort to “reconstruct the reality of the imprisonment of Jewish inmates,” Wünschmann is also mindful that some of the most extensive and seemingly reliable sources, such as survivor testimonies and memoirs, are freighted toward “unusual occurrences such as extreme manifestations of violence.” She cites the writings of Paul Martin Neurath, a Jewish sociologist who was imprisoned at Dachau and Buchenwald, and who warned that a relentless focus on beatings and killings provides a “distorted” picture of the prisoner’s life, which was instead dominated, he said, by “the 120 loads of gravel and the roll call and the construction of the bed and other routine jobs.”

More than just an aggregation of violent anecdotes, Before Auschwitz uses statistical modeling and other tools of political science to establish, as best as can be accomplished in these murky circumstances, such basic data as fluctuating camp populations, average inmate ages, geographic concentrations of inmate and guard origins, and so on. This kind of research enables Wünschmann to tell us that Jewish prisoners of the prewar camps “were mostly of a mature age—in their thirties or older—when they arrived. . . . Almost one-third of them were over the age of forty.” By contrast, she cites the work of historian Christopher Dillon in establishing that the average age of the Dachau SS guards declined, between 1933 and 1939, from twenty-five to twenty. “This means,” she writes, “that Jewish prisoners, on average, were ten to fifteen years older than the young men who guarded and abused them—a fact not unimportant to bear in mind when analyzing their conflicting relations.”

Wünschmann also describes how some camps, by virtue of their rural location—Osthofen, for example—were more likely to see guards and prisoners originating from the same towns, with the predictable consequence that lingering disputes about land, cattle prices or the affections of a local girl sometimes played out, under dramatically altered terms and often with violent endings, in the confines of the camp. For the last page—indeed, her last sentence— Wünschmann saves her most arresting statistical insight of all, which is the fact that “most of the Jewish prisoners of the prewar period stayed alive and were able to escape Nazi persecution.”