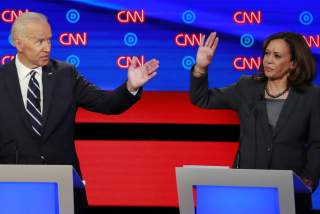 “Why should the U.S. tie its own hands with that policy?” CNN correspondent Jake Tapper asked Sen. Elizabeth Warren (D-MA).

This leading question during last week’s Democratic debate immediately opened up a longtime policy fissure over U.S. nuclear strategy. The policy in question is the venerable “no first use” pledge, in which the United States would forswear being the first nation to deploy nuclear weapons during a military conflict. Under the pledge the United States would still reserve the right to massive retaliation.

While President Barack Obama privately mulled over the pledge, he decided against officially endorsing it. The United States has always retained a “first use” option that preserves Washington’s ability to launch nuclear weapons at any time, even unprovoked.

“I think there are two fundamental problems with the ‘first use’ option,” says Lawrence Wittner, Professor of History emeritus at SUNY Albany. “One is that among nonnuclear nations, it provides an incentive to produce nuclear weapons. Since the United States is not deterred from striking them first . . . then the best deterrent would seem to be to develop nuclear weapons of their own.”

“The second problem is it encourages such nuclear nations to move first. So, in a crisis situation, in a confrontation, [they’d be] fearful of losing their nuclear assets . . . it gives them an incentive to strike first, and in that sense both countries might slip into a nuclear war that they didn’t want or plan on,” Wittner told the National Interest.

William Perry served as secretary of defense under President Bill Clinton from 1994 to 1997. He believes that current nuclear policy is an inutile holdover from the cold war. “Back in the early days of the Cold War when we were faced with the prospect of an invasion by the Red Army in Europe and did not have the conventional forces to stop them . . . we had a plan to use our nuclear weapons first in the case of that conventional attack because we did not believe our NATO conventional forces were sufficient to stop the Red Army,” Perry told the National Interest. “Since then that problem has gone away, but we still maintain the policy and I don’t think people have rethought it carefully that we don’t have the need for that today.”

Conn Hallinan, a columnist for Foreign Policy in Focus, agrees that the primary motivation against adopting “no first use” is deference to traditional thinking. “I think there is a certain section of the defense establishment (not everybody), that sees nuclear weapons as just part of the standard American military arsenal . . . They’ve always basically argued that the United States needs the right to be able to use nuclear weapons, and anything else ties the president’s hands.”

Wittner adds that personal reasons might also weigh against the change in policy. While some might genuinely disagree with the strategy change, “others might be holding on to their jobs with powerful institutions or [don’t want] to get out in front of what they assume public opinion is, or [are] wary of challenging the Pentagon.”

According to all three experts, a “no first use” pledge would be more than a token gesture and would be interpreted by other countries as a sincere start of nonproliferation. “I think if we made a “no first use” statement in the United States, we would be serious about that. It would not be symbolic. And then, if we did that, we would back it up with changes in our force posture and changes in our policies.” Those structural changes “would be the clear indications to our own people and to other countries that they were not symbolic to us, that we were serious about it,” said Perry.

It is the change in nuclear posture that makes the pledge effective. “I mean nuclear war doesn’t just happen. When someone shoots a missile at you, you’re going to be able to detect (hopefully), a lot of other activity that’s going on,” said Hallinan, explaining that such detection is what will build trust in the pledge.

Soviet General Secretary Leonid Brezhnev embraced a “no first use” pledge in 1982, but the Soviet Union’s nonexistent policy changes rendered his promise a mere propaganda ploy. “I don’t believe they were serious, and people did not believe them, and people didn’t trust them . . . [T]hey were postured in such a way that there was no reason to believe their ‘no first use,’” Perry said.

There are currently nine countries that possess nuclear weapons. Only two, China and India, have endorsed a “no first use” pledge, although India has started to back away from it under the Modi government.

While Perry doesn’t think the pledge will receive much spotlight during the early primaries, he does believe it will receive serious discussion during the general election. “The Democratic candidate, whoever it is, will make a significant point of it and make it clear that if he or she is elected president it will be an important part of their program.” This should help distinguish them from Trump.

This week marks the seventy-fourth anniversary of the atomic bombings of Hiroshima and Nagasaki. The U.S. strikes against Japan, the only time nuclear weapons have been used in warfare, killed hundreds of thousands of civilians. “And the bomb they dropped on Hiroshima was basically a hand grenade with a bad attitude compared to what they have today,” added Hallinan.

“I think there are as many people say, two existential threats to the survival of humanity. One is climate change, and the other is nuclear war. And certainly, the sword of Damocles that has been held over the heads of human beings ever since 1945 continues to be there,” concluded Wittner.

All three experts told the National Interest that the threat of a nuclear war is not to be underestimated.

“I believe that the danger of a nuclear catastrophe today (this year, next year), is greater than it was during the darkest years of the Cold War,” said Perry.