The Danger of a Second Trump-Kim Summit 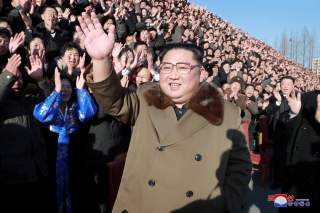 On 27 February, we will again take our seats as spectators to a second Trump-Kim summit, held in Southeast Asia again—this time in Hanoi, Vietnam. There has been an eight-month lapse between the first U.S.-North Korea summit which produced an eggshell-thin four-point “agreement” between the two countries. That agreement glossed over the phrase “denuclearization of the Korean Peninsula.” The expectation would have, under normal circumstances, been to secure an agreement toward the dismantlement and complete denuclearization of the Kim regime’s nuclear weapons program. But as Special Representative Stephen Biegun pointed out, “normal has rarely been the norm” with North Korea.

And so, if atmospherics and reporting on the recent U.S.-North Korea working-level talks are a bellwether, and with one week remaining until Trump-Kim 2.0, banking on a clean-cut, definitive agreement to resolve the nuclear dilemma is but an elusive hope.

Of course, much remains speculative still. That the two sides held “constructive talks” and outlined twelve topics, however, should give an indication that the U.S.-North Korea rift on the nuclear issue is unlikely to be mended in one fell swoop of a summit. Negotiations will continue beyond Vietnam.

Washington appears to be open to trading an end of war declaration—a slick to the path toward a peace agreement—for the dismantlement of Pyongyang’s Yongbyon nuclear research facility, which is another symbolic measure. Recall that the two Koreas agreed at the April 2018 Panmunjom summit to declare an end to the Korean war (by the end of 2018). Also remember that last September, South Korea’s president Moon Jae-in told the press that Kim promised to shut down this very complex if Washington took “corresponding steps.” Kim later alluded to these corresponding steps again in his New Year’s speech as a condition for the wonderfully fast-paced development of bilateral relations awaiting America and North Korea.

The only fast-paced development, however, appears to be more on Washington’s front than Pyongyang, as the administration has served Kim a menu of concessions as enticing rewards to persuade the North to commit to destroying Yongbyon.

Additional U.S. concessions under consideration include a reduction of U.S. troop presence in South Korea, halting joint U.S.-ROK military exercises, removing U.S. strategic assets in the region, setting up Washington-Pyongyang liaison offices, and perhaps even slowly relaxing sanctions to resume operations of the Kaesong Industrial Complex and Mt. Kumgang tours. All Kim has to do for his part is agree to dismantle his country’s key missile facilities—those capable of reaching the continental U.S.—and perhaps allow inspectors on site to verify the dismantlement.

Kim has long sized up Trump and the extent to which he is willing to go to paint this second encounter as a success. That Washington appears open to shifting its position on Kim’s nuclear program, as evidenced by the list of possible U.S. concessions ahead of any North Korean steps beyond the mere chipping away at its nuclear weapons program. This has exposed to North Korea a manifold of cards that the United States should have kept closer to its chest.

For the United States, whether the Vietnam summit ends with a Trump largesse in an end of war declaration, a drawdown of the U.S. troops, or a soft promise to convene again to hash out detailed steps and definitions, the meeting yields a tradeoff between a short-term packaged “deal” to hail as a success in (temporarily) reducing the North Korean nuclear threat. However, this also comes with long-term haunting consequences to Washington’s strategic interests at home and in the Northeast Asia region. In the name of achieving “peace” on the Korean Peninsula, Washington sets itself on the path toward decoupling from an alliance key to sustaining its interests and becomes a complicit hand in feeding the creature it has long sought to tame—an emboldened, nuclear-armed Kim.

For South Korea, the not-so-invisible hand in these negotiations, a U.S. concession to North Korea may foster an environment ostensibly conducive to inter-Korean relationship building. In light of Seoul’s current political climate, however—including its economic woes, ongoing military and diplomatic spat with Tokyo, as well as corruption allegations against Moon and his affiliates—efforts to build a lasting peace on the Peninsula rests on gossamer-thin foundations. By extension, Seoul’s ability to weather and manage the unfolding political, societal, and economic consequences of a “peace” framework, particularly under a potential shift in its alliance with Washington, will naturally yield a reassessment of regional dynamics and the costs and benefits of longstanding alliances.

Biegun in his Stanford speech alluded to the North Korea problem being “much larger” than the nuclear standoff, and that “when you can’t solve the problem,” the trick in Washington is to “enlarge the problem.” Wittingly or otherwise, the Vietnam summit could turn into the embodiment of this very observation.

Soo Kim is a former CIA North Korea analyst. She was a 2015 National Security Fellow at the Foundation for Defense of Democracies, where she authored a monograph on the implications of the Iran Nuclear Deal on the South Korean nuclear program. You can follow her on Twitter at @mllesookim.