Dangerous Escalation: US Backs Putin Into a Corner 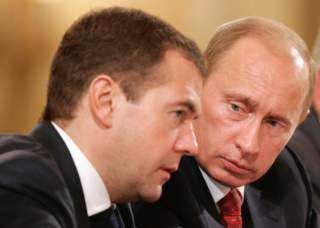 Last week, the Russian Central Bank (RCB) raised its benchmark interest rate from 10.5 to 17 percent in the wake of the Russian ruble’s (RUB) worst one day slide since the 1998 currency crisis, falling at one point by as much as 20 percent on December 16. The RUB has lost more than 45 percent of its value over the course of 2014. The signal gleaned by the markets from the RCB’s rate increase is likely the correct one--resorting to a massive interest rate hike means that the Russian government will not deploy more of its vast currency reserves in the service of protecting the RUB even though, as foreign exchange analyst Neil Bouhan told me, “while some media outlets have raised questions of liquidity in Russia’s reserves… $46 billion of those holdings (~$416 billion) are held in gold, which should be readily available and liquid enough to deploy.”

While the RCB has spent somewhere between $80-87 billion of its FX reserves on propping up the RUB so far this year, the reason it did not deploy the reserves to stanch last week’s bloodletting is straightforward: one of Russia’s principal claims to great power status resides in its vast currency reserves and Putin has chosen the path of economic hardship over forfeiting that claim. In other words, he is gambling that his government will survive the economic dislocations that may unfold because of higher rates, submarket oil prices and an undervalued currency. Some analysts believe the introduction of capital controls is likely to be the next step.

If last week is anything to go by, Russia may be in for some rough sledding indeed. The price of oil, which needs to be around $105/per barrel in order for Russia to balance its books, hovers around $60 and could drop even further. Questions abound as to the root cause of the stagnating price of oil. One possibility that cannot be ruled out is that the OPEC cartel, made up of some of the globe’s most noxious anti-American regimes, is intentionally holding down the price of oil in order to punish Russia for remaining steadfast in its support for the Syrian regime?  Once again, it seems, the U.S. is allying with the Saudis and other like-minded fanatics to no good end. Plus ca change…

In any event, several European companies have, in the wake of the RUB collapse, suspended or significantly curtailed operations in Russia, including BMW and Jaguar Land Rover. Meanwhile, according to Bloomberg News, the German retailer Metro AG has suspended its plans for an initial public offering of its Russian unit while businesses as diverse as Renault SA and McDonalds have been forced to raise prices.

Given Russia’s rapidly deteriorating economic situation, it would not be too much of an exaggeration to say that the confrontation between Russia and the West could be entering a dangerous escalatory spiral. This is worrisome because we actually know little about the dynamics of escalation and what we do know is rather alarming. One hundred years on historians are still puzzling over how and why exactly the First World War went from a diplomatic crisis to a full-scale shooting war. Perhaps even more relevant is the case of U.S.-Japanese relations in the run up to Pearl Harbor. The U.S., having unilaterally imposed an oil embargo on Japan (at that time 70% of Japan’s oil came from the U.S.) left it – so its leadership believed – little choice but to launch an attack on the US, wagering, incorrectly as it turned out, that the US would have little stomach for a war in the Pacific.

Fast forward to today and we see a similar dynamic at play: Russia, shunned by the West, its economy in peril, its population solidly behind its leadership, now has even less of a motive to come to some sort of terms with Kiev and its Western patrons. Those advocating further sanctions and cheering on the collapse of the RUB might do well to reflect on GWF Hegel’s admonitory axiom: the owl of Minerva spreads its wings only with the falling of dusk. And to borrow a line from the bard of Duluth: it’s not dark yet, but it’s getting there. Wisdom is likely to come only once it’s too late; perhaps Congress and the President will only get the picture once Russian armor is rolling towards the Dnieper. And probably not even then.

In the face of the collapse in both the price of oil and the value of the RUB last week, President Obama signed a bill this past Thursday which authorizes him to both impose further sanctions on Moscow as well as send $350 million worth of arms to Kiev. On Friday, the president announced he was tightening the economic embargo on the Crimean peninsula while imposing penalties such as visa bans and asset freezes on a number of pro-Russia separatists in eastern Ukraine. These moves, given the circumstances, can only serve to reinforce the Russian president’s conviction that the ultimate aim of Western policy is regime change. This being the case, we cannot rule out a deepening and hardening of the Russian position, nor should we now rule out another Russian incursion into Ukraine.

After all, what has Russia now to lose?