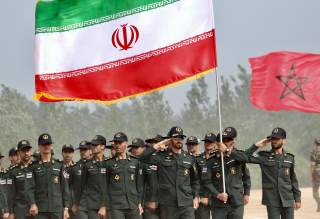 President Donald Trump in his State of the Union address called on Congress to “address the fundamental flaws in the terrible Iran nuclear deal,” echoing a previous statement that he would walk away from the accord unless Congress and Europe agreed to new restrictions on Iran. The fate of the deal now rests on how Europe and America respond to each other and to Iran.

While Europe has been pressing the Trump White House to not leave the deal, formally known as the Joint Comprehensive Plan of Action (JCPOA), European officials have latched onto U.S. criticisms of Iranian missiles and regional policies and have reportedly begun working group consultations with the United States to discuss Trump’s wants.

Trump’s withdrawal threat is aimed at creating Western consensus on imposing new multilateral sanctions on Iran for its regional and ballistic-missile policies. While Kamal Kharazi, Iran’s Strategic Council on Foreign Relations chief, has stated that Iran could stay in the JCPOA if Europe remained committed and “continues economic activities” with Iran, the deal would collapse if Europe joins the United States in pursuing new sanctions.

The fact is that existing U.S. policies already curtail international trade with Iran in violation of the JCPOA. If Europe seeks to preserve the deal, then it must fill the gap in sanctions relief—not agree to more punitive measures. Putting Iran in the position of abiding by the deal’s constraints while receiving none of its benefits would ensure its demise, which Trump has long yearned for.

To understand why a new coercive approach towards Iran is bound to lead to dangerous escalation, it is helpful to review the history of the negotiations that led to the JCPOA.

In a paper for the Washington Quarterly’s Fall 2017 issue, we outlined the principal lessons offered by the nuclear negotiations for relations and future diplomatic engagement between Iran and the West. While Trump appears to believe that the United States can coerce Iran to its desired path, with only a matter of applying more pressure for a longer period, his untenable conditions to “fix” the JCPOA promise dangerous escalation.

During the Bush era and Obama’s first term, maximalist U.S. demands such as zero uranium enrichment did not result in Iran capitulating, even in the face of an unparalleled international-sanctions regime. Instead, Iran expanded its own bargaining chip of nuclear capacity—including by increasing its number of centrifuges and level of enrichment—and attained a breakout window of as short as one month.

Similarly, to pressure Iran now for its regional and missile policies will not result in Iran backing down, but rather will create a new escalation cycle as Iran will seek to secure its core interests. For example, while Iran has voluntarily limited the range of its ballistic missiles to two thousand kilometers, Iranian military commanders have said this could be increased in response to foreign pressure. Likewise, Iran may respond to efforts to isolate it by strengthening regional anti-Western alliances.

What led to the JCPOA was President Obama leaving the war-path escalation entailed and both sides deciding to cash in their respective bargaining chips of nuclear capacity and sanctions. They met each other’s demands half way: the United States accepted Iran’s right under the nuclear non-proliferation treaty (NPT) to use the nuclear fuel cycle for peaceful purposes, and Iran agreed to transparency and inspection measures beyond anything agreed to by an NPT signatory to boost confidence in the peaceful nature of its nuclear program.

Accordingly, if Europe and the United States seek regional cooperation with Iran, then they must acknowledge that Iran—as any sovereign state—has legitimate security concerns and a right to defensive capabilities. Realistic U.S. and European efforts to foster regional peace must focus on promoting a balance of power between regional powers such as Iran and Saudi Arabia, not on inflaming their differences. Regional stability will also not be served by scuttling the JCPOA, which could spark an arms race, but can be enhanced by drawing on its tenets to realize a Middle East free of nuclear weapons.

The JCPOA showed that constructive engagement between the Iran and the West is possible, provided there is mutual acknowledgement of legitimate interests and solutions are “win-win.” With that said, Iran has no reason to trust in any new negotiation unless the West fully and properly implements its JCPOA obligations.

Seyed Hossein Mousavian is a Middle East security and nuclear policy specialist at Princeton University, former spokesperson of Iran’s nuclear dossier and author of Iran and the United States: An Insider’s View on the Failed Past and the Road to Peace.