The Dangers of Sanitizing Deng Xiaoping 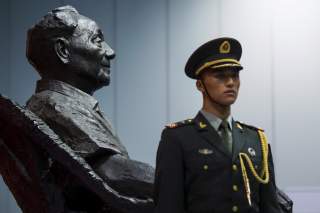 “We Chinese do not want another emperor,” the businessman told me. We were in a crowded restaurant in a large Chinese city. It was early in 2018. Shortly before, the central government under Xi Jinping had officially altered the constitution to cancel term limits, arguably the Chinese president’s most daring consolidation of power since taking office. There was an implicit message in the sentence. If Xi Jinping could be viewed as another emperor, the “core,” then the leaders that came before him were preferable to Xi. The former leaders were fair, in comparison.

On May 31, 1989, former Chinese leader Deng Xiaoping delivered a speech to a select number of officials: “We must form a promising collective leadership that will carry out reform.” Deng sought to build a system within the party-state where technocratic meritocracy reigned, where the concentration of power was dispersed among a group of leaders striving for consensus, a need deeply felt in a country still recovering from the fever dream of famine and struggle sessions beating to the drums of revolutionary slogans. The May 31 oration is under-studied. Yet Deng’s remarks at that meeting represent the clearest illustration of the former Chinese leader’s political philosophy. Deng’s model for collective leadership represents a radically different vision from the increasing centralistic governance of today’s China. That difference could lead to the elevation of Deng Xiaoping’s reputation, fulfilling the late leader’s wish, with consequences to both the legitimacy of Chinese liberal discourse and international understandings that motivate policy decisions on China.

For the decades since 1989, Deng Xiaoping’s legacy has been justifiably marred by what occurred only five days after delivering his remarks on collective leadership on May 31. June 4 was a day that lived in infamy. The Chinese leader with the cowboy hat, the darling of American media and the friend of former President Jimmy Carter, was complicit in a massacre. Deng Xiaoping was condemned in chorus around the world; sanctions were erected around the People’s Republic of China before being torn down a few years later. Reform-minded people in China—many students, capitalists, legal scholars and others for whom the open society was the goal of societal progress—were horrified. The crackdown damaged Deng’s legacy and complicated understandings of Deng Xiaoping’s collective leadership model. If not for the massacre, then the collective leadership model might otherwise have enshrined Deng as a modern political saint.

The rise of Xi Jinping has changed that long-standing view of Deng Xiaoping. The man who would undo Deng Xiaoping’s collective leadership was a secretary of a small prefecture Party committee in southern China’s Fujian province when Deng delivered the speech. Xi Jinping has implicitly signaled a strikingly different view on the collective leadership model outlined on May 31, 1989, than his predecessors. Yet even as Xi Jinping buries the Dengist system under “national rejuvenation” and Mao-like cult of personality, the current president may unwittingly be fulfilling Deng Xiaoping’s wish to be remembered as a reform leader. As written by Jude Blanchette: “[Deng Xiaoping’s legacy] had been tarnished by his support for the violent suppression of the Tiananmen Square protests. Although unapologetic about this decision—it was, after all, a matter of national survival in Deng’s mind—this was not the way he wanted to be remembered.” By throwing away the Dengist system, tossing the collective leadership model in the bins of history, Xi Jinping may be giving Deng Xiaoping’s legacy its only ticket out of that purgatory. In comparison to Xi, Deng Xiaoping appears less dictatorial, more reformist.

While the collective leadership model does represent a better political structure than one designed around the “core leader” of today, one must be careful to avoid sanitizing Deng Xiaoping’s tarnished image. Chinese liberals must be especially cognizant of the danger of whitewashing Deng given their political incentive to hold up Deng Xiaoping as a latent hero. In recent years, Mao has been resurrected through political nostalgia by China’s most virulent nationalists. The Neo-Maoists have weaponized Mao to critique the Chinese government for perceived failures ranging from breaking the “iron rice bowl” of social benefits to insufficient anti-Japaneseness. The rhetoric of Neo-Maoism is nationalistic, laced lethally with a revisionist nostalgia reminiscent of “Make America Great Again,” but based distinctly in the Chinese context. That “localizing” of the political movement has made the Neo-Maoist cause a thorn in the government’s side. Openly stamping out Neo-Maoist discourse places the party-state in seeming direct conflict with the founding father of the party-state itself.

Deng Xiaoping is potentially susceptible to the same weaponization as Mao.  While Xi Jinping’s leadership represents a marked abandonment of the Dengist model, Xi cannot reject Deng Xiaoping outright. The party-state is unified; part of its legitimacy rests on a foundation of continuity and consistency. Openly stamping out potential Dengist ideology could provide evidence of disunity. The challenge that stamping out Dengist rhetoric presents the party-state makes the adoption of such a strategy a tempting answer to an accusation often used to dismiss Chinese liberalism: that the ideas are foreign-influenced, that democracy cannot work in China. If a rose-colored idea of Mao can be resurrected by one side of the political spectrum, then so can one of Deng Xiaoping by the other side.

Yet while Mao Zedong has become a political weapon of Neo-Maoists, the people who “do not want another emperor” should not follow suit. Adopting the same strategy as nationalists would deal irreparable damage to Chinese liberal authenticity and make a sanitized Deng equivalent to consensus across all political shades of opinion. Shrouding liberal ideas within Dengist revivalist language could permit protection of speech in the short run but there is no guarantee that Deng Xiaoping can elicit the same emotional response that Mao Zedong does among the masses. The symbolic power will be less effective. Further, given the existing vulnerability of liberalism in China, Dengist expression may be stamped out by the party-state with less hesitation than Neo-Maoist agitation, regardless. For the small chance of successful short-term expression, liberals would implicitly agree to whitewash the leader who dealt a decisive blow to an entire generation of similar-minded intellectuals. That would clear Deng Xiaoping’s name and fundamentally harm liberal credibility. If even the liberals are guilty of ignoring 1989, then how can they possibly critique the party-state on other human rights issues that arise in modern China?

Beyond impacting Chinese liberal legitimacy, Deng Xiaoping’s sanitization may also change international understandings of China, erasing Tiananmen Square one essay at a time. In one simple write-up of Chinese political history, Deng’s “system of ‘collective leadership and orderly succession’ is described as a “new tradition” until Xi “turned back the clock.” Such a description does not include the significant fact that the collective model was purchased at the price of thousands of lives on June 4, 1989. Leaving out Tiananmen may be understandable. The massacre may not seem relevant. An uncritically positive view of the Dengist model is incentivized in an age when Uighurs are locked up in mass ethnoreligious concentration camps when civil society is smashed one organization at a time when Xi Jinping has overseen the slow strangling of human rights in the People’s Republic of China. There is a political and moral incentive for analysts to view Deng Xiaoping positively, in retrospect, to emphasize the horrifying extent of the current regime.

Yet these are not adequate justifications to ignore 1989. Neither Deng nor Xi are heroes. Deng Xiaoping is to Xi Jinping what an illiberal figure like Turkey’s Recep Tayyip Erdogan is to Syria’s Bashar al-Assad: two shades of the same color, both authoritarian. Any time that Deng Xiaoping is posited as a better leader than Xi Jinping, his complicity in the massacre on June 4 should be noted.

Travis Sanderson is a freelance writer. His work has previously been published in Diplomat Magazine, New Bloom Magazine, and the Japan Times.