Dark Days Ahead for Ukraine 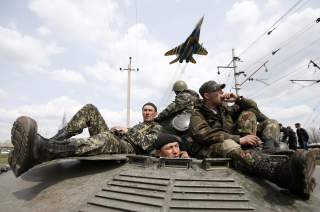 During a panel at the Center for the National Interest on September 20, two experts sought to tamp down what they dubbed as undue optimism in the United States and Western Europe regarding Ukraine’s future. Keith Darden, an associate professor at American University’s School of International Service (SIS), set the tone with the observation that “Historically, optimism has been a bad thing for peace.” He said that the consensus among Western foreign policymakers is that Ukraine is on a positive trajectory, while Russia is on a negative one with time running against Moscow. The other panelist was Samuel Charap, a senior political scientist at the RAND Corporation.

Both Darden and Charap made the case that this overly positive assessment is not borne out by Ukraine’s domestic or international situation. Darden noted that Ukraine remains “regionally divided in a way that threatens its territorial integrity.” Another challenge is corruption, which is deeply ingrained. He said, “Ukrainian corruption takes the form of various complicated schemes to siphon money out of the state budget.” Ukraine is deficient in natural resources, and, therefore, the main mechanisms that enable the budgetary corruption, according to Darden, are the gas trade and control over state-owned corporations. Ukraine has been able to sustain this corruption and delay badly needed reforms by playing up its geopolitical significance, because “historically, either we [the U.S./Europe] or the Russians have bailed them out.”  The third challenge Darden outlined was that Ukraine remains “highly unstable.” This instability is a product of its “pluralism by default,” where “the country is so fractious, essentially, you can’t build a consistent pyramid of power.”

In a similar vein, Charap called in to question three assumptions about Ukraine’s external environment. Firstly, it is believed that Russia will weaken, which will force it to change its position on Ukraine. Charap challenged this by citing new IMF data which shows that “Russia has recovered from the recession of 2015-2016, and output was up in 2017 by 1.5%. Inflation in mid-2018 has hit a post-Soviet low of about 2%, and growth is expected to settle at about 1.5% over the medium term.” Secondly, many assume that the West will maintain unity in applying economic sanctions that pressure Moscow until it relents and draws down in Ukraine. He said that “the transatlantic consensus on sanctions that existed essentially to the end of the Obama Administration is no longer.” He mentioned the Countering America’s Adversaries Through Sanctions Act (CAATSA), which was signed into law in August 2017, is not consistent with European Union sanctions policy.  Also, the American withdrawal from the Joint Comprehensive Plan of Action (JCPOA) creates the situation where “American sanctions which now, essentially, target European firms.” Thirdly, he said it is believed that the Ukrainian military has become more effective and efficient and faces only “a low military downside risk of further Russian incursion because of the cost that the Ukrainians could impose on a Russian invasion.” He drew the audience’s attention to the military buildup along Russia’s Western and Southern Military Districts that “would make quick work of the Ukrainian military.”

The speakers also raised a series of questions that suggest Ukraine has a challenging road ahead. For instance, how can Ukraine be united or become united if Petro Poroshenko, the current president, continues to take divisive actions such as pushing for a Constitutional Amendment that Ukraine should be a North Atlantic Treaty Organization member? How can the country heal if Poroshenko wants to transfer religious authority from the Patriarch of the Russian Orthodox Church to the Ukrainian Orthodox Church Patriarch? How can the country accede to NATO if—by some polls—less than half of the population supports membership? How can Ukraine rely on Western support, when Russia has far more at stake and a strong military edge in its immediate near abroad?

Charap urged Western policymakers to adopt “a sense of urgency” in seeking a settlement of the Ukraine conflict. He cautioned that the United States and Europe “may need to rethink the idea that we have all the leverage” and “that compromise now, may be less painful than compromise later.”

Mark Munson is a U.S.-Russia relations intern at the Center for the National Interest.

Image: A fighter jet flies above as Ukrainian soldiers sit on an armoured personnel carrier in Kramatorsk, in eastern Ukraine April 16, 2014. Ukrainian government forces and separatist pro-Russian militia staged rival shows of force in eastern Ukraine on Wednesday amid escalating rhetoric on the eve of crucial four-power talks in Geneva on the former Soviet country's future. REUTERS/Marko Djurica