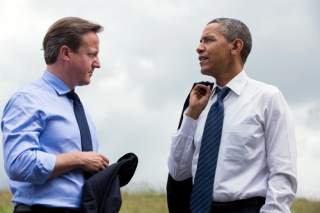 For a British prime minister, believe it or not, an audience with Barack Obama remains a source of excitement. British voters still like Obama—assuming, somewhat glibly, that America’s falling out with its leader is proof of its inherent anti-liberalism or racism. For United Kingdom politicians, a press conference in the White House is a good photo op. And a press conference with Obama in the wake of a shocking terror strike in Europe is simply too good to miss.

Today, then, David Cameron is making great show of standing shoulder-to-shoulder with the president in Washington. Their message is clear: the United States and UK must show unity in defense of freedom, security and prosperity. Such a stand endows Cameron with global gravitas—no bad thing in the run up to what will be a hotly contested general election in May.

“We reaffirm our belief that our ability to defend our values is rooted in our economic strength and the values that we cherish—freedom of expression, the rule of law and strong democratic institutions,” trumpeted the two leaders in a joint opinion editorial in today’s London Times. “As we were reminded so tragically again in Paris last week, terrorism, conflict and instability threaten the values that define us a free peoples.”

Amen to all that.

But the British, like the Americans, have good reasons to doubt the sincerity of their leaders’ commitment to free speech. In the hours following the attack on the satirical French magazine Charlie Hebdo, Cameron said all the right things. Britain “will never give up” the “absolutely essential” value of free speech, he said. He marched on the “Je Suis Charlie” rally in Paris on Sunday, holding President Francois Hollande’s hand and looking moved.

Within a few hours of the march ending, however, he seemed to be delivering an altogether different message, threatening the public with more government surveillance, more state control. He quickly repeated his commitment to the so-called “snoopers charter,” which would enable the state to keep indefinitely information about every private email or telephone call. Further, he wants to shut down social-media systems—such as Whatsapp or Snapchat—which use encryption methods so sophisticated that security agencies can’t crack them. “I think we cannot allow modern forms of communication to be exempt from the ability, in extremis, with a warrant signed by the Home Secretary, to be exempt from being listened to,” he said. “That is my very clear view and if I am Prime Minister after the next election I will make sure we legislate accordingly.”

It is understood Cameron will press Obama on this point during their meeting at the White House. To defend our liberties, he believes, he has to breach them. Freedom isn’t free, and so on.

But the British are now all too familiar with how security laws intended for extreme circumstances come to be abused. Government measures to keep an eye on terrorists—most notably the 2000 Regulation of Investigatory Powers Act—have ended up being used by the British police and local authorities to spy on journalists, or monitor fly tippers, or snoop on parents who bogusly claimed to be in the right “catchment zone,” as it’s called, in order to get their children into a good school.

The British are increasingly aware that, while we all like to preach free speech, in reality we must keep mum on all sorts of subjects. More and more, British police forces arrest people for things they’ve said on Twitter or Facebook. Following the News international telephone-hacking scandal, when it emerged that British tabloids had been spying on celebrities (a criminal act), there was a concerted lobbying attempt to censor the press. Officers recently launched a probe into media airhead Kate Hopkins—think Ann Coulter and add stupidity—because she cracked rude jokes about the Scottish.

The UK media does a good job of gagging itself, too. Almost every newspaper was eager to declare “Je Suis Charlie,” but all were reluctant to publish offensive cartoons. The journalist Brendan O’Neill wrote a brilliant article over the past weekend about what would have happened if Charlie Hebdo cartoons had been published in the UK. He imagined, all too plausibly, that an Anglo Hebdo would have been closed down by a concert of online petitions, social-media outrage and horrified articles in the bien-pensant press.

The British are hypocritical, then, when it comes to free speech—and in the wake of the Paris killings, there is an appetite for clarity. But it doesn’t help when our prime minister exhibits the same double standard on the world stage. Rather than using the latest terror scare to enhance the security state, he and President Obama could think more deeply about what freedom ought to mean.

Freddy Gray, deputy editor of the Spectator, is a regular contributor to the National Interest.