Dawn of the Drones 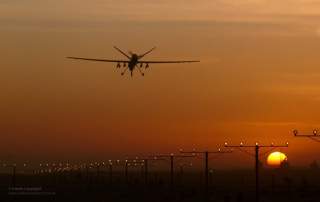 We are living in a drone saturated world. In recent years, drones, or unmanned aerial vehicles (UAVs) have proliferated rapidly around the globe in both military and civilian spheres. Today, eighty-seven countries are known to operate drones, including ten that possess armed drones. An additional twenty countries, at a minimum, have armed drone programs in development. As this technology continues to proliferate, simple weaponized drones will increasingly be within the reach of virtually any state, non-state actor, or individual. There has been significant discussion of the implications of the proliferation of high-end military-grade drones to date; however, the proliferation of cheap, commercial off-the-shelf drones and components is less well understood—and could potentially have a greater impact on national security.

While hobbyist drones have been on the market for some time, recent technological advances have moved the system’s capabilities well beyond the relatively crude models previously operated by joystick consoles and constrained by line-of-sight operating restrictions. Indeed, hobbyist drones—available for purchase for no more than a few thousand dollars—enable a number of high-end capabilities that were formerly the monopoly of major military powers.  Many hobbyist drones, including the best-selling DJI Phantom, are now equipped with GPS and waypoint navigation systems that enable autonomous flight. These systems can also be equipped with high-definition video cameras and infrared thermal cameras that, when combined with video downlinks, can provide real-time intelligence, surveillance, and reconnaissance (ISR) capabilities.

Already, non-state actors have used hobbyist drones for warfighting purposes. The Ukrainian military has made extensive use of hobbyist systems, including modified DJI Phantoms and other reconfigured hobbyist drones, in its conflict with the self-declared Donetsk People’s Republic, a rebel group backed by Russia. Reports indicate that the Islamic State of Iraq and Syria has also used hobbyist drones for surveillance purposes. Usage of these systems will almost certainly expand with falling prices and improved ease of use.

With this continued proliferation will come increased prospects for the disruptive employment of hobbyist systems by both individuals and non-state actors. Most concerning is the potential that such systems could be weaponized. Though hobbyist drones have relatively short range and limited payload capacity, they have been successfully used to smuggle drug packages and could be modified to carry several kilograms of explosives, firearms, or other damaging objects instead. Indeed, hobbyist drones could be employed as airborne IEDs against patrolling military personnel, potentially requiring a paradigm shift in ground warfare for the United States. They could similarly be used in a terrorist attack against civilians or in precision strikes against high-profile individuals or landmarks. As the Wall Street Journal has reported, numerous terrorist plots involving drones have been detected in the United States, Germany, Spain, and Egypt, and more can be expected in the future.

This is particularly the case given the difficulty of monitoring and tracking hobbyist drone use. As a result of the construction material, small size, and flight altitude of most hobbyist drones, they are rarely visible on radar, and thus more challenging to defend against than larger, military-grade systems. For this reason, defenses against hobbyist drones often require visual or auditory identification or concerted signal-jamming to disrupt the operator’s communications link with the system and/or the system’s GPS. Such detection methods, however, require either a pre-existing knowledge or expectation of the system’s presence in a given area and thus are markedly less effective against unanticipated use.

As autonomy and multivehicle control become more mature, it is also possible that disruptive actors could deploy swarming attacks of expendable hobbyist drones against U.S. or allied military assets. While this approach would produce a large, easily detectable radar cross-section, it would additionally complicate targeting. In this way, swarms of UAVs could be used to temporarily deny the United States access to airspace within a given area of operations or to overwhelm U.S. air defense systems for ships and bases. Such a development could have significant consequences for U.S. and allied military operations as well as for the broader international security environment.

Despite their potential hazards, drones have a wide range of beneficial commercial applications and, as a result, are certain to become increasingly sophisticated, accessible, and affordable in the years to come. As these systems continue to proliferate, it will be vital for the United States to consider the implications of this dawning strategic landscape and to develop viable defenses against the disruptive use of hobbyist and other commercial drones.

Kelley Sayler is an Associate Fellow at the Center for a New American Security.