DC Statehood Is a Fool's Errand 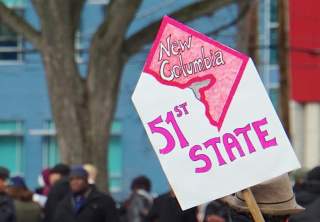 Say this for the proponents of DC statehood: they’re persistent. Pursuing what the sympathetic editorial board of the Washington Post calls “the longest of long shots,” they press on, despite the inestimable constitutional and political hurdles before them. In mid-April, DC Mayor Muriel Bowser released an ambitious plan to make “New Columbia” the nation’s fifty-first state. Days later, members of the city’s New Columbia Statehood Commission voted unanimously to back the plan, which calls for a constitutional convention to ready a DC statehood advisory referendum for DC’s November ballot. And in early May, the commission released a draft constitution at President Lincoln’s historic cottage.

Why the full-court press? Political opportunity: the mayor and the commission don’t want to be “flat-footed” after the next president and Congress are elected. They want a “complete package” from DC voters to be ready for what the mayor thinks “is going to turn out to be a historic election in November.” Included in that package will be a fifty-state outreach program, a plan for lobbying businesses as well as politicians at the presidential conventions, and a proposal for the new boundaries of New Columbia.

To start, the proposal, based on the stillborn New Columbia Admission Act of 2013, contemplates leaving in place as “the District” a tiny federal enclave consisting of the National Mall and the bits of land and certain buildings that immediately surround it: the White House, probably the Supreme Court and perhaps a few other buildings, all to be determined. Call it “New Washington”—it would be a shell of what we think of today as “Washington, DC.”

The Constitution, however, draws no distinction between “the Seat of the Government of the United States” and the “District” in which the government is seated. In fact, the District just is the seat of the government. As the Enclave Clause of Article I, Section 8 says in relevant part: “The Congress shall have Power To exercise exclusive Legislation in all Cases whatsoever, over such District (not exceeding ten Miles square) as may, by Cession of particular States, and the Acceptance of Congress, become the Seat of the Government of the United States.” To be sure, the Framers did not set a minimum size for the seat of the new government. Seizing on that fact, statehood proponents claim that they can carve out a tiny enclave from what for over two hundred years has been the seat of the federal government, call it the (new) District of Columbia, or whatever else they might want to call it, and turn the rest of today’s district into a new state—all without amending the Constitution. It’s a tall order, and most certainly to fail.

As I argued during Senate hearings on the 2013 bill, and as many others have argued over the years, although the Framers did not set a minimum size for the district, their mention of “ten Miles square,” together with Congress’s nearly contemporaneous creation in 1790 of a district ten miles square from land ceded to the federal government by Maryland and Virginia, is strong evidence of what they intended—and strong evidence, too, against this enclave scheme. In effect, the proposal would strip Congress’s present authority over today’s District of Columbia simply by redefining “the District.”

The proposal’s constitutional problems don’t end with that text and its implications, however. In fact, they go to a core constitutional principle, the doctrine of enumerated powers, which holds that Congress has only those powers that are enumerated in the Constitution, mainly in Article I, section 8. And Congress has no power to carve out a fifty-first state from the present District of Columbia. That point was well stated in 1963 by no less than then Attorney General Robert F. Kennedy, ruling on a related proposal. And the point has been repeated by every Justice Department since that has addressed DC statehood and related questions. All, with one exception, have concluded that Congress has no authority to alter the status of the District legislatively. That one exception was Attorney General Eric Holder—not surprisingly, given the Obama administration’s constitutional record. After receiving a similar opinion in 2009 from the department’s Office of Legal Counsel regarding a DC voting rights bill then pending in Congress, Holder “rejected the advice and sought the opinion of the solicitor general’s office. Lawyers there told him that they could defend the legislation if it were challenged after its enactment.” The ambiguity is precious: of course the solicitor general’s office “can defend” the legislation; it’s the job of that office “to defend” all legislation, no matter how unconstitutional it might turn out to be.

But there’s more. Just as the original creation of the District required the consent of the contributing states, so too, as with all agreements, does any change in the terms of that grant require the consent of the parties—and Maryland has given no indication that it would consent to having a new state created on its border from what was formerly part of the state. At the least, previous proposals have received little support from the free state.

Finally, the Twenty-Third Amendment, which provides for the popular election of electors for president and vice president from the District “in such manner as Congress may direct,” would have to be repealed. Ratified in 1961, the amendment pegs the number of electors to which the District is entitled “to the whole number of Senators and Representatives in Congress to which the District would be entitled if it were a state, but in no event more than the least populous state.” Plainly, those who wrote and ratified the Twenty-Third Amendment envisioned a district of a certain size—“as if it were a state.” But again, “the District” under this proposal—“New Washington”—would be a tiny enclave around the Mall, probably including the White House and hence the presidential family and perhaps a few hundred or thousand others. But under this proposal, their votes for presidential electors would be vastly more weighty than those of their fellow citizens. Yet those votes cannot be taken away by a mere statute. They’re guaranteed by the Constitution. The Twenty-Third Amendment must therefore be repealed—by the amendment process, not by statute.

But apart from those constitutional problems, numerous practical problems surround this proposal. As James Madison argued in Federalist 43, we needed a “federal district,” separate and apart from the territory and authority of any one of the states, so that Congress could exercise “exclusive” jurisdiction over that district, thus keeping the federal government from being dependent on any particular state—and, equally important, so that no state would be either dependent on the federal government or disproportionately influential on that government. This proposal fails on each of those counts.

Surrounded by this new state, the federal government would be dependent on it for all manner of services, everything from electrical power to water, sewers, snow removal, police and fire protection, and so much else that today is part of an integrated jurisdiction under the ultimate authority of Congress. Yet Congress would have no ultimate authority over any of that, as it does today. The fifty-eight-page constitution that DC voters ratified in 1982, including provisions that require the new state to provide jobs or adequate incomes to all city residents and allow firefighters and police the right to strike, does not give confidence.

But neither would New Columbia be independent of the federal government, practically. In Federalist 51, Madison discussed the “multiplicity of interests” that define a proper state, with urban and rural parts, and economic activity sufficient and sufficiently varied to be and to remain an independent entity. That hardly describes the District of Columbia. Washington is largely a one-industry town (though not as much as it used to be), with its economy closely tied to the federal government, and that would not likely change if most of the city became a state. Indeed, New Columbia would be our only “city-state.” No longer under the exclusive authority of a Congress that would now be dependent on it, New Columbia would be in a position to exert influence on the federal government far in excess of that of any other state. The potential for “dishonorable” influence, about which Madison warned, is palpable. A district so reduced as “New Washington” would be under this proposal would be utterly dependent and unable to effectively control its place of business, rendering it susceptible to such influence.

Let’s be honest, however: constitutional and practical reasons aside, in the end, this proposal is going nowhere mainly for political reasons. Even if Congress had the power to do so, in a deeply divided nation, where a closely divided Senate determines ultimately who sits on a closely divided Supreme Court, few if any Republicans are going to vote to create a most unusual state from a district that has never elected anyone other than a Democrat to citywide office in an open election. When an amendment to afford greater representation for the District was put before the nation in 1978, only sixteen states had signed on by the time the allotted period for ratification had concluded in 1985. Outside the Beltway, there is little support for even that kind of change.