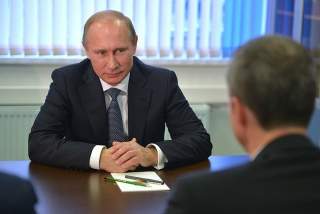 With Russia and Ukraine trading blame for the apparent breakdown in their tenuous September 5 cease-fire agreement, the stage is being set for an even more dramatic confrontation between the West and Russia. Ukraine and NATO are accusing Russia of dispatching fresh weaponry and troops into disputed eastern territories as a possible precursor to a fresh offensive. Meanwhile, Russia has announced that it will expand its long-range bomber missions to include the Gulf of Mexico. Before the situation deteriorates any further, President Obama should push for a diplomatic settlement that preserves Kiev’s independence but avoids a lasting geopolitical confrontation with Moscow that is detrimental to vital U.S. national interests.

Russia’s behavior in Ukraine is a direct challenge to the post-Cold War order in Europe.  On top of this, Russian officials have exacerbated a pre-existing breakdown in mutual trust by denying involvement in Ukraine even as leaders in the governing United Russia Party claim credit for providing heavy weapons and other aid on Russian television.  When rebel leaders simultaneously acknowledge the presence of active-duty but “vacationing” Russian military personnel in Ukraine, it is hard to take Moscow’s pronouncements seriously.  The fact that many of the original rebel leaders in Donetsk and Lugansk were not locals and had Russian nationalist backgrounds adds to the sense that Russia was behind their actions.

Nevertheless, Russia’s conduct in Ukraine did not initially threaten vital U.S. national interests as will be explained below. But as the U.S.-Russia confrontation over Ukraine continues and intensifies, America’s vital interests may be increasingly at stake.  Unfortunately, because those interests are complex and multi-dimensional, the United States cannot protect all U.S. interests through simple and one-dimensional responses like more pressure on Russia or more engagement.

What should the United States do?  The essential first step is to acknowledge that Washington’s current approach has been ineffective and that the present fragile cease-fire in Ukraine is no basis for complacency. Quite the contrary.

Any new policy requires both conceptual clarity and, even more important, the political will to develop and implement a strategy that will genuinely advance U.S. national interests and particularly U.S. vital national interests.

The Obama administration claims that its policy—based primarily on imposing costs on Russia through several rounds of sanctions—is working. Certainly the administration has successfully collaborated with the European Union and other key allies like Canada, Japan, and Australia to impose sanctions and voice its moral outrage for Moscow’s actions.  The West at present stands united in the face of Russia’s intervention in Ukraine, which is certainly quite important, and it was neither easy nor automatic to achieve this unity.  Still, U.S. policy is only “working” if the West can alter Moscow’s calculations and therefore its conduct.  So far, sanctions have not prevented Russia from meddling in Ukrainian affairs and they appear unlikely to change its behavior in any substantial way in the period ahead.

What have sanctions accomplished?  It is not easy to measure their economic impact because the policy has coincided with a significant decline in energy prices, a development that discourages both foreign and domestic investors and significantly pressures the ruble, which has declined since February 28 by 24 percent in value to the dollar.  Still, because the Russian federal budget requires oil prices above $90 per barrel to avoid deficit spending, the sanctions are likely contributing to Russia’s economic troubles, especially by curtailing critical long-term investment in energy exploration and by contributing to inflation that is beginning to hurt ordinary Russians.

If curtailing Russia’s economic growth (not significantly by most analyses) and punishing Russian consumers are the primary goals of U.S. and European Union policy, then the sanctions could be considered a limited success.  Conversely, if the Western objective is to change Russian behavior in Ukraine or, more broadly, to tame Putin’s defiant foreign policy, then neither developments in Russia nor the history of sanctions elsewhere provides much basis for optimism.  At the very same time, the sanctions and Obama’s broader policy toward Russia may produce unintended but predictable consequences that jeopardize American national interests.

The United States wields an unparalleled combination of military power, economic might, leverage in the international financial system, and strong alliances. It also possesses a political and economic model that appeals even to some detractors of U.S. policies.  There can be no doubting that America can afford to be far less selective, and far less careful, pursuing its interests and values than any other nation.  Still, however great America’s power and freedom of action, they are not unlimited.

The history of Washington’s interventions from Vietnam to Iraq offers a clear reminder of the limits of American power.  What this history also demonstrates is that the American people may be willing to start optional wars, but will not support them forever or at any cost.  When voters are not reacting to an attack or to a clear and direct threat to United States, the U.S. political system, more often than not, is ill suited to sustain long-term conflicts, where victory is elusive and sustained patience is mandatory.

Less obvious, but still significant, are the limits imposed by the international system as a whole and particularly by other major powers.  While weaker than the United States, other major powers alone or especially in combination may have the capabilities and determination to stand up to Washington at specific times in specific places.  The United States should take these international realities especially seriously when dealing with a Russia that has a powerful strategic nuclear arsenal, a global presence that includes regional superiority in key areas along its frontiers, and an acute sense that its own existential national interests are at risk in the Ukraine crisis.

Expecting Russia to react to U.S. pressure like a smaller and weaker version of the United States or, alternatively, like a bigger but still relatively feeble analogue of Serbia in the 1990s, is dangerously misguided. Russia has its own style of conducting war. It has a tendency to be initially ill-prepared, to conceal its activities in a fashion unusual for democratic states and then to fight fiercely with little concern for casualties both in terms of human lives and damage to its own economy—the 26 million lives lost in World War II provide a potent reminder of that disposition. When the Obama administration asserts that we are not in a Cold War with Russia today, it engages in a wishful thinking coupled with political convenience. Unfortunately, whatever administration officials may think, a new Cold War is already starting and, while it may differ in important respects from the U.S.-Soviet rivalry, it could produce a real war and the attendant dangers of nuclear conflict. And the fact is that Russia’s leaders see it this way.

In this context, America needs to define clearly what U.S. vital national interests actually are.  As we see it, vital interests are those truly essential to safeguard America’s survival and well-being as a free and secure nation.  Russia can thus directly affect at least three vital U.S. interests:

-Maintaining, including through America’s alliance systems, a balance of power in Europe and Asia that promotes peace and stability with a continuing U.S. leadership role; and,

-Preventing large-scale or sustained terrorist attacks on the American Homeland.

Russia is self-evidently the only country that could destroy America as we know it in 30 minutes with strategic nuclear weapons.  Russia also has ten-to-one superiority in tactical nuclear weapons in Europe.  The Obama administration and most of the U.S. national security elite may not consider this important in the conviction that U.S. strategic nuclear forces will deter Moscow from using its tactical weapons. Such complacency is unwarranted. Russian military doctrine assesses that this superiority provides Moscow with escalation dominance and Russian officials may believe that their regional nuclear dominance would deter an American response.  This creates a clear and present danger.

Recent events have already demonstrated Russia’s ability to act on its revanchist instincts in Europe and the disturbing consequences that its actual and possible actions can have for not only U.S.-led alliances like NATO, but also the global balance of power.  U.S. policymakers should not want to face a choice between risking nuclear conflict in Europe or appearing unable to deliver on its security obligations to NATO partners and, by implication, to America’s Asian allies.  Likewise, as the United States strives to manage China’s emergence as a global power, it is not in America’s interest to have Moscow encouraging Beijing to challenge the United States and providing additional opportunities to do so.

Though Russia is clearly not in the same league as the United States in political, economic or military terms, if Moscow chose to become a global spoiler and actively sought to undermine U.S. policies it could significantly endanger vital U.S. national interests, including in combating terrorism and pursuing non-proliferation.  Moscow could also increase even more the gridlock in the United Nations Security Council.