Dealing with Saudi Arabia and Turkey as They Are, Not as We Want Them to Be 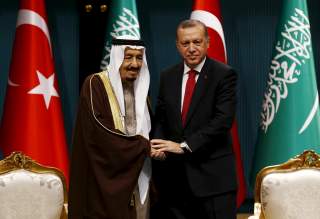 Khashoggi was murdered by Saudi Arabia. For all practical purposes, we knew that from the start. Yet we're still focused on whodunit. We shouldn't be.

President Donald Trump rightly says that there are larger national interests at stake. This is reminiscent of President Richard Nixon, who often stood stoically behind national interests while the media filled the public discourse spaces with moral outrage. That was heroic, but some of Nixon's most important policies eventually collapsed for want of public support. Realism is not realistic when it fails. More is needed than being right. Trump needs to use his communications skills to get enough of society behind him on the importance of national interests.

Trump is also right that we shouldn't trust Turkish claims without verification. However, he fell into the Turkish trap when he proceeded to talk about the specific evidence and make it the main issue. He needs to focus the country on the larger issues:

First, are Turkey and the Saudis our allies, enemies or frenemies?

Second, how do their crimes measure against other countries, and against our interests with them?

Third, how should we deal with their crimes?

Fourth, how should we make the best of the relationships?

Both are frenemies. Turkey is on paper a major ally in NATO, but it is becoming more of an adversary in practice. Even on Syria and the Islamic State, it has been a frenemy. We are the main enemy in Turkey’s domestic political narrative.

Saudi Arabia is an increasingly active ally. It's doing the activism that we have long been asking of our allies for sharing our burdens. But it is reckless in its activism and its Wahhabi religious establishment does global harm, fostering the Islamist milieu in which terrorism finds its support space.

How bad are their crimes?

The Khashoggi murder has become a focus of media campaigning. We should beware of media campaigns that demand unanimity against the latest designated villain. Media campaigns of vilification were conducted during the Arab Spring against Egypt’s Hosni Mubarak and Tunisia’s Zine El-Abidine Ben Ali, who headed two of the most decent regimes in the region. Those few at home who instead warned of the Muslim Brotherhood were dismissed as Islamophobes. The consequences were horrific. Some of the same American actors are involved in the anti-Saudi campaign today.

The unanimous media line is that the Saudis must be “held to account.” Turkish president Recep Tayyip Erdogan faced no such demand, not even when he purged and jailed approximately one hundred thousand government officials, jailed five hundred journalists and had peaceful protesters beaten in Washington, D.C.

A selective indignation is at work, and a moral inversion. Erdogan, with his constant attacks on the West and its “hypocrisy,” speaks a language familiar to our intelligentsia; hitting him feels a bit like hitting itself. The Saudis, like American conservatives, speak a language of strong opposition to America's enemies; hitting them feels as good to our media as hitting Nixon, Reagan and Trump.

Which regime is actually worse? Turkey under Erdogan is an emerging totalitarian democracy in the Iranian Islamist mold; Saudi Arabia is an extreme, traditional absolute monarchy despite some moderating reforms—reforms that are endangered by the blowback from this crime, which weakens Crown Prince Mohammad bin Salman or “MBS.” Erdogan is conducting repressions on a mass scale. Saudi repressions are fewer but sustain a much worse entrenched societal oppressiveness.

The Saudis are worse in the inherited reality. Turkey is worse in trend, in the scale of current repressions and in its intentions toward us.

Neither regime is anywhere near as bad as Syria, Sudan or many other states. We need to keep our indignation better proportioned to reality.

And we need to relate our responses to the concrete situation. Weber taught that political morality must be a morality of consequences, not a morality of declared intentions. Realist and pragmatist theory alike teach that if a consequence of our action is readily foreseen, then that consequence is a part of our actual intention, even if we won't admit it to ourselves.

What are the concrete geopolitics of it?

Both Saudi Arabia and Turkey are extremely important relationships for us. Turkey is destroying the relationship by its own choices. The Saudis have been upgrading relations.

At the same time, Erdogan has been angling to cut a deal with the Saudis on the Khashoggi incident. He withholds the taped proofs he talks about, using them to try to blackmail the Saudis into concessions that would leave them more on his side, less on America's. Russia is also busy making deals with the Saudis and picking up influence at America's expense. The United States could be left holding the bag if it can't cut a deal of its own.

Erdogan and Putin have an easier time cutting deals with the Saudis than the United States. Both are classic strongmen dictators who love being power brokers. They make and break deals at their convenience, whether with each other or the European Union, the United States or their prostrate domestic opponents.

America has a harder time cutting deals. It will be especially hard for it in this case, now that the media and Congress have seized on the matter. Trump is not able to be the normal power broker that U.S. presidents used to be before 2001.

The alliance needs to be recalibrated. The Saudis need to renew the old practice of listening seriously to America about actions that they want to take and need American support for. In return, the United States would preserve the strategic and economic relationship from harm.

There will be a better chance for this if the Saudis take compensatory moral steps (e.g., more textbook reforms, fewer dissidents in jail, more women's rights, less war in Yemen).

We need the Saudis to stay active as allies, but active soberly. Enough of leaping before they look.

The Saudis broke away from deference to America when Barack Obama abused the deference of allies during the Arab Spring. The Saudis explained at the time that they would henceforth strike out on their own course: they saw the Obama administration telling Mubarak and others to yield in ways that proved suicidal; they concluded it would be better, for themselves and for America too, not to leave our shared interests to a United States that was undermining those interests. And in some cases, they did fill in for us in a period when the United States was often not on its own side.

Today we have a new president. Trump supports national interests. He has none of Obama's instinct of striking a morally superior pose against America and throwing our allies under the bus. It is time for Saudis to return to normal alliance procedures.

Is this the death of the “Arab NATO?”

No; it was never alive in the first place. But it could compel a rethinking of where to take the actual U.S.-Arab alliance. This alliance cannot become organic like NATO because it is built atop shifting diplomatic convergences. We can upgrade it, but only in keeping with its own specific logic. It can also be used as a supplementary vehicle for the improved consultation and coordination we need from the Saudis.

Where to go with Turkey?

Turkey should be kept on probation. Our exposure to it in intelligence sharing and troop basing should be reduced. NATO cannot expel it, but NATO can stop allowing it an informal veto on decisionmaking.

The economic sanctions are working. Turkey's economy is highly vulnerable from Erdogan's mismanagement. A few sanctions should be lifted as reward on Pastor Brunson, but most kept until all Western hostages are released—and until Turkey stops blackmailing the West with Syrian refugees.

The loss of Turkey as an ally has been in progress for fifteen years, on Erdogan's initiative. Toughness can work on specifics—Trump has shown this with Brunson. But as long as Erdogan remains, there will be no policy that is likely to reverse the trend.

Could we regain Turkey as an ally if Erdogan goes? Maybe. But for that, the United States will itself need to become once again a skillful player of its own in the Mideast—a country that favors friends over enemies consistently; that keeps its moral demands in balance with the weight of moral infractions; that's an honest broker in Palestine; and that puts enough skin in the game in places like Syria to be respected once again as a power broker.

We used to fulfill that role for decades as a matter of course. The three latest administrations have all thrown that away. Each came into office committed to a declinist view, saying America should pull back from its leadership role in the international system. Each ran into realities that undermined its campaign posture; but both George W. Bush and Barack Obama responded with other unsound approaches. Can Trump do better?