Dear NATO, It’s Time to Hit Pause on Your Summits 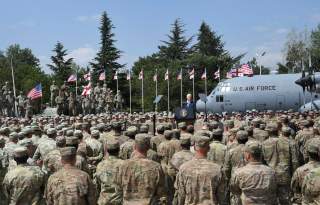 The apparent damage done to transatlantic solidarity during the recent North Atlantic Treaty Organization (NATO) summit—in conjunction with the meager results of that summit—raises serious questions about whether and why there needs to be another such meeting for the foreseeable future. Given the significant costs and the paltry benefits, the alliance ought to forego summit meetings while President Trump remains in office. Instead, it ought to rely on ministerial-level meetings where most of the serious agreements are hammered out in any case.

As most NATO observers can attest, the NATO Brussels Summit was a disaster concerning public relations, diplomacy, and strategic deterrence. The summit began with President Trump excoriating Germany not merely for its low defense spending but also for its plans to construct a second gas pipeline from Russia, known as Nord Stream 2. Furthermore, Trump called Germany—the country that has led European Union efforts to sanction Moscow over its actions in Ukraine—a “captive of Russia.”

Additionally, at the beginning of the summit’s second day, Trump arrived late, then essentially hijacked a session with leaders from Ukraine and Georgia to again harp on inadequate European defense spending. After what many interpreted to be a threat to leave the alliance—the second time Trump or a senior White House official in his administration has done do—NATO Secretary General Jens Stoltenberg convened an emergency, allies-only meeting, during which defense spending was discussed further.

During a hastily arranged news conference immediately after, the President asserted alliance members had agreed to increase defense spending even beyond the 2 percent goal—a claim soon denied by other heads of state. Perhaps sensing he had succeeded in upending the summit and wanting to end on a more positive note, the President eventually conceded, “I believe in NATO. I think NATO’s a very important—probably the greatest ever done.”

Despite Trump’s efforts to patch things up at the eleventh hour, the damage was already done, particularly at the strategic level. The President has consistently used multilateral summit meetings to question the value of NATO and sow doubt regarding America’s commitment to Article 5 and collective defense. He apparently believes this amounts to shrewd negotiating tactics, although there’s virtually no evidence to show that this method works.

Instead, what he’s doing at NATO summit meetings is essentially undermining deterrence vis-à-vis Russia. Deterrence rests in the mind of the adversary—if the adversary believes they’ll be punished for an attack, then deterrence works. If the adversary has doubts about prospective punishment, then deterrence may fail, and the odds of armed conflict increase. Trump’s words and deeds at alliance meetings held on July 11-12, 2018 and in May 2017—as well as at the recent G7 meeting of Western leaders—clearly raised grave questions about his commitment to NATO. In the President's mind, this may only amount to tactical posturing, but it has the consequence of demolishing deterrence and emboldening Russia.

The alliance can avoid this by temporarily ending summits of national leaders. It's obvious what would be gained, or at least maintained—that is, the deterrence of Russia. But would anything be lost by putting summits on hold? Judging from the two summit meetings Trump has participated in so far, not much. The short May 2017 summit was remarkably light on substance and generated virtually no ‘deliverables' or significant agreements.

The 2018 Brussels summit ostensibly resulted in agreements on increased readiness, command structure changes, a training mission in Iraq, and a new cyber operations center. However, each was the result of weeks and months of deliberation and preparation, as well as approval at the ministerial level—NATO’s members merely gave their stamp of approval.

Admittedly, the endorsement of such agreements is often essential—in some countries, a prime minister's or president's approval is necessary to resolve ministerial disputes or spur bureaucracies into action. However, it's now an open question whether these limited benefits are worth the strategic instability that results from summit meetings in the Trump era.

Instead, the alliance ought to at least temporarily rely on meetings of defense and foreign ministers to negotiate and promulgate its agreements and initiatives. Such meetings occur more frequently—usually two or three times per year—and they're where much of the real work on resolving differences among allies really happens. Moreover, it seems clear that Secretary of State Pompeo and Secretary of Defense Mattis view NATO very differently than their boss, and they have not played a similarly disrupting, damaging role when it comes to assurance and deterrence.

Unfortunately, NATO may be reluctant to nix a meeting of national leaders next year, when the alliance will celebrate its seventieth birthday. To ensure NATO is around for its seventy-first though, its members ought to carefully consider whether it can withstand performances similar to what they've seen at recent summits.

Dr. John R. Deni is a research professor at the U.S. Army War College and the author of NATO and Article 5. The views expressed are his own.