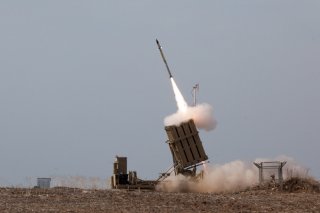 Tel Aviv and Jerusalem are under Hamas rocket fire, people are hesitant to go to work, send kids to summer camps, go to the beach. Much of Israel has been largely shut down, most of the population is now within range. Insanity. The last time this happened, in November 2012, I was caught in a train in Tel Aviv. The train stopped and we were instructed to lie on the floor, awaiting the “all clear” signal. There was an eerie calm, some people laughing helplessly at the insanity of it all. This time I was in a sushi restaurant, returning home just as the alert sounded.

No country can allow its citizens to be repeatedly attacked by terrorists on its border. It is as if Juarez or Toronto were continually firing on most of the United States. No one would stand for it and there would be overwhelming public pressure on the U.S. government to respond with devastating force.

Some will immediately invoke the occupation, settlements, the Netanyahu government’s hardline positions, all partly true, but a separate matter. Terrorism, the indiscriminate targeting of civilians, is indefensible no matter what the reason. Furthermore, Hamas, which denies Israel’s right to exist and calls for its destruction, tries to have it both ways, targeting Israeli civilians, while intentionally embedding rockets and other military forces among its own civilian population. In so doing, it seeks both to make it harder for Israel to respond effectively and then to claim a PR victory when some civilians are killed in Israeli responses, despite the extreme measures Israel takes to avoid this.

The Netanyahu government sought to avoid an escalation and especially the need for a significant ground operation. Under the combined pressures of the massive rocket fire, however, along with public demands for an effective response, this may prove to have been an illusory hope.

Israel’s options are limited. Given the failure of the recent negotiations, there is no short-term diplomatic option. Israel cannot tolerate the current situation, but past experience demonstrates that even a major military operation will at most buy a temporary respite before the next round. Were Israel to stage a major ground operation and topple Hamas, the question would then be who would take over once it withdrew; unfortunately the only other actors in Gaza today are even more extreme. Israel could, of course, reoccupy Gaza, but no one even wants to contemplate that option, although a temporary reoccupation would make sense if Israel could then hand it over to the Palestinian Authority in the West Bank. The latter, however, does not have the power to enforce its rule, would not cooperate even if this may actually be the only means of achieving Palestinian reunification, and Israel is unwilling to pay the price in bloodshed.

In the absence of a fully effective military response, the most we can hope for is conflict management, not resolution, and Israel’s objectives in the current operation can be no more than restoring the relative calm that prevailed since the last round. Like its predecessors, this one will probably come to a temporary end after mediation by some third party, possibly Egypt.

Only a two-state solution holds out hope for long-term stability. On three occasions, at Camp David in 2000, the “Clinton Parameters” later that year, and in 2008, Israel made historic proposals for peace in which it agreed to withdraw from nearly 100 percent of the West Bank, move some 80 percent of the settlers and divide Jerusalem. The only area in which it was unwilling to make dramatic proposals was on the Palestinian demand for an unlimited return of refugees. In the recent negotiations, Netanyahu was reportedly willing to withdraw from some 90 percent of the West Bank, though he was apparently less forthcoming in other areas. Tragically, the Palestinians still adhering to their nearly century-long all-or-nothing approach, rejected these far-reaching proposals and insisted on a complete “right of return”—a totally unrealistic demand.

Thus, peace does not appear to be in the offing. The Obama administration, which has squandered both its own diplomatic capital and whatever residual goodwill still exists among Israelis and Palestinians, in two ill-conceived and abortive attempts to promote negotiations, would be well advised to await the emergence of truly propitious circumstances before trying again. A further failed attempt, despite the obvious temptation to try, is the last thing Israelis and Palestinians need.

In the meantime, back to rocket insanity.