The Death of Democracy in Bangladesh 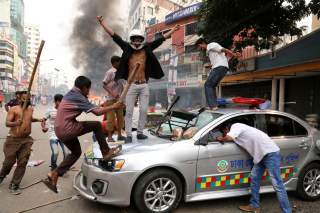 It’s not often that armed motorcyclists attack a U.S. ambassador, but that’s exactly what happened to Marcia Bernicat, Washington’s envoy in Bangladesh, one night this past summer.

Bernicat was leaving a dinner party in Dhaka on August 4 when men on motorbikes chased her vehicle and threw bricks. No perpetrators were named in the assault, which left her unharmed.

The incident showcased the violent and increasingly fraught politics of Bangladesh that could soon transform the country—regarded in fairly recent years as a fragile but nonetheless democratic and moderate Muslim-majority nation—into a one-party state. And it highlighted how Washington, which accords relatively little policy attention to Bangladesh, is now getting caught up in the vortex of the country’s toxic politics. U.S. officials ignore Bangladesh at their peril.

Several days before the attack on Bernicat, protests had broken out across Dhaka after a bus accident on July 29 killed two young pedestrians. Protestors, many of them students, demanded the government improve road safety. The rallies were largely peaceful, but the authorities cracked down hard. In one Dhaka neighborhood, thugs identified by local media reports as members of the Bangladesh Chhatra League, the student wing of the ruling Awami League party, assaulted protestors. Reporters covering the protests were beaten, and some had their cameras snatched. Law enforcement officials patrolled universities to prevent protests from spilling onto campuses.

After giving a scathing interview to al-Jazeera about the government’s handling of the protests, the prominent social activist Shahidul Alam was picked up by police and, according to media reports, tortured in custody. After a brief visit to a hospital, Alam—still in need of medical care—was thrown in jail. His repeated petitions for bail were denied until a high court on November 15 finally ordered him to be released—more than three months after his arrest. Bangladesh’s attorney general, however, has vowed to challenge the court order in the Supreme Court.

These heavy-handed state responses to critics have become sadly routine in Bangladesh. In many cases, Dhaka uses legal pretexts as justification. Last month, Parliament passed a new law, known as the Digital Security Act, that regulates online content and social media. Among other things, it bans vaguely worded “aggressive or frightening” content. Meanwhile, journalists who publish articles that Dhaka doesn’t like have been charged with defamation and sedition.

The government is also cracking down hard against those on the inside, and in the highest of places. Last November, the Supreme Court rejected a constitutional amendment that would have enabled the government to more easily dismiss judges. The government reacted in anger to the court’s decision, and threatened to harm Chief Justice Surendra Kumar Sinha if he didn’t flee the country. Later, the government claimed that Sinha, who had since resigned and went into exile in the United States, would be charged with corruption. Bangladesh’s accountability bureau, however, admits there is no evidence to back up such charges. Sinha is now seeking asylum in America.

By any measure, the current state of democracy in Bangladesh is grim. Bangladesh ranks 144th out of 180 countries in Reporters without Borders’ press freedom index ranking. Between 2014 and 2017, it fell from 85th to 92nd out of 167 countries in the Economic Intelligence Unit’s Democracy Index. One of the harshest assessments comes from a March 2018 Bertellsmann Stiftung report, which classifies Bangladesh as an autocracy because it “no longer meets minimum standards for democracy,” such as fair elections.

Bangladesh is looking less and less democratic by the day. This slide into authoritarianism, which certainly would not be new for a nation that has experienced fifteen years of military rule over its forty-seven-year-old history, has been long in the making.

Back in 2014, the Awami League was reelected in a poll that many outside observers deemed to be far from credible; the EU even declined to send election observers. The main opposition party, the Bangladesh Nationalist Party, boycotted the election in protest of the government’s decision to scrap a law that requires Parliament to be dissolved in advance of elections and replaced by a neutral caretaker administration that oversees the poll. With the Bangladesh Nationalist Party boycott, 153 out of 300 seats were elected unopposed—essentially doing away with competitive races in more than half of the country’s parliamentary contests.

Over the last four years, Dhaka hasn’t sought to build bridges with the opposition; instead, it has crushed it. Scores of opposition members from the Bangladesh Nationalist Party and Jamaat Islami have been arrested and imprisoned. Dhaka has used a counterterrorism pretext to justify this crackdown. In the government’s defense, Jamaat Islami does have violent wings, and researchers have identified links between the group and Jamaat-ul-Mujahideen Bangladesh, an Islamist terrorist organization that claimed a series of attacks in recent years. Still, while the opposition does resort to political violence—ranging from the vandalization of property at the Bangladesh High Commission in London to the staging of violent anti-government protests after the 2014 election—they have no formal ties to terror.

Dhaka’s draconian deeds have further poisoned a deeply polarized political environment rooted in a longstanding feud between Prime Minister Sheikh Hasina and the Bangladesh Nationalist Party’s Khaleda Zia, who heads the political opposition. Neither the Awami League nor the Bangladesh Nationalist Party is in a mood for compromise. In an environment flush with intransigence and iron fists, there is no room for conciliation and olive branches.

The next few months are critical. Bangladesh’s next national election is scheduled to take place by January. A relatively free and fair election would go a long way toward arresting the country’s slide toward authoritarianism and restoring faith in democratic institutions. Another flawed poll—one where the opposition isn’t given a fair shot—could cement Bangladesh’s status as a one-party state.

So far, the trendlines aren’t good.

Back in February, opposition leader Zia was arrested and jailed on corruption charges. The Bangladesh Nationalist Party denounced the move as an effort to undercut the party’s electoral prospects. While party officials publicly claim they plan to contest the election, they could well boycott the election in protest if she isn’t released. Other party leaders labor under heavy legal pressure. They have been sued for various offenses, including instigating subversive acts while staging rallies. Mirza Fakhrul Islam Alamgir, a top Bangladesh Nationalist Party leader, claimed in a press conference in early October that the party had been served with more than 4,100 lawsuits over barely thirty days.

While Prime Minister Hasina has unsurprisingly offered assurances that everything is on track for a successful election, her government hasn’t always telegraphed confidence. Bangladesh’s chief election commissioner recently said that he could not ensure irregularity-free polls. Indeed, several local elections this year have been marred by concerns about irregularities, including allegations of voter intimidation and ballot boxes being stuffed before polling hours.

Why Washington Can’t Look Away

For U.S. policymakers in Washington, this may all appear to be just another case of a country falling prey to anti-democratic forces—a sign of the times when strongmen leaders and authoritarian tendencies are on the ascent around the world, including in the United States.

However, the troubling developments in Bangladesh aren’t happening in a vacuum. As the assault on Ambassador Bernicat makes clear, the United States is getting dragged into the maelstrom of Bangladeshi politics. And yet, this shouldn’t come as a complete surprise to Washington.

Indeed, before the attack, comments by the U.S. Embassy had stirred tensions with Dhaka. In previous weeks, Bernicat had publicly criticized the government. In June, in a speech at the National Press Club in Dhaka, she expressed concern over reports of intimidation of opposition politicians contesting local elections. In response, Sajeeb Wazed Joy, the son of Prime Minister Hasina, posted a Facebook message in early July accusing Bernicat of being a “mouthpiece” of the Bangladesh Nationalist Party.

Instead of condemning the attack on the U.S. envoy’s vehicle, Dhaka lambasted the U.S. Embassy. On the day after the attack, Information Minister Hasanul Haq Inu accused America of “poking its nose” in Bangladesh’s domestic affairs. On August 10, Law Minister Anisul Haq went so far as to accuse Ambassador Bernicat of plotting to topple the government. For its part, on the day after the attack, the embassy published a statement on Facebook that expressed its support for the right of peaceful protest, and criticized the state’s violent crackdown on the young people rallying against Bangladesh’s poor road safety. In more recent weeks, the Embassy has continued to express public concern about Dhaka’s policies; late last month, Bernicat—whose term as ambassador is coming to a close—warned that the Digital Security Act could be used to suppress and criminalize free speech.

Bangladesh’s polarized politics are now spilling directly into Washington. For several days in September, the Bangladesh Nationalist Party’s Alamgir made the rounds in the U.S. capitol, and while he was pleading his party’s case to interlocutors around town, a public relations firm—presumably representing Dhaka—sent out email messages to Bangladesh watchers. These messages highlighted various achievements of Bangladesh’s government, from the expansion of a free press to the strong public support enjoyed by the government. One of these messages justified the arrest of Alam, the social activist jailed for criticizing the government, and claimed he had spoken “dangerously and falsely.”