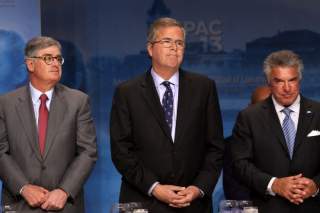 Is the Bush dynasty poised to add Jeb to the list of U.S. presidents? Not if the former Florida Governor can’t win over white working-class voters, argued two panelists at a luncheon hosted by the Center for The National Interest on Wednesday. The event, which focused on The National Interest’s current cover story “The Bush Restoration,” featured the article’s author Sam Tanenhaus, a contributing columnist to Bloomberg View, and Henry Olsen, a Senior Fellow at the Ethics and Public Policy Center. TNI’s editor Jacob Heilbrunn moderated.

Tanenhaus argued that the Bush family has long had an uncanny feel--like a “carpenter’s level”--for finding the right set of policies that can unite the GOP. He also detected a resurgence of the importance of Midwestern Republicans, which he felt was a good thing for the GOP.  Olsen also highlighted the significance of the Midwest but was skeptical that Jeb Bush would fare well as either a primary or general election candidate. He noted that Jeb seemed to be counting on his ability to win over more Hispanic voters than Mitt Romney could in 2012 in order to win the presidency in 2016.

However, Olsen argued that this would not be enough to propel Bush to victory. As he noted, Hispanic voters are highly concentrated within a few states. Many of these states, such as New York and California, vote solidly for Democrats. In 2012, over two-thirds of eligible Hispanic voters lived in what were considered non-battleground states. It is unlikely that  Hispanic voters can swing many states in Bush’s favor.

In this sense, Romney’s loss in 2012 did not stem from his inability to appeal to Hispanic votes, according to Olsen. Rather, Romney lost the election because he failed to appeal to blue-collar working class white voters in the Midwest. Indeed, Olsen noted that according to exit polls conducted in 2012, Obama beat Romney in only one of the four qualities voters desired in a president: the question of whether the candidate “cares about people like me.” On this front, Romney lost to Obama by a whopping margin, with only 18 percent of voters believing this of Romney, compared to 81 percent for Obama.

Tanenhaus agreed that Jeb Bush would have to win over white blue collar workers from the Midwest, noting that the region of 62 million individuals was already dealing with the pressure put on pensions and unions by Republican governors, who account for ten out of twelve of the governorships in Midwestern states.

Tanenhaus was somewhat more optimistic about Bush’s chances of winning over these voters, noting his brother’s “compassionate conservatism” agenda had enabled him to win the White House on two occasions. As Tanenhaus noted of Jeb in his TNI article, “Like his father and brother, he has combined various strands of conservatism and emphasized different ones at different times.”

Yet, despite Jeb Bush’s many advantages, both Tanenhaus and Olsen agreed that Wisconsin Governor Scott Walker and Florida Senator Marco Rubio were better positioned to defeat Democratic Party nominee Hillary Clinton because of their ability to perform well in the Midwest. This will be no easy task, as Clinton performed well with white working-class voters when running against Barack Obama in 2008. And, if Jeb is unable to win over these voters, he’ll be “finished” in a general election against Clinton.