Defeating the Islamic State of Idlib 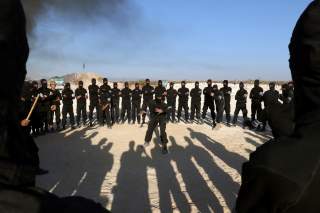 President Donald Trump demanded in a June 2 tweet that Russia, Syria, and to a lesser extent, Iran, stop “bombing the hell out of Idlib Province in Syria, and indiscriminately killing many innocent civilians.” He added: “The World is watching this butchery. What is the purpose, what will it get you? STOP!” Idlib is the last bastion of the hardened Salafi-jihadi-led opposition to the Syrian regime. It is the same province that, in 2017, Brett McGurk, then the U.S. envoy to the coalition against the Islamic State, called “the largest Al Qaeda safe haven since 9/11.” The president is right in showing concern for the innocent Syrian casualties of the horrific Russian and Syrian bombing campaign. Still, the president has not yet addressed the hornet’s nest of terrorism following his declared victory over the Islamic State. Clearly, Washington and its allies are at a loss as to how to prevent a humanitarian tragedy should the Syrian regime, backed by Russia, fight its way into Idlib. The Trump administration should not be complacent in allowing Idlib to remain a safe haven for hardened terrorists, who have created there an Islamic state in all but name.

The Idlib province in northwestern Syria along with adjoining swath of territories in northern Hama and western Aleppo, is the stronghold of Al Qaeda offshoot Hay’at Tahrir al-Sham (HTS). Alternatively, Idlib is emblematic of the failed Syrian uprising that aspired for freedom from a tyrannical regime but devolved into the murderous realm of Salafi-jihadism. Idlib province was among the first areas to oppose the regime and fight against it. Gradually, Islamist and Salafi-jihadi parties took control of the province and surrounding areas. The United States led an international coalition to defeat the Islamic State in Iraq and Syria, in parallel with Russia’s support of the Syrian regime’s offensive against its opposition; and slowly but surely Idlib emerged as the opposition’s last stronghold.

This largest Al Qaeda safe haven, to borrow McGurk’s appellation of Idlib, was not only the making of Salafi-jihadis. The dynamics among and between the Islamic State and its competitors among jihadi organizations, the regime’s policy of quarantining the opposition in Idlib, and Washington’s singular focus on the Islamic State all served to make Idlib the Qandahar of Syria.

In 2014, the regime began implementing a policy of transferring citizens deemed distrustful to northern Syria. This ad hoc policy eventually became the standard quo as the offensive gained momentum. Distrustful and “undesired” citizens—as well as internally displaced citizens—were transferred to Idlib. In some cases, the regime also allowed or forced safe passage of rebels to Idlib. The province, despite an outflow of its residents to safe destinations, has currently an approximate population of three million, nearly half of them displaced from previously opposition-held areas.

Meanwhile, the Syrian Al Qaeda affiliate Jabhat al-Nusra, led by Abu Mohammed al-Golani, severed its ties with the Islamic State as it expanded its territory into Syria. In fact, Abu Bakr al-Baghdadi, leader of the Islamic State, seemed to focus more on defeating rebel groups in Syria and taking over their territories than on fighting the Syrian regime. Reeling from losses to the Islamic State, al-Nusra, along other Salafi-jihadi groups, moved to Idlib to regroup. What followed was a contest for power in Idlib in which most of the local opposition was marginalized.

At the same time, Jabhat al-Nusra maintained its ties to Al Qaeda while the latter publicized its split with the Islamic State. In late July 2016, al-Golani, apparently in an act meant for international public consumption, severed his relationship with Al Qaeda and announced the dissolution of Jabhat al-Nusra and the establishment of a new organization, known as Jabhat Fatah al-Sham. Clearly, al-Golani sought to underscore the Syrian credentials of his organization, as separate from Al Qaeda, to the international community—especially the United States. Before long, in late January 2017, as the Islamic State faced defeat, Jabhat Fateh al-Sham sought to dominate the opposition in northern Syria. It rebranded itself Hay’at Tahrir al-Sham (HTS) when it merged with several other jihadi groups in Idlib (Harakat Nour al-Din al-Zinki, Liwa al-Haq, Jaysh al-Sunna, and Jabhat Ansar al-Din).

Concurrently, in the summer of 2017, following a pitched battle between the Lebanese army and Hezbollah against HTS in the Lebanese village of Arsal and its hinterland on the border with Syria, Hezbollah and HTS agreed to a ceasefire brokered by Maj. Gen. Abbas Ibrahim, the head of Lebanon’s Directorate of General Security. In subsequent negotiations, Hezbollah agreed that 7,777 people, including 1,116 HTS jihadis and 6,101 civilian refugees, would be given safe passage from Arsal to the rebel-held Idlib. Similarly, following the fall of Raqqa in late October 2017, the Islamic State’s de facto capital in Syria, reports surfaced that London, Washington and its Kurdish allies (Syrian Democratic Forces) had granted safe passage out of Raqqa to a convoy carrying 250 IS jihadis, 3,500 family members, and lorry loads of arms and possessions. The convoy reportedly included fifty trucks, thirteen buses, and over one hundred vehicles. Some of those vehicles were loaded with heavy arms and ammunition, despite the fact that the agreement allowed the jihadis to take only their personal weapons. As it turned out, these jihadis and others have dispersed in eastern and northern Syria, including especially in Idlib and surrounding areas.

As a result, Idlib today has the largest concentration of hardened and most unyielding Salafi-jihadis. Estimates of their number vary with the median ranges between sixty thousand and ninety thousand. The leader of the Salafi-jihadi groups is none other than HTS, the last iteration of Al Qaeda’s Syrian branch. HTS defeated most of its rivals, even some of its one-time allies, especially Ahrar al-Sham and Jaysh al-Islam, both supported by Turkey. Although it suffered some losses in men and territories in early 2018, HTS has managed to regroup and re-emerge in early 2019 as the leading Salafi-jihadi organization in Idlib and surrounding areas. It commands thousands of members and reportedly an equivalent number of affiliates and supporters.

Other principal Salafi-jihadi organizations operating in Idlib include the National Liberation Front, Hurras al-Din, and the Turkistan Islamic Party. The Turkish-backed National Liberation Front, established in early 2018, as an umbrella organization of what Ankara considers “moderate” rebels not affiliated with Al Qaeda, including the once formidable Ahrar al-Sham, Suqour al-Sham, members of Nour al-Din al-Zinki, members of the Free Syrian army, and Faylaq al-Sham. Hurras al-Din is an Al Qaeda affiliate jihadi organization established by Al Qaeda loyalists who split from Jabhat al-Nusra during its metamorphosis into HTS. It has about one thousand members and supervises a strong media organization. Finally, the Turkistan Islamic Party (TIP) in Syria is a group of Uighur Chinese militants active in western Idlib. TIP is the Syrian wing of the transnational East Turkistan Islamic Movement. It commands several thouand members; its goal is to establish an Islamist state in China’s western Xinjiang province, or “East Turkistan.” TIP and its parent organization have cooperated with the transnational Islamic movements of Central Asia and the Caucases, whose members have constituted a mainstay of the Islamic State.

The Syrian regime has long wanted to conquer Idlib. But until recently its strategic desire to conquer the last oppositional holdout had been checked by Russia. Initially, as the civil war raged on, Russia, Iran and Turkey reached an agreement, negotiated in Astana in May 2017, over the creation of four “de-escalation” zones, including one covering Idilb and surrounding areas. The agreement stipulated the cessation of hostilities along with providing better terms for humanitarian access. Nevertheless, it committed the three parties to combat HTS and other Salafi-jihadi organizations. They were also supposed to decide whether their opponents were terrorist groups or just the average, armed opposition.

Evidently, it was under the pretext of combating terrorist groups that the Syrian regime, supported by Russia, seized all the de-escalation zones with the exception of Idlib. Apparently, Turkey had early on planned to dislodge HTS from Idlib and entrust its allies there with the task of controlling the province. In September 2017, Turkey mobilized forces along the border of Idlib to establish observation points along its perimeter. Sensing the danger, HTS avoided a clash with Turkey by allowing its forces to enter Idlib and establish observation points. Meanwhile, the regime and Russia established their own observation points in Syrian regime territory adjacent to the de-escalation zone.

Before long, Russian officials began airing their anger at the “terrorists” in Idlib over their drone attacks on Russia’s strategic Hmeimim airbase in the Latakia province, and for firing on their observations posts. In late August 2018, Russia escalated its rhetoric and military build-up, which indicated that an attack on Idlib was imminent. Russian foreign minister Sergei Lavrov said terrorists must be wiped out in Idlib, accusing them of using civilians as human shields. Fearing a human catastrophe and another exodus of Syrians to Turkey, Turkish president Recep Tayyip Erdogan met Russian president Vladimir Putin in the Black Sea resort of Sochi on September 17, 2018, to iron out an agreement. The Sochi memorandum of understanding reinforced the Idlib de-escalation agreement by creating a demilitarized zone between 15 kilometers and 20 kilometers wide inside the Idlib de-escalation area. The DMZ would be cleared from “radical terrorist groups” and heavy weapons by mid-October, and stipulated Turkish and Russian monitoring patrols along the perimeter of the DMZ.