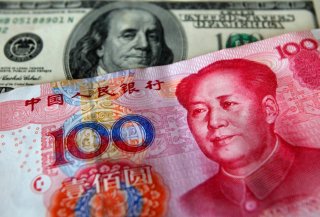 As France and Germany tangled in Russia in the years immediately before World War I, Great Britain devised plans for a financial weapon that could cripple an adversary at the outbreak of conflict.

France and Germany attempted to use financial entanglement for strategic purposes in peacetime, only to see these plans backfire in wartime; at the same time, Great Britain attempted to aggregate every financial and economic tool in its arsenal for one splendid strike.

London, like Paris and Berlin, knew that World War I, the culmination of a century-long great power rivalry, would engage troops on the frontlines as well as high finance across the world’s biggest capital markets. Great Britain was the world’s financial capital and keeper of the world’s largest navy, maintained to protect the world’s largest merchant fleet.

In the ten years before World War I, officers within the admiralty’s Naval Intelligence Department planned to wage “economic warfare on an unprecedented scale” against Germany, Great Britain’s upstart challenger. The objective was to smother the German economy the moment war arrived. The plans included efforts to halt all British transactions and stop all trade with Germany in hopes of paralyzing Berlin and forcing rapid capitulation, as Nicholas Lambert explains in Planning Armageddon.

These officers believed that the peacetime characteristics of the British-German financial rivalry, such as cross-border trade and asset transactions, could be weaponized at the outbreak of war.

But when war arrived in August 1914, the strategy flopped. The British War Office, Foreign Office, and Board of Trade opposed the strategy’s main efforts. The British homeland was far from immune from potential consequences of financial weapons; any sanctions regime would tank Britain’s economy too.

The admiralty had devised detailed plans for financial Armageddon. British officials pulled back. Focus shifted to the western front, and the trenches of the shooting war.

For the first time in the People’s Republic of China’s history, Beijing’s capabilities likely match its long-standing intentions to “reunify” Taiwan. Xi Jinping has revealed a lower tolerance for the ambiguous cross-strait status quo; He sees Taiwan as a “hidden danger” that threatens “national rejuvenation” and has, more than any Chinese leader since 1949, shown a willingness to stake the legitimacy of the Chinese Communist Party on the Taiwan question.

However, American planners who rely on financial weapons must reckon with Britain’s failure to execute its “planned Armageddon.” Despite efforts to craft the perfect economic weapon, British officials deemed the risk of backfire too great.

The consequences of a program of sanctions like those proposed by Blackwill and Zelikow are immense. China holds $1.1 trillion of U.S. sovereign debt while U.S. investors hold $1.1 trillion in Chinese stocks and bonds. Larry Summers has called this scale of interdependence a “balance of financial terror”—in other words, deterrence by mutual dependence.

Should Beijing precipitate a Fourth Taiwan Strait Crisis, the fear of financial Armageddon could leave a U.S. president with two options: do nothing or initiate military moves in the hopes that such a conflict could stay limited.

Counterintuitively, the immense scale of American and Chinese interdependence increases the odds that a confrontation ends in a shooting war.

In the frantic fog of a Taiwan contingency, an American president may deem the military option the path of least resistance. It is certainly the best-rehearsed option, war-gamed by the president’s richest department. It has also been the choice of history; the United States turned to its military to resolve the first three crises in the Taiwan Strait. Strategy is frequently the product of historical analogy, so the military option may be seen as the default plan for the Fourth Taiwan Strait Crisis too.

The goal of American strategists, intent on Taiwan’s survival, must be to delicately unwind some of the most intricate features of capital interdependence, vital for diffusing a financial “doomsday machine.” By decreasing the scale of interdependence and reducing the risk of backfire, American policymakers can restore the feasibility of financial weapons as a usable tool, preventing an invasion of Taiwan from ever taking place.

[This is part two of a two-part series on the perils of capital dependence in great power rivalry. Part one was published earlier.]