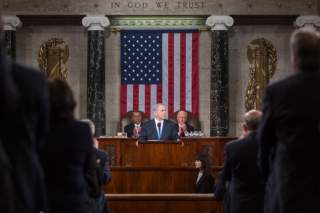 Israeli Prime Minister Benjamin Netanyahu has many admirers in the United States–at least if judged by the twenty six standing ovations he received from members of the Senate and the House of Representatives during a speech to a joint meeting of Congress last Tuesday.

Conversely, many other Americans were infuriated by his frontal attack on a serving president and on a central pillar of Barack Obama’s foreign policy. These reactions were only exacerbated by Netanyahu’s decision to deliver his message on the president’s home turf. Both viewpoints were reinforced by Netanyahu’s performance in which his meticulously written speech was perfectly delivered. His admirers were invigorated while his detractors emerged even more annoyed by his misdeeds. Both schools, however, have something in common: their emotions seemed to prevent them from carefully considering the content of Netanyahu’s speech.

Now that a few days have passed and the immediate, reflexive and entirely predictable reactions to the speech are behind us, a more balanced and dispassionate analysis may be possible. Such an analysis should focus on two questions: First, what was the thrust of Netanyahu’s argument and was there anything new and reasonable in his speech that deserves sober consideration? Second, were Netanyahu’s objectives worth the risks and costs entailed in his bold move to inject himself into the heart of a U.S. internal debate regarding an agreement that has yet to be concluded?

A careful reading of Netanyahu’s speech makes one thing clear: Israel’s Prime Minister did not travel to Washington to prevent any deal with Iran. Indeed, it is Netanyahu who seemed to be fighting the false dichotomy between a “bad deal” and “no deal” by making it clear that he would support another possibility: a better deal. Moreover he seemed to accept the point made a day earlier by U.S. National Security Adviser Susan Rice, who described the demand for no enrichment by Iran as unrealistic. Not once in his speech did Netanyahu repeat his earlier demand for a “red line” of zero enrichment. Instead, he posited the more limited objective of rolling back Iran’s enrichment capacity “well-beyond the current proposal.” And, he reinforced his new, more pragmatic approach by raising the possibility of a deal with Iran that Israel would not like but could live with.

Nor was the approach that Netanyahu presented to dealing with the duration of the final agreement unreasonable. This issue became much more sensitive because of a very important concession that the P-5+1 made in the interim accord reached with Iran in November 2013, the Joint Plan of Action. The accord granted that after the expiration of a final deal, Iran would be treated as any non-nuclear weapons member state of the 1968 Nuclear Nonproliferation Treaty (NPT). Or, put more bluntly, after the final agreement expires, Iran will be treated as if it were Japan.

Not surprisingly, since Iran remains committed to Israel’s destruction, and since it continues to support movements like Hamas and Hezbollah that strive actively to fulfill this goal, it is difficult for Netanyahu–or for any other Israeli–to accept that Iran would one day be treated as if it were Japan. But again, Netanyahu shied away from reiterating an “all or nothing” approach. Instead, he seemed to be making two points. First, a decade–the period of time mentioned by Susan Rice as the acceptable duration for the agreement–is too short. That is not a dogmatic position–it was meant to press the Obama administration to hold the line for a longer duration than it now seems to accept.

However, it is Netanyahu’s second point about this issue that is more important: namely, that if America hopes that the implemented nuclear agreement would encourage Iran to return to the so-called “community of nations,” the hypothesis should be tested. Thus, if it turns out that the hypothesis was correct and Iran abandons its support of terrorism and its commitment to Israel’s destruction, the agreement would expire and Iran would be treated as a normal state. But if it turns out that Iran has not changed course–thus refuting the driving hypothesis–the arrangements agreed upon in the final deal will remain in effect. Or, in Netanyahu’s words: “if the world powers are not prepared to insist that Iran change its behavior before a deal is signed, at the very least they should insist that Iran change its behavior before a deal expires. If Iran changes its behavior, the restrictions [on its nuclear program] would be lifted. If Iran doesn't change its behavior, the restrictions should not be lifted.”

Here again, Netanyahu avoided making the unreasonable demand that the arrangements incorporated in the final agreement would be applied indefinitely. Instead, he suggested making the expiration of such arrangements contingent on Iran eventually ending its commitment to supporting efforts to destroy a sovereign member state of the United Nations. Thus, on this issue as well, Israel’s prime minister did not suggest rejecting any deal with Iran; instead he seemed to be pushing for a better deal.

But this goes to the heart of the disagreements poisoning relations between Netanyahu and Obama over the past six years. Beyond the lack of chemistry between the two men, Netanyahu concluded–rightly or wrongly–that Obama just doesn’t “get” the Middle East. In Netanyahu’s view, Obama’s unrealistic expectations for the so-called Arab Spring resulted from his naïve tendency to let his views of the region through the prism of Jeffersonian democracy. In his opinion, only a leader blinded by wishful thinking could not have seen that Islamists were best positioned to take advantage of the Arab Awakening and that the Muslim Brotherhood was not moderate and pragmatic. Confident that his assessments were confirmed by developments in Egypt and reconfirmed by the quick rise of jihadists in Syria, Iraq, Libya and Yemen, Netanyahu similarly regards the current U.S. nuclear negotiations team as too quick to concede or abandon positions under the impression that Iran would never accept these demands and would instead walk away from the negotiations table.

Seen in this context, Netanyahu’s excursion to Washington may not have been intended to prevent the United States from reaching an agreement with Iran, but rather to force the Obama administration’s hand in pursuit of a better agreement. Israel wants Iran to be permitted less enrichment capability than what Obama seems willing to accept, but not zero enrichment. Israel is prepared to accept an agreement that will not last forever, with a longer duration than the 10-year period that the Obama administration seems to have accepted, contingent on the broader context of Iran’s regional behavior.

While neither Netanyahu’s goal–to push for a much better agreement–nor the positions he took in his speech to the joint meeting of Congress are unreasonable, the manner in which he chose to pursue these objectives ranged from self-defeating to utterly irresponsible. By insisting on delivering the speech two weeks before the March 17 Israeli elections rather than in their immediate aftermath, Netanyahu undermined the credibility of his effort by raising the suspicion–first in Israel and then in Washington–that it was all designed to impress the Israeli voter, not the U.S. Congress.

Second, by insisting on delivering the speech at this unfortunate time, Netanyahu invited a debate focusing on his conduct rather than on the ascribed pitfalls of the deal with Iran. By doing so, he made it more difficult for people to consider the merits of his arguments.

More importantly, Netanyahu violated the “first principles” that have guided Israel’s strategy for decades. By conspiring to arrange the speech with the Republican leadership in Congress, Netanyahu deviated from Israel’s insistence that support for it should never become a partisan issue.

Moreover, Israel’s prime minister has broadened and deepened the conflict with the United States. Personal animosity between Netanyahu and President Obama and their respective staffs was confined for six years but has now widened to engulf the Democratic Party. Democrats are being forced to choose between Israel and their president. This point was illustrated by House Minority Leader Nancy Pelosi, who characterized Netanyahu’s speech as “insulting.”

Since politics are a human endeavor, such insults rarely pass without consequence. Israel needs the United States and relies upon it every day and on many fronts, some overt, many highly classified. Was the risk that Netanyahu took in insulting President Obama calculated and reasonable?

Finally, by urging the United States to tie the duration of the final nuclear agreement with Iran to its policies in other realms, Netanyahu deviated from Israel’s long-standing policy of differentiating between Iran’s pursuit of nuclear weapons and other aspects of its objectionable behavior. While Iran’s nuclear project was deemed an existential threat, neither its support of terrorism nor its success in “grabbing” other Middle Eastern states were viewed as unacceptable. Indeed Israel sometimes went so far as to signal that while it would go to any length to prevent Iran from obtaining nuclear weapons, it was not picking a wider fight with Tehran. Thus, when only a few weeks ago Israel decapitated a Hezbollah command team on the Golan Heights, it signaled that it did not know that the Iranian general who was killed on that occasion would be visiting that day.