In Defense of Free Trade 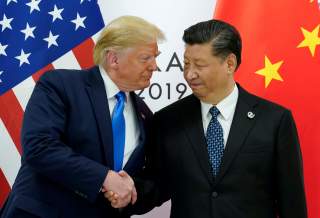 DONALD TRUMP more or less runs the show on world trade these days. That leaves the United States and the rest of the world in considerable need of clearer direction and more prudence than they have heretofore experienced. At the very least, the president’s contradictory rhetoric and actions have made it all but impossible for nations to respond in a coherent fashion. And while some wonder how to engage the White House, Trump’s belligerent manner and complete lack of caution invite comparable behavior in others. The whole package has placed the United States and the world at risk of recession—or worse. Trump’s agenda, if it deserves that name, may have successes, but it has more potential drawbacks than benefits, and history shows that some of those are downright terrifying. There is no getting away from it; this White House is playing with fire.

In this precarious situation, it hardly helps that Trump’s critics have abandoned all subtlety. Though they are loath to admit it, the president does have a point: China, and to a lesser degree the European Union (EU), have consistently sought unfair advantages that hardly constitute free or fair trade and that have hurt the U.S. economy and others. Many would benefit if China, the EU and others who have gamed the system were brought back under more equitable rules. Nor is it reasonable to claim, as Trump’s critics have, that he aims to destroy the “rules-based” trading system that this country created after the Second World War and has championed ever since. That claim is nonsense. The original U.S. push for universal free trade died decades ago. It was replaced by a scramble for what diplomats call “free trade agreements” but which should more properly be called preferential trade agreements (PTAs), as they allow freer trade among signatories but otherwise exclude and seek advantages over most of the rest of the world. Though it falls far short of free trade, perhaps the current practice deserves protection from Trump anyway, but a little realism about what people are protecting would help.

THE SMOOT-HAWLEY Tariff Act lies behind people’s legitimate fears of Trump’s tariffs and belligerence. That old piece of legislation was conceived and passed for the best of reasons.

After the market crash of 1929, Senator Reed Smoot and Congressman Willis C. Hawley wanted to protect American jobs from foreign competition. They framed legislation that placed tariffs of between 20 and 60 percent on imports of some twenty thousand products. President Herbert Hoover signed it into law on June 17, 1930.

More than even the most elegant and persuasive economic theories, the Smoot-Hawley experience has eloquently made the case for open trade and against trade restrictions. By raising the prices of imports, those tariffs immediately raised living costs for millions of Americans at a time when most could ill afford it. Not only did the tariffs raise the prices of imports, but by raising costs throughout the supply chain, they also imposed rising costs on even purely domestic producers. The attendant drop in demand led to production cutbacks, falling profits and layoffs, all of which exacerbated the already difficult economic situation. What is more, the tariffs invited retaliations from trading partners. Their tariffs kept out American products, further limited American sales and also subjected retaliators to the same economic ills besetting the United States. Those adverse effects further depressed global economic activity so that a downward economic spiral fed on itself.

The economic statistics from that time are compelling. In the quarters and years after the tariffs went into effect, global trade collapsed. U.S. imports fell 40 percent but exports fell an even steeper 75 percent. American farmers lost 20 percent of their wheat sales, 40 percent of their tobacco sales and 55 percent of their cotton sales. World trade shrank some 67 percent in the two years following the bill’s passage, reversing the previous forty years of global economic integration. It is impossible to disentangle the effects of trade restraint from other adverse influences on the U.S. and world economies, but the evidence suggests that Smoot-Hawley made the difference between what would have been a severe recession and the Great Depression that actually occurred. It is noteworthy in this regard that the unemployment rate, which had risen in early 1930 to some 9 percent of the workforce, had already fallen to 6.3 percent by June—just before the tariffs went into effect. It would seem that the economy was on the mend. After the tariffs took hold, unemployment rose to more than one-quarter of the country’s workforce. The stock market anticipated the economic harm: on the day the Smoot-Hawley tariffs became law, stock prices crashed 10 percent.

It was primarily this ugly experience that impelled the United States to promote free trade during and after the Second World War. From FDR through Truman, Eisenhower, Kennedy and into Johnson’s administration, the country pressed for the universal elimination of tariffs, quotas, subsidies and trade restraints in general. Washington pursued no special trade arrangements with individual trading partners or groups of them. Rather, it advanced its agenda through the General Agreement on Tariffs and Trade (GATT), the precursor to the World Trade Organization. In a series of what came to be called “rounds,” representatives of the world’s trading nations met and agreed to reduce tariffs and other restrictions. The so-called Kennedy Round in the 1960s alone reduced tariffs 10 percent across the board. Surely, some of the world’s remarkable economic growth during this time was due to these efforts.

Washington began to change its approach during the last third of the twentieth century. Nixon took the dollar off gold in 1971, mostly to punish Japan and Germany for refusing to revalue their currencies up from levels set in the late 1940s when they were far less than the economic powers they had become. As Washington began to consider advantage in trade and relative U.S. economic power waned, the GATT effort lost force, and with it, so did the whole push for universal reductions in trade restrictions. By the 1980s, the rise of Japan as an economic powerhouse made Washington turn to special bilateral arrangements with Tokyo to contain what it saw as an economic threat. At the same time, Europe had secured its own preferential trade agreement in what was a precursor to the European Union. Though European structures opened trade among EU members, they offered signatories protections against competition from outsiders, most particularly in agriculture. It and other trading nations thwarted a further GATT effort to reduce trade restrictions. It took time for the GATT effort to die, but it finally did when the so-called Doha round languished for seven years before finally failing in July 2008.

During this extended period of decline, world powers turned increasingly toward PTAs. For some, these offered a second-best solution to the failing universal approach. For others, they offered a way to attain an advantage. Diplomats and politicians, in the spirit of the earlier effort, insisted on calling these treaties “free trade agreements.” President George H.W. Bush negotiated the North American Free Trade Agreement (NAFTA) in the 1980s, which President Bill Clinton signed into law in the early 1990s. This deal did implement free trade between its signatories (the United States, Canada and Mexico), but not for anyone else. The EU, for its part, secured greater freedom among its members but continued to subsidize its industry against foreign competition, impose tariffs and authorize quotas. If the Trans-Pacific Partnership (TPP) had succeeded, it also would have had the same PTA qualities—it pointedly excluded China from what was primarily an Asian arrangement. If it had gone into effect, so too would the Transatlantic Trade and Investment Partnership (TTIP), which excluded many nations that had trade relations with the negotiating countries.

ENTER TRUMP. While his White House has said little about earlier U.S. trade policy, Trump has declared the PTA-centered approach of the last few decades a failure. He claims that the United States has played by the system’s rules but that others have either cheated or manipulated the terms of PTAs to their advantage and to America’s disadvantage. From what the White House has done and said, it is possible to tease out what looks like a two-pronged fix for what Trump believes is broken. The first prong would step away from PTAs or renegotiate them to get a better deal for the United States. The second prong would force trading partners, mainly the EU and, more pointedly, China, to cease their less-than-forthright behavior and proceed more in the spirit of free and open trade.

Trump accordingly ended negotiations on the TPP and renegotiated NAFTA. The former was near death anyway by the time Trump came to power. The TTIP was already a dead issue. On NAFTA, he added to the confusion about his guiding principles, if any, by using this country’s overwhelming economic power to bully concessions out of Canada and Mexico that aim more to disadvantage the two other members of the agreement than to even the scales as Trump claims. On the basis of this behavior, Trump could be labeled an economic nationalist or even a mercantilist.