In Defense of Obama’s Nuclear Record 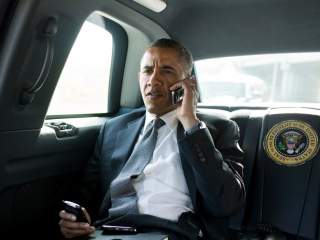 In 2009, President Obama delivered a speech in Prague that outlined his nuclear policy agenda. The most notable aspect of his speech was its call for a world without nuclear weapons; this goal became known as the Prague agenda. The president declared that “the United States will take concrete steps towards a world without nuclear weapons.” In the very next sentence, however, the president cautioned, “Make no mistake: As long as these weapons exist, the United States will maintain a safe, secure and effective arsenal to deter any adversary, and guarantee that defense to our allies.” The president’s supporters championed his call for nuclear disarmament. Deterrence hawks feared unilateral disarmament. However, after two terms of disagreeing on nearly every issue related to nuclear policy, the administration’s allies and critics now seem to agree on one thing—Obama’s nuclear record has been a disappointment at best, and a failure at worst.

This criticism is unwarranted. It primarily rests on a misconception or misreading—deliberate or otherwise—of what the president said in Prague. Read carefully, the Prague speech outlined an agenda that was never as radical as his supporters hoped or his critics feared. Simultaneously pursuing disarmament and deterrence demonstrates continuity with every presidential administration since at least the end of the Cold War. If we are to use the entire Prague speech as a starting point, rather than just one line of it, Obama has successfully followed through on the speech’s major themes—nonproliferation, nuclear security and disarmament—while acknowledging that nuclear deterrence will continue to be a component of U.S. defense policy.

The administration has made the most progress in nonproliferation. If properly implemented, the Iran deal will eliminate Tehran’s capacity to develop nuclear weapons for at least decade. American and allied diplomats produced the most comprehensive and detailed verification regime of any nonproliferation agreement ever negotiated. While the financial assets that Iran regains from the deal are worrisome, it is arguably a small price to pay for the limitations that Tehran accepted on its nuclear activities, and for the scrutiny the United States and the international community now has over the entire Iranian nuclear fuel cycle. There is now one nuclear outlaw in the world—North Korea—rather than two.

The administration’s commitment to nuclear security may have done more to further international security than any single initiative of the Obama presidency. The president has convened three Nuclear Security Summits—the final has just been convened in Washington—where heads of state have implemented initiatives to secure nuclear weapons and fissile material. While the summits may not outlive this administration, they made nuclear security a first-order international priority, and created incentives for government bureaucracies to institutionalize cooperation on this issue.

The administration reduced the role of nuclear weapons in the country’s national security strategy. The 2010 Nuclear Posture Review stated that the “fundamental role” of U.S. nuclear weapons was to deter a nuclear attack against the United States and its allies. It added that the role of America’s arsenal to deter conventional attacks had “declined significantly.” This represented an important shift in U.S. declaratory policy. Prior to this document, official statements noted that U.S. nuclear weapons deterred nuclear, chemical and biological attacks as well as conventional aggression. By explicitly defining their primary purpose, the document made clear that U.S. nuclear weapons would only be used in the most extreme circumstances. While it did not go as far as some would have hoped—in particular, it declined to adopt a “no first use” pledge— the “fundamental” formulation reduced the profile of the U.S. nuclear mission while maintaining deterrence.

In Prague, Obama said, “I state clearly and with conviction America’s commitment to seek the peace and security of a world without nuclear weapons.” But how has he fared on his disarmament pledge? The administration has made incremental progress. Between 2009 and 2014, the United States reduced its warhead stockpile by 7 percent—from 5,113 to 4,717—and dismantled 1,859 inactive warheads during the same time period. The year after the Prague speech, the White House concluded the New START treaty with Russia. The treaty obligates each country to reduce the number of deployed strategic nuclear warheads to 1,500 a piece by 2018. While disarmament advocates may chafe at the incremental nature of nuclear reductions during the Obama administration, concrete progress was made. Deeper mutual cuts have been vetoed by Russia, not the United States.

In addition to nonproliferation, nuclear security and disarmament, Obama made clear that there was a fourth pillar to the Prague agenda—to maintain a safe, secure and effective U.S. nuclear arsenal so long as other nuclear states maintained theirs. He affirmed that all instruments of American national power, including nuclear weapons, would be used to defend the interests of America’s allies. Some friends of the president believe that the administration’s efforts to modernize the entirety of the nuclear triad—the ability to deliver nuclear weapons from airplanes, submarines and ground-based missiles—are excessive, and that the United States should instead invest in conventional capabilities. Many are especially critical of plans to develop a long-range stand-off cruise missile (LRSO) to replace the current air-launched cruise missile. Prominent critics argue it is redundant, costly and destabilizing. However, the administration argues that replacing the system is necessary because the age of the existing air-launched cruise missile makes them vulnerable to modern air defenses. While the LRSO will be costly, it is arguably the cheapest element of the triad to replace. Tough choices will be made as the cost of modernizing the nuclear triad peaks in the next decade, and the Pentagon refocuses on offsetting high-end threats from Russia and China. Obama has left these tough choices to his successor.

Despite his accomplishments, the president couldn’t reconcile all aspects of the Prague agenda. North Korea has conducted three nuclear tests and developed an ICBM. The administration didn’t deliver a vigorous policy response until this year, when it stepped up military exercises with Seoul and began talks to deploy THAAD in South Korea. Obama never made a sufficiently vigorous case for the nuclear-test ban treaty. The White House should have displayed stronger leadership in his first term when the Senate balance made ratification a possibility. Nevertheless, a Senate that in 2012 rejected an international treaty to protect the rights of the disabled could hardly be expected to ratify a nuclear-test ban.

Obama delivered his Prague speech during an auspicious moment for nonproliferation, disarmament and great-power relations. That time has passed. Russia invaded Ukraine, annexed Crimea, and stated that it considers NATO and the West its military adversary. China is building islands for military bases in the South China Sea and is unhelpful in reigning in North Korea’s nuclear ambitions. With relations between the major powers deteriorating, the president has not gotten the help he needs for deeper cuts, let alone eliminating nuclear weapons.

Nevertheless, the downturn in great-power relations makes the Prague agenda more important than ever. Obama offered a long-term vision—not a quick fix—to further American interests. By preventing proliferation, securing nuclear materials, pursuing disarmament in tandem with Russia, and honoring its own security and deterrence commitments, the United States furthers its own security and those of its allies.

Obama’s soaring rhetoric in Prague inspired expectations that were, in hindsight, unrealistic. Like the man who delivered it, the Prague speech was in fact cautious, analytical and precise. That doesn’t mean the vision he articulated should be abandoned. The challenge in the next presidential administration—and the many that follow—will be implementing realistic steps to reduce nuclear dangers in a world that seems increasingly dangerous.

Shane Mason is a Research Associate at the Stimson Center.