In Defense of Rex Tillerson 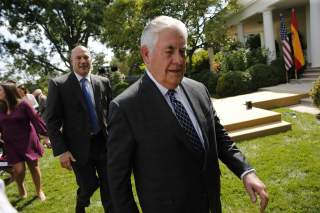 Never in the last twenty-five years has the U.S. State Department had a secretary of state subjected to such vitriol as Rex Tillerson in the first nine months of the job. Tillerson is getting hit from all sides. Democrats view him as too willing to disregard human rights, and Republicans are perturbed by what they view as a personal quest to turn the State Department into a skeletal structure.

Whereas his predecessors were given the benefit of the doubt early on in their tenures, Tillerson’s honeymoon has been extremely short. Criticism of his management style, his differentiation of U.S. values and interests, his micromanagement of administrative tasks (like individually signing off on the hundreds of reports that the department sends Congress every year), and his avoidance of the news media started during his first month on the job and it hasn’t stopped yet. Tillerson has very few defenders in Washington from the former foreign policy intelligentsia; Eliot A. Cohen, Secretary of State Condoleezza Rice’s counselor and a senior George W. Bush administration official, told Axios that Tillerson “really will go down as one of the worst secretaries of State we’ve had.” Others, like Tufts University Professor Dan Drezner, wonder if Tillerson even wants to be secretary anymore.

While some of these knocks on Tillerson may seem too personal for comfort, others are perfectly fair to bring up. Judging by anonymous quotes of foreign service officers pouring their hearts out to reporters, there is a serious identity crisis within the State Department under Tillerson’s leadership. Despite his pledge to employees earlier in the year that his door would always be open, Tillerson has surrounded himself with a few trusted advisers who jealously guard the secretary’s access and insulate the Seventh Floor from the worker bees below. There is also a very legitimate question as to whether downsizing the State Department’s staff and cutting its budget by $10.1 billion is a smart move in a world where internal conflicts are ongoing and tens of millions of people hold refugee status.

But to criticize Tillerson for everything that is going wrong in U.S. foreign policy today rings hollow for several reasons, many of which Tillerson’s critics either conveniently ignore or refuse to acknowledge.

First, let’s not pretend that the State Department has the same juice in this administration as in others. While Tillerson certainly deserves some blame here for not staffing his agencies, it’s not as if President Trump has publicly expressed his thanks and appreciation for the work that America’s foreign service officers and civil servants perform on a daily basis. Trump’s national security team is dominated by acting or retired members of the military; Jim Mattis, John Kelly, and H. R. McMaster hold far more power in the National Security Council than Rex Tillerson does. And that’s not entirely Tillerson’s fault—unless the former Exxonmobil chief is willing to chirp in the president’s ear and annoy him to the point of being shut out entirely, the best Tillerson can do is maintain whatever power the department has.

Tillerson also deserves a little sympathy. Serving as the top U.S. diplomat is a tough job on a good day and requires constant energy, conflict management and mediation skills, the ability to fly into a crisis when people start shooting at each other, and the patience to deal with many lawmakers who think they could do the job just as well or even better than the current occupant of the department’s upper floor suite. All of this, however, becomes much, much harder when the secretary reports to a commander-in-chief who enjoys saying whatever is on his mind at any given moment of the day. International diplomacy requires a patience and subtlety that Trump has only demonstrated periodically. These attributes may not matter all that much if you’re the secretary of interior or if you’re the U.S. ambassador to Switzerland, but they are quite important for a secretary of state responsible for traveling around the world and implementing U.S. foreign policy. It’s not on Tillerson’s shoulders if America’s allies, partners and adversaries are confused about what U.S. policy is—that’s all Trump.

Finally, one cannot ignore the fact that Tillerson is operating in an environment where his boss has a curious habit of cutting him off at the knees. During the opening weeks of the dispute between Qatar and its Gulf Arab neighbors, Tillerson attempted to strike a middle ground, placing phone calls to all sides to stop the infighting and start negotiating a way out of the stalemate. Trump undercut Tillerson’s position almost immediately, all but calling Qatar a state-sponsor of terrorism and taking credit for the Saudi-led embargo on the island that his own diplomats were trying to resolve. The state and defense departments made an effort to walk those comments back and Tillerson even engaged in some shuttle diplomacy in the region to bridge the Gulf Arab divide, but Trump’s tweet sullied any impartiality that Washington could present.

The same development has occurred on North Korea. While Trump is busy calling Kim Jong-un names and threatening North Korea’s existence with “fire and fury,” Tillerson is attempting to calm things down by ensuring that Pyongyang understands what the U.S. hopes to achieve. Washington, Tillerson has stated repeatedly, does not wish to change the regime in Pyongyang or turn the country into a parking lot; what it wants is a denuclearization of the Korean Peninsula and the return of serious negotiations to carry that goal out. He even candidly said that the administration not only retains direct channels of communication to the North but is also using those channels to establish contact.

A day later, Trump tweeted out a message to Tillerson that he’s “wasting his time,” essentially labeling his diplomatic efforts as foolish or naive.

Could Rex Tillerson be a better and more proactive leader in Foggy Bottom? Could he run the State Department in a more conventional way? Sure, he could. Does Tillerson need to speed up the nomination process? Absolutely.

But we have a duty to be fair—Tillerson is not the only problem. Even a great secretary like George Schultz or James Baker would be rendered partially ineffective if they worked for Trump.