Defense at a Time of Strategic Transition 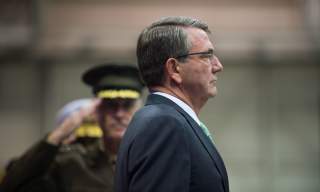 Thanks for that kind introduction, John [Hamre], and for the first-ever Nunn Prize. This is a particular honor for me because I have such respect for both CSIS and for Sam Nunn.

Few people over the past 50 years have made more lasting and forward-looking contributions to America’s security than Sam Nunn. As a Senator, Sam was a serious and studious steward of our national defense in the last decades of the Cold War and thereafter. As Chairman of the Senate Armed Services Committee, Sam was a leader in strengthening and reforming the Pentagon. And in the years since, he has been a true statesman, helping guide America’s relationship with the world, particularly on nuclear weapons.

Through it all, Sam has demonstrated that he understands that America’s defense is so vital that we, to whom it is entrusted, must ensure its continuity and excellence across the years, across the domains of armed conflict not just air and land and sea, but space, and cyberspace, across parties, from presidential administration to presidential administration—and in that connection, I’m committed to helping President-elect Trump and his team hit the ground running—and also across our government, and from strategic era to strategic era.

That last one is important and is the theme, I think, of what this recognition of Sam Nunn means. Sam and I worked closely together—a quarter century ago and with his friend and colleague Dick Lugar—to confront the unique challenges of another transition between strategic eras at the end of the Cold War.

Now, early in that transition, Sam and Dick—almost alone in the country and the world—foresaw a few important developments.

First, the Soviet Union’s was the first-ever disintegration of a nuclear power. Second, while people had considered accidental nuclear war since the Cuban Missile Crisis, few appreciated that nuclear command-and-control would not, could not, be immune from the disintegration of a society in which such controls were embedded. And in that new situation, Sam and Dick knew that deterrence alone would not protect us against destruction. And third, they also appreciated that to prevent that new danger from becoming a threat, the United States would need to work with, and not against, the custodians of the former Soviet arsenal. And after having spent half a century and billions upon billions of dollars bringing the Soviet Union to its knees, we would need to help them, even fund them, to secure the vast nuclear legacy of the USSR.

That last idea, as many of us remember, and—as Sam later called it—was a little “wacky.” It was counter-intuitive, it was innovative, it was controversial at the time. But it was right.

It did so because Sam and Dick knew that at a time of strategic transition, we needed to be willing to take bold steps, consider things that seemed to be counterintuitive—some might even think wacky ideas—and develop new ways of thinking, operating, and investing to continue to keep the nation safe.

That’s an important lesson to remember today, at a time of great change—economic, and political, and military, and social, and technological change—and of greater and fiercer competition even than marked those early post-Cold War years—competition for the lead in technology and human talent, competition for power, and competition of ideas about how the world should be ordered.

In this time of time of strategic transition, and against this competitive background, the Department of Defense is making a corresponding transition, from an era dominated by over a decade of skillful but all-absorbing counterinsurgency and counterterrorism campaigns, to one where we must contend with a wider range of strategic problems.

Across this range, DoD is confronting today no fewer than five immediate, but distinct, and each evolving challenges. We’re countering the prospect of Russian aggression and coercion, especially in Europe—something we haven’t had to worry about for the last 25 years, but now we do. We’re also managing historic change in the Asia-Pacific—the single most consequential region for America’s future. We’re strengthening our deterrent and defense forces in the face of North Korea’s continued nuclear and missile provocations. We’re checking Iranian aggression and malign influence in the Gulf, and helping defend our friends and allies in the Middle East. We’re countering terrorism and accelerating the certain and lasting defeat of ISIL. And, all the while, the Defense Department is also preparing to contend with an uncertain future—ensuring that our military is ready for challenges we may not anticipate today.

And the question I’ll address in this acknowledgment of Sam tonight is the same as it’s been to me for all the time I’ve been Secretary of Defense: which is how do we successfully confront these challenges and prepare for that uncertain future?

And the answer, fundamentally, is the same as it was 25 years ago: it has been necessary—it will be necessary—for DoD to change, to adapt, to innovate . . . not only to meet today’s challenges, but ensure our defense’s continued excellence well into that uncertain future.

So I want to speak tonight about the changes underway to respond today’s challenges—focusing particularly on the military campaign to accelerate the lasting defeat of ISIL, our Strong and Balanced Strategy on Russia, and our rebalance to the vital and dynamic Asia-Pacific. And I’ll also describe the actions underway—and innovations we’re making—to ensure that the defense department has the technology, the operational plans, the organization, and the people to continue to defend our country and make a better world for decades to come.

Let me start with ISIL. We’ve reached a critical milestone in our counter-ISIL campaign.

As we meet [in January 2017], American forces are engaged, with our coalition and local partners, in an intense effort to collapse ISIL’s control over Mosul in Iraq and Raqqa in Syria, bringing the great weight and our entire range of capabilities to bear in the enabling of capable and motivated local forces. The seizure of these two cities is necessary to ensure the destruction of ISIL’s parent tumor—the primary objective of our military campaign in Iraq and Syria and to destroy both the fact and the idea that there can be an Islamic state based upon this ideology—put ISIL on an irreversible path to a lasting defeat.

Reaching this milestone is a direct result of deliberate actions taken since 2015. First, and going back to summer 2015, I’ve consolidated the efforts for Iraq and Syria under a single, unified command—streamlining our command-and-control for the fight against ISIL, which we had not had. Then, in October 2015, President Obama approved the first in a series of recommendations that I and our Chairman of the Joint Chiefs of Staff Joe Dunford made to accelerate the campaign against ISIL—introducing every single tool of our military into this fight. And I should tell you, by the way, that since then President Obama has approved every recommendation that the Chairman and I have taken to him for additional forces and capabilities, as we’ve seen and sought to seize opportunities to accelerate the campaign.

We then revised our overall Coalition Military Campaign Plan, setting out three objectives:

First, as I said, to destroy the ISIL cancer’s parent tumor in Iraq and Syria. Now that’s necessary, but it’s not sufficient. So the second objective is to combat ISIL’s metastases everywhere they emerge around world: in Afghanistan, in Libya, and elsewhere. And the third objective is to work with our intelligence, homeland security, and law enforcement partners to help protect our homeland and our people from attack—ultimately DoD’s most important mission.

The strategic approach of our military campaign in Iraq, Syria, and elsewhere is to leverage all the tools at DoD’s disposal to enable capable, motivated local forces to deal a lasting defeat to ISIL. This strategic approach is necessary because the only way to ensure that, once defeated, ISIL stays defeated, is to enable local forces to seize and hold territory rather than attempt to substitute for them.

And consistent with this approach, we’ve employed some of the U.S. military’s most extraordinary capabilities, and some of our most specialized personnel—from air power and special operations forces, to train, advise, assist capabilities on the ground, to intelligence, cyber tools, logistics. These assets and our personnel have been able not only to help directly enable local forces on the ground; they also bring to bear the full weight of American and coalition military might.

By combining our capabilities with those of our local partners, we’ve been squeezing ISIL by applying simultaneous pressure from all sides and across all domains, through a series of deliberate actions to continue to build momentum. For example, when our special operators conduct raids, free hostages, gather intelligence, and capture ISIL leaders, it creates a virtuous cycle of better intelligence, more targets, more raids, more air strikes, and more opportunities we can seize to gain even more momentum.