Defund the Police Means Law and Order for Only America's Elites 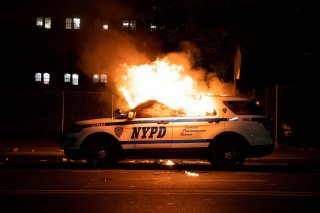 When the law breaks down and anarchy and violence reign, only the wealthy, powerful, and corrupt thrive.

In a moment of clarity, Rep. Cori Bush (D-MO)—a “rising star“ in the Democratic Party—perhaps unwittingly put a spotlight on this reality in an interview with CBS News. Bush, who had slept outside the capitol building to protest the end of the eviction moratorium, explained why she needed to spend $70,000 on private security.

Bush explained that to protect herself she would spare no expense and that she needed the security because people want to kill her and she “had work to do.”

What kind of work?

“Defunding the police has to happen,” Bush said. “We need to defund the police.”

Bush has every right to defend herself if she feels threatened, but don’t regular people have that right too? What about those who aren’t members of Congress and can’t go around with an armed detail of private security?

The truth is that the defund the police movement won’t further social justice or really any kind of justice. Instead, it produces a kind of neo-feudalism, where the rich and powerful can evade its consequences while everyone else suffers.

Following the death of George Floyd at the hands of a Minneapolis police officer in May 2020, calls to defund police departments became a rallying cry for left-wing activists. These activists, who often accuse police departments of systemic racism, have demanded shifting funds away from traditional policing and into public health services and schools.

Seattle, Portland, Los Angeles, New York, Washington, DC, Philadelphia, and Minneapolis were among the many cities that decided to defund the police in 2020.

The result? Almost all are being hit with an extraordinary and unabating amount of violent crime.

In April, the FBI released data showing that the national murder rate increased 25 percent in 2020. It was the largest single-year increase in homicide since the FBI began tracking that information in 1960.

Now, many of the cities that defunded their police departments are reversing themselves.

Unfortunately, much of the damage may have already been done regardless of how much cities restore police funding.

A June survey conducted by the Police Executive Research Forum found a dramatic increase in police officer retirements and resignations in the past year.

“In Seattle, a record 180 officers left the police department in 2020 and 66 more officers have left so far this year,” the survey reported.

Other departments have been similarly impacted.

The problem police departments are having is that they are dealing with an exodus of staff while also struggling to replace those who have left. The Police Executive Research Forum survey found that, on average, agencies are only filling about 93 percent of their vacancies.

We now have a real law enforcement crisis brewing as crime surges around the country while police departments are rapidly losing manpower. This stark personnel drop suggests something else is going on in police departments besides just the ill-fated defunding craze.

It’s about more than just the money.

The most plausible explanation is the so-called Minneapolis Effect. That is, a sharp reduction in proactive policing like frequent street patrols and traffic stops because of last year’s protests and the anti-police rhetoric of activists and politicians. This may explain why these trends aren’t generally occurring outside of big cities and urban areas where most anti-police protests took place.

Now the cities rocked by violent crime have a twofold problem. A serious shortage of manpower and a dwindling number of qualified people willing to replace them in a hostile political environment. If this problem continues, it isn’t hard to see many of our urban areas slip back into the high-crime wasteland many became in the 1970s and 1980s.

President Joe Biden and other prominent Democrats deny that defunding the police ever had much sway in the Democrat Party. White House Press Secretary Jen Psaki even absurdly tried to pin the idea on Republicans because they didn’t vote in favor of a larger spending bill that included police funding. That progressive city governments voluntarily chose to defund their police departments and pull back on proactive policing doesn’t mean we should nationalize the whole system.

Defunding the police doesn’t exactly poll well, so it’s not hard to see why prominent Democrats who have to sway more than just a militant left-wing base balk at wholeheartedly endorsing it. Especially now as many cities are scrambling to rebuild decimated police departments.

Whatever Biden and Psaki say in denial of Democrat complicity in the defund movement, it’s hard to dodge the reality that the defund the police movement has been a project of the left. It’s also hard to escape the result of the policy change, which almost immediately produced more violent crime and less safe cities. Again, a self-inflicted disaster.

So, when a Democrat congresswoman talks about defunding the police while insisting on high-priced private security, she is actually giving us a snapshot into the future her ideas create. The upper classes who can afford to will escape the cities, retreat to gated communities, and rely on private security to protect themselves. Everyone else who can’t afford to leave will be left to fend for themselves in increasingly violent and lawless urban landscapes.

Given that most of the victims of this violent crime surge have been black and Latino, it’s hard not to conclude that minorities suffer most from this foolish policy.