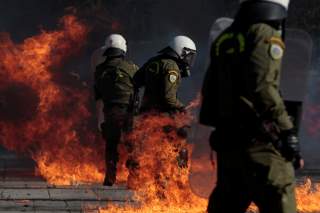 Political extremism and radicalization in liberal democracies are not new phenomena. For the past several hundred years, Western thinkers have struggled to determine how far a citizen of a liberal democracy could legitimately go in expressing his or her beliefs and, more importantly, acting on them. They have also wrestled with the related question of how limited government—institutionalized through doctrines like checks and balances and the separation of powers—can best support individual endeavors and aspirations whilst defending the constitutional order against those who seek to endanger it.

Contemporary debates on counterterrorism, for instance, are conceptually not that far off from twentieth century ones about countering totalitarianism on both the left and the right. Then, as now, the line was usually drawn at sedition: one may publicly criticize all one wants whilst making use of the electoral process to effectuate the change one seeks—this legitimately falls within the prescribed limits of free speech and lawful political action.

An altogether different problem arises when a liberal democracy—especially one in its nascent stage—becomes incapable of countering the nefarious ambitions of an elected leader who pays lip service to the institutions of the constitutional order to rule in a manner that endangers its core tenets; in other words, when a leader abrogates his fundamental responsibility to the people by equating the perpetuation of his personal reign with the ongoing authority of the state.

Some of the most insightful writings on this problem are to be found in the final volume of Alexis de Tocqueville’s magnum opus, Democracy in America (1840)—in those chapters that constitute an examination of challenges common to democracies tout court. The French political philosopher warns of the dangers of “soft despotism,” whereby a leader conspires against his own citizenry, endeavoring to weaken, isolate, and alienate each of its members through the creation of an “immense tutelary power.”

All-powerful and elected, such an “irresponsible” leader sees himself as “alone tak[ing] charge of assuring citizens’ enjoyments and watching over their fate.” This would resemble, Tocqueville writes, “paternal power if, like that, it had for its object to prepare men for manhood; but on the contrary, it seeks only to keep them fixed irrevocably in childhood; it likes citizens to enjoy themselves provided that they think only of enjoying themselves. [ . . . ] It wants to be the unique agent and sole arbiter of that,” and “penetrate the sphere of private interests more habitually and more deeply.”

This modern form of what Tocqueville calls “servitude” is achieved in part through “subjugation in small affairs, [ . . . ] constantly thwart[ing] [men] and brings them to renounce the use of their wills. Thus, little by little, it extinguishes their spirits and enervates their souls.” It renders citizens “so dependent on the central power” through habituating obedience that they “lose little by little the faculty of thinking, feeling, and acting by themselves.” [ . . . ] “Thus, after taking each individual by turns in its powerful hands and kneading him as it likes, the sovereign extends its arms over society as a whole; [ . . . ] it rarely forces one to act, but it constantly opposes itself to one’s acting; it does not destroy, it prevents things from being born.”

Tocqueville’s portrait of despotism arising in democracy is “soft” when compared to, for example, the Jacobin terror, Leopold II’s heart of darkness in the Congo, Stalin’s gulag archipelago, Hitler’s totalitarianism and its culmination in the Holocaust, or the Khmer Rouge’s genocidal social engineering. Yet by propagating anxiety, doubt, and uncertainty; hindering any prospect of hope, the driving force behind all democratic institutions; and systematically imposing tutelary dependence and servility on an unsuspecting populace, it represents a degradation of the human spirit just the same.

Soft despotism propagandizes the prestige of unlimited power and denigrates the rule of law, exerting enormous influence on the course of any society it enshackles. It encourages uniform mass opinions, gives birth to prejudices, and fosters ever-deepening divisions. It designates as mortal enemies those who oppose its stranglehold on the nation, delivering the fate of an entire people to the savage political instincts of those most capable of channeling society’s fears, vices and fissures.

Regrettably, soft despotism continues to manifest itself in various forms in a number of nations across the Old Continent, including in those parts of the Balkans that remains outside the European Union.

Specific circumstances have eased the way for the sort of despotic leaders described by Tocqueville to seize power and establish a type of regime that has come to be known as “stabilitocracy.”

Political scientists like Florian Bieber, Srdja Pavlović, Antoinette Primatarova, and Johanna Deimel have contributed to defining this contemporary phenomenon: a reactionary manner of personal rule that claims to secure stability, feigns the espousal of European values, and professes to support EU integration whilst in reality relying on authoritarian means to stay in power. Such methods include: promotion of a single-party political culture; reliance on informal kleptocratic structures; significant electoral irregularities; control of the media landscape; slanderous vilification of opponents; collaboration with organized crime figures; extensive exploitation of state resources for political advantage; suppression of citizens’ fundamental rights and freedoms; downgrading of parliamentary debate; and regular production of crises to undermine the rule of law and subordinate the independence of state institutions like the police, the military, the judiciary, and the tax authority.

Stabilitocracy does share certain features with what has been defined variously as managed, illiberal, hybrid, or majoritarian democracy—or what Larry Diamond has called postmodern autocracy: an “arrangement that leaves the shell of democratic institutions standing but hollows out the pluralist essence—a free press and civil society, an independent judiciary, a fair electoral playing field—that it is nearly impossible to defeat the ruling party through normal politics.” But it is distinct from these other contemporary threats to liberal democracy for at least two reasons. First, it distinguishes between those countries whose EU aspirations are widely understood as realistic such as the Western Balkans, others that although geographically proximate have no credible chance to join the Union, and still others that are already members. Second, it adds the crucial factor of a grant of external legitimacy to the understanding of contemporary Balkan despotisms.

This last is the most distinctive feature of stabilitocracy, one that thinkers such as Tocqueville did not consider in their writings. The modern-day Balkan stabilitocratic despot relies on what is portrayed as the public support of the European Union and its member states, as well as other external actors, to maintain his grip on power. This rule is reinforced by what appears to be a tacit agreement between the despot and certain European decisionmakers that as long as the former maintains the semblance of “stability” in his country, the latter would turn a blind eye to the increasing manifestation of authoritarianism. At the same time, both would seem comfortable with maintaining the illusion that accession negotiations remain steadily on track, even though there is no realistic end in sight to the process.

The contours of this pact for “stability” are not normative, but rather circumstantial. At the height of the migration crisis, for instance, it was understood to mean doing what was asked to stem the flow of refugees from the Middle East transiting through the region on the way to Central and Western Europe. More recently, it has been assumed to require high-level engagement with regional foes or competitors in theatrical exercises that have the appearance of endeavoring to overcome various unresolved issues in the Balkans.

One can trace the origins of what can be interpreted as a quid pro quo arrangement between Balkan stabilitocrats and European governments to what an August 2017 report published by the European Council on Foreign Relations characterized as the “trinity of economic uncertainty, cultural anxiety, and political alienation” that has been present throughout the EU for a number of years. One manifestation of this general feeling of malaise is the heightened skepticism of Europeans towards expanding the Union, as illustrated by the results of an October 2017 representative poll of Germans commissioned by the Körber-Stiftung, in which two-thirds of respondents voiced opposition to Balkan membership in the EU.

It is thus safe to say that the void created by enlargement fatigue facilitated the emergence of stabilitocracy in the Balkans, although one could argue that it is also part of a broader decline of democracy in the world. Freedom House has noted in its 2018 Freedom in the World report that there has been twelve consecutive years of decline in global freedom, with setbacks being observed in political rights, civil liberties or both even in countries categorized as “free.” Nearly one quarter of the countries registering declines in the past few years have been in Europe.

One of these was Serbia, whose democracy score fell to its lowest level since the restoration of democracy at the turn of the century. Similar assessments have been made with regards to other Balkan stabilitocratic despotisms. The case of Serbia, however, is particularly egregious. To quote from Freedom House’s 2018 flagship report: “In Serbia, EU leaders’ tolerance of Prime Minister Aleksandar Vučić’s authoritarian tendencies allowed him to further sideline the opposition and undermine what remains of the independent media after winning the country’s presidency in April.” The origins of these “tendencies” go back to 2012, the year he returned to power (he served as Slobodan Milošević’s information minister in the 1990s).