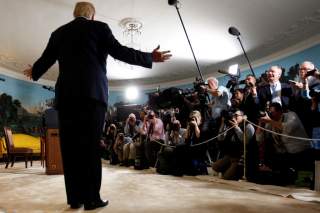 Democratic control of the House of Representatives was always going to make it harder for President Donald Trump to secure funding for his preferred policy initiatives. So far, this has been most evident in the fight over whether to construct additional fencing along the U.S.-Mexico border. But another funding battle looms, one with potentially far-reaching implications for national security: whether to support Trump’s plans to overhaul the U.S. nuclear arsenal.

Trump’s proposed defense budget, published earlier this month, asks for an 8.3 percent increase in spending on nuclear weapons and related systems. To be sure, it is not just the nuclear budget that Trump wants to enlarge: if the President gets his way, the total defense budget will eclipse military spending during the Obama era, despite the fact that U.S. involvement in war zones such as Afghanistan and Iraq was much more significant under Obama than it has been under Trump.

But Trump’s nuclear spending plans are a particularly important part of his overall defense buildup. This is because how money gets spent in this area has the potential to shape America’s entire nuclear strategy for years to come. And under this administration, a shift in nuclear strategy is unmistakably in the offing.

Even before he entered the White House, Trump made clear that he intended to pursue a defense buildup even if it meant risking a nuclear arms race with nuclear powers such as Russia and China. His administration has stuck to that script ever since. New thinking in nuclear policy was evident in the administration’s Nuclear Posture Review, for example, which made the case for a renewed focus on great power competition (especially with Russia but with an eye to meeting the challenge posed by a rising China).

The president’s decision to withdraw from the Intermediate-Range Nuclear Forces (INF) Treaty with Russia represented another break with established U.S. policy, even if some people believe that it was the right choice. Now, with the INF Treaty now consigned to history, the door is open to the United States building a new class of land-based missile delivery systems. There are also concerns that the New Strategic Arms Reduction Treaty (New START) with Russia might be axed or significantly modified as the Trump administration negotiates its possible renewal.

In short, Trump and his advisers seem to view nuclear weapons as an area where the United States needs to “push back” against its overseas rivals, embracing an arms-race mentality and committing the country to nuclear parity with (or primacy over) its peer competitors. It is in order to meet these perceived exigencies that the Trump administration has asked for a modernized nuclear force.

Most controversially, the Department of Defense has requested funding to go ahead with a new low-yield nuclear warhead to be deployed on submarines. Some in Washington argue that this is a necessary response to strategic advances made by Russia and China. The Union of Concerned Scientists counters that the modernization is “unnecessary and dangerous.” Either way, most observers agree that U.S. nuclear policy would be significantly altered (for better or worse) by the development of low-yield warheads that could be fitted to submarine-launched ballistic missiles.

But whatever the relative merits of new low-yield (“tactical”) nuclear warheads, the Trump administration’s “big picture” on nuclear policy is unlikely to shift. Investing in nuclear arms is popular with the President’s party and allows him to posture as being strong on national defense, especially in the run-up to his 2020 re-election campaign.

But as Trump has already found out, U.S. presidents do not govern by decree. If he wants to modernize the nuclear arsenal—and, by extension, pursue a significant reorientation of U.S. nuclear strategy—then Trump will have to convince House Democrats to back his proposals. The president’s chances of success will depend on whether Democrats can find political advantage in sharing the credit for any new investments in nuclear weapons, or whether they will instead choose to press ahead with their own, distinct vision of national-security policy.

Indeed, the question of nuclear spending is something of a weathervane for where the Democratic Party is headed on foreign policy and national security. Are Democrats committed to reining in President Trump’s executive powers, trimming the defense budget, and arguing for a new and more slender military policy? If so, then progressive lawmakers can be expected to condemn the president’s nuclear policies as wasteful exercises in one-upmanship; their line will be that Trump is clearly unsuitable to be making nuclear policy, and so must be opposed at each turn.

This is the path that House Armed Services Committee Chairman Rep. Adam Smith seems to find most attractive. Smith has been a vocal opponent of developing new low-yield warheads, for example, and has declared his opposition to Trump’s brash unilateralism on nuclear issues. Moreover, Smith has urged the administration to pursue multilateral arms control talks rather than succumbing to an arms race.

Other Democrats appear to be similarly committed to making a stand against Trump. Even New Mexico’s congressional delegation (all Democrats) have opposed Trump’s nuclear spending plans, despite some clear New Mexican economic benefits from the Los Alamos Nuclear Laboratory. Meanwhile, Sen. Elizabeth Warren, a presidential hopeful, has joined Smith in proposing a “no first use” policy that would limit the number of scenarios in which the president could use nuclear weapons.

Smith has even floated the idea of eliminating (or reducing in size) one or two legs of the so-called nuclear triad. The logic here is that a submarine-based nuclear deterrent should be sufficient to dissuade America’s rivals from ever launching a nuclear attack, and so additional nuclear forces are surplus to requirements. This thinking cuts in exactly the opposite direction from that being proposed by Trump and sets the stage for a showdown.

However, other Democrats have more in common with Republican hawks than they do skeptics like Smith or Warren. For instance, Rep. Elaine Luria has voiced her support for modernizing each prong of the nuclear triad. For Democrats like Luria, refusing to fund nuclear modernization would be to cede the strategic advantage to geopolitical challengers like Russia, China, and North Korea. It would also contradict recent Democratic attacks on the president for being too soft on these potential adversaries.

As Smith himself has acknowledged, a defense bill will have to be passed in one form or another. Right now, it is too early to tell whether the Democrats will make a stand against Trump’s nuclear spending plans or whether they will eventually concede the president’s demands. Yet whatever its conclusion, the outcome of this spending battle will reveal something interesting about the current trajectories of the two parties when it comes to national defense.

It is clear where the Republicans stand. But what about the Democrats? Do they believe that increased spending on nuclear weapons—especially new, potentially destabilizing weapons systems—is reckless, unnecessary, and counter to international security? Do they want to insist upon a wider rethink of America’s relationship with nuclear weapons, perhaps re-envisioning them as solely for the purpose of deterring a first-strike against the U.S. homeland? Or will Democrats prefer to avoid such difficult conversations by choosing the least line of resistance and falling in line behind the administration?

The coming spending battle between Trump and the Democratic majority in the House promises to lend some insights into these and related questions. In turn, how that battle ends—and how the battle lines were drawn—will provide a glimpse into U.S. nuclear strategy for years to come.