The Democratic War Against Trump 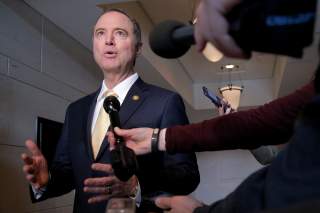 RICHARD M. Nixon brought on his own downfall, as well as the collapse of his foreign policy, when he abused his power in seeking to cover up Watergate misdeeds that were perpetrated by the White House plumbers. But that abuse doesn’t diminish a central reality of American politics: when the president is weakened at home, America is weakened abroad. It’s worth recalling what occurred during the Nixon administration and its potential implications for President Donald Trump.

When Nixon became president in January 1969, he had two thoughts firmly in mind regarding the Vietnam debacle he had inherited: victory was impossible and defeat unthinkable. The imperative of avoiding the latter in a highly unstable foreign entanglement, with no prospect of victory, was particularly salient because of his broader strategic goals for U.S. policy in Asia. Nixon wanted to pull together the rising noncommunist states of that region into a powerful bulwark of regional stability while luring Communist China out of its “angry isolation” and into a new role as a responsible Asian player. None of this would be possible, he reasoned, if America suffered a devastating humiliation in Vietnam.

Nixon thus initiated a Vietnam retreat—a slow, deliberate and highly risky military withdrawal. He placed himself in a predicament of epic proportions. His military challenge was to calibrate a difficult and dangerous maneuver in Vietnam, which could lead to disaster in the field and harm his political standing at home. At the same time, his political challenge, with antiwar sentiment at a fever pitch, was to manage an inherently unstable domestic scene, which could engulf him at home and upset his military calculations in Vietnam.

Throughout his first term, Nixon managed to wend his way through this treacherous political and geopolitical thicket with considerable skill. Then came Watergate. Nixon’s delicate balancing act came to an abrupt close, along with his presidency and any hope of a noncommunist South Vietnam. Powerful developments in domestic politics deflected the course of foreign affairs, leading to a series of congressional actions aimed at crimping the power of the White House.

Those actions are worth pondering as the country moves into a new phase in the ongoing effort to bring to account Donald Trump for presumed misdeeds and transgressions, whatever they may be. The newly installed Democratic House of Representatives seems intent on executing a Watergate redux—cutting the president’s legs off through relentless hearings, document subpoenas, a chorus of accusations and a possible impeachment thrust, though House Speaker Nancy Pelosi has indicated that she is opposed to impeaching the president, at least for now. Still, the overall aim is clear: undermine Trump and terminate his presidency at the next election, if not sooner. But as these moves surely undermine him, American power and influence in treating with other countries is also undermined.

A case in point was former Trump lawyer Michael D. Cohen’s recent testimony before the House Oversight Committee, in which he savaged his former boss at the very moment the president was involved in delicate and complex nuclear talks with the dictator of North Korea, Kim Jong-un. “Never done when a president is overseas,” the president tweeted afterward.

That was a self-serving tweet, in keeping with Trump’s standard indelicate approach to communicating with the American people. And there’s no way of knowing, of course, whether the hearings had any actual bearing on either Trump’s or Kim’s approach to the nuclear negotiations. But the hearings certainly constituted a diminished sense of political decorum in the American polity. This was not the sort of thing that happened in days of yore. Quite the contrary.

At the dawn of the Cold War, when the Truman administration began to sound alarms about the Soviet threat, prompting it to devise the Marshall Plan and support the creation of NATO, Michigan Senator Arthur Vandenberg expressed the old political etiquette in terms that became well-nigh immortal when he observed that politicians should cease “partisan politics at the water’s edge.” What he meant was that politicians shouldn’t criticize the president or the country while overseas and shouldn’t, from U.S. shores, criticize the president’s actions involving serious overseas negotiations. Even as recently as 2012, when gop presidential candidate Mitt Romney criticized President Barack Obama for remarks he made to Russian president Dmitry Medvedev, Romney drew a public rebuke from House Speaker John Boehner, also a Republican. “While the president is overseas,” said Boehner, “I think it’s appropriate that people not be critical of him or our country.” Romney’s behavior was all the more questionable, according to the old rules, because his criticism of Obama’s overseas actions was expressed while he himself was overseas as well.

It isn’t always easy to determine when a president’s international standing has been diminished by domestic political developments or attacks. But the Nixon example is stark. By June of 1972 his military withdrawal had removed nearly 450,000 troops from Vietnam, with only about 47,000 remaining. The South Vietnamese would have to repel communist forces through their own military action—but with promises of massive logistical support from the United States when needed.

And that massive logistical support was needed in the spring of 1972 when the North invaded the South with 120,000 well-trained communist troops coming down in three waves. Nixon initiated a massive bombing campaign, mined Haiphong harbor, and dried up the communist supply lines. As Robert Mann wrote in his book, A Grand Delusion: America’s Descent into Vietnam, “In the face of furious American bombing attacks, the communist offensive sputtered and the war returned to its pre-offensive, status quo stalemate.” By early summer, he added, North Vietnamese intransigence had begun to melt away, and a negotiated settlement came into view. “Further impetus for negotiations,” wrote Mann, “came from communist leaders in Peking and Moscow who were eager for improved U.S. relations.” Nixon was standing tall, reflected in his 61 percent reelection victory later that year.

With the emergence of Watergate, however, Nixon’s stature diminished precipitously. In 1973 he requested $1.6 billion to continue U.S. logistical support for the South Vietnamese. A defiant Congress slashed it to $1 billion, then to a paltry $700 million. When the North initiated its next invasion campaign, in spring 1975 (after Nixon’s resignation), Congress foreclosed any serious response to stave off the invasion. Without a strong president, strong action wasn’t possible. The war was irretrievably lost. And the Democrats, who had started the war, only to turn on it, had helped to lose the conflict. It took a decade for America, trapped in what became known as the “Vietnam Syndrome,” to recover from the calamity. Not until Ronald Reagan became president did America begin to banish the ghosts of that conflict. In talking about Vietnam in April 1984 during a press conference, Reagan said that he thought America should have formally declared war against North Vietnam, noting, “Well, maybe General MacArthur was right, there is no substitute for victory.’’

Today, it seems clear that House Democrats want to diminish Trump in a similar fashion to Nixon. But there’s a difference. Watergate reached its denouement, with a presidential resignation, within twenty-seven months, on August 9, 1974. With Gerald Ford’s pardon of Nixon, America could start to move on, and a new president take up the challenge of calming the turbulent political waters. Trump and his people have been under investigation for possible nefarious Russia ties for thirty-two months, with no end in sight and without any serious actionable evidence of actual offenses that could get the president impeached and convicted.

PELOSI MAY say that she opposes impeachment, but Judiciary Committee chairman Jerry Nadler is seeking documents from over sixty Trump associates in his pursuit of Trump misbehavior. He said his committee was “far from making decisions” about impeachment, presumably because he wanted to see what special counsel Robert Mueller turned up. But he also said he thought the president obstructed justice, hence suggesting his real intent was to initiate impeachment action as soon as Mueller issued his report.

And House Intelligence Committee chairman Adam Schiff seems to be looking beyond the Mueller probe and the old theories of Trump connivance with Russia. He is focused now on Trump’s past interest in building a hotel in Moscow, which opens the way to an expanded probe into Trump’s murky finances. Trump, declares Schiff, was “doing business with Russia” and “seeking Kremlin help”—as if that ipso facto constitutes evidence of wrongdoing.

We can’t know definitively just how much these ongoing attacks on many fronts will diminish Trump’s ability to project himself in the world as America’s leader. And of course, we must take into account the melancholy reality that Trump’s own foreign policy behavior is often erratic, incomprehensible and incoherent. That makes it doubly hard to assess the impact of his domestic enemies on his ability to do his job.

But there was one area where Trump’s adversaries did indeed undermine him in profound ways—unjustifiably, we now know. One of Trump’s major campaign promises was to seek better U.S.-Russian relations, but almost immediately he was thwarted from doing so by the allegations and suspicions of Russian collusion and the resulting criminal investigation stemming from those allegations and suspicions. The elected president’s range of diplomatic action was checked by unelected managerial mandarins in the government, and the president was under a cloud for two years.