Democrats Are Taking A Big Gamble In Withholding Impeachment 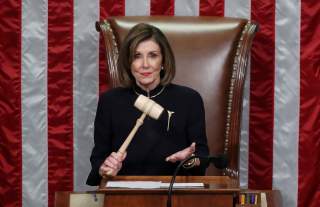 It’s been clear since September that the House of Representatives was going to impeach President Donald Trump. On Wednesday, it held the final vote, which, predictably, was 230 for impeachment and 197 against. What almost no one saw coming, however, was that the articles of impeachment would themselves get stuck in limbo.

House Speaker Nancy Pelosi (D-Calif.) says she is withholding sending the two articles of impeachment to the senate until preconditions are met that would constitute a “fair” trial. “In any event we are ready, when we see what they have we will know who and how many we will send over,” said Pelosi.

This is a huge gamble for House Democrats.

What Pelosi hopes to gain are assurances that certain witnesses will be called to testify and that the Democrats will not be shafted during the process. She’s operating on the basis of a theory first floated by Harvard professor Lawrence Tribe who argued in an op-ed in the Washington Post that Pelosi should not automatically transmit impeachment articles to the Senate: “This option needs to be taken seriously now that Majority Leader Mitch McConnell (R-Ky.) has announced his intention to conduct not a real trial but a whitewash, letting the president and his legal team call the shots.”

For now, Senate Majority Leader Mitch McConnell (R-Ky.) seems bemused at the attempted negotiations. “I admit, I am not sure what leverage there is in refraining from sending us something we do not want,” he said. He has been attempting to assert his authority of dominion, making it clear that once the Senate trial starts, he’s the impresario of it, not the White House. “Fine with me,” he concluded, if Democrats don’t want to proceed to an actual Senate trial.

Sen. Lindsey Graham (R-S.C.) tweeted that “Not allowing the Senate to act on approved Articles of Impeachment becomes Constitutional extortion and creates chaos for the presidency.” Graham is correct. The U.S. Constitution says explicitly that, “The Senate shall have the sole Power to try all Impeachments.” This means that, legally, McConnell doesn’t have any obligation to meet Pelosi’s criterion.

Some legal interpretations go so far as to say that Pelosi’s withholding the articles imperils the entire impeachment process. Noah Feldman, the Harvard law professor who was one of the House Democrats’ choices to testify as a legal expert, argues as much in a Bloomberg News op-ed.

“If the House does not communicate its impeachment to the Senate, it hasn’t actually impeached the president. If the articles are not transmitted, Trump could legitimately say that he wasn’t truly impeached at all,” he writes.

According to Feldman, the Founding Fathers viewed impeachment as a process, not a vote. Until the House recommends impeachment to the Senate, and the president is provided with the opportunity of a trial, impeachment is incomplete.

Yesterday marked the beginning of the annual two-week congressional recess that occurs during the holiday season. When the House reconvenes in early January, it still won’t have voted to appoint “impeachment managers,” which is the first step to a senate trial. Some Democrats have suggested that Justin Amash, the constitutionalist Republican-turned-Independent who’s been supporting impeachment since the Spring, should be an impeachment manager. But Pelosi hasn’t lifted a finger to indicate who she will pick or when.

And McConnell is happy to let her take as long as she likes. The more the process is artificially extended, the more of a drag it is on the news cycle and the more agitated voters become. The Republicans will have the ammunition to blame the Democrats for the slow process, after having previously complained about them moving too fast.

Indeed, if Pelosi sticks to her guns and no impeachment articles are recommended for the Senate, then this whole four-month process would end with a result surprising to everyone. And whether he runs a Senate trial by his own rules or ignores Pelosi’s list of demands, McConnell stands as the master of all he surveys.

The wild card, however, is Trump himself who is apparently itching for the Senate trial to take place in the conviction that he will be acquitted. Trump tweeted, “So after the Democrats gave me no Due Process in the House, no lawyers, no witnesses, no nothing, they now want to tell the Senate how to run their trial. Actually, they have zero proof of anything, they will never even show up. They want out. I want an immediate trial!” McConnell, however, doesn’t. For now, a kind of Mexican standoff is taking place until one side cracks.