Democrats Debate, Round 2: Who Won, Who Lost and Who Needs to Quit 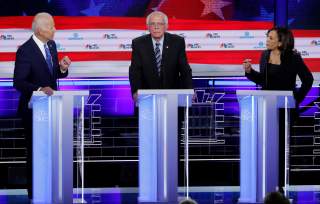 The second debate’s gravitas came from having the first and second-place candidates, Biden and Sanders respectively. The other candidates on stage took opportune moments to criticize the frontrunners and contrast them with their positions and records.

One of the most important issues discussed was health insurance and health care. Sanders and Harris joined Sen. Elizabeth Warren and New York City Mayor Bill de Blasio in calling for the criminalization of private insurance plans in favor of a government-provided plan only. Furthermore, all ten candidates on stage agreed that their single-payer healthcare plans would also include medical coverage for illegal aliens residing in the United States. Sanders said his health-care plan would increase taxes on middle class Americans, but it would be a net benefit due to the increases in government services.

Sanders, the only self-described democratic socialist on the stage, was criticized by Hickenlooper and Bennet for being too radical to be electable or effective. Sanders responded to a question by moderators intoning whether his recent position switch on gun control was genuine.

The hardest hit, however, was frontrunner Joe Biden. He was heavily criticized by Harris for his previous defense of bipartisanship with segregationists in the 1970s, and his anti-busing stance the same decade. Biden defended his record on race relations and said the de facto segregation Harris encountered as a child was a local issue, to which Harris countered that it justified federal intervention. Biden was further criticized by Swalwell for his advanced age (seventy-six), while Bennet said it was Biden who spearheaded the permanent extension of the Bush tax cuts.

Buttigieg was also criticized on the race issue, with allegations that he failed to purge racism from his local police department or make local officials be held accountable. Gillibrand, whose campaign has remained at one percent despite her stature in the senate, made every attempt to interject her views and policy programs into the conversation. Yang, who spoke only three minutes out of the two-hour debate, claims NBC turned off his microphone, a claim the network has denied. And Williamson’s new age answers focusing on spirituality lead to her becoming the highest trending debate participant on twitter.

“In my humble opinion, Kamala Harris won hands down,” said author and political commentator Doug Wead. “She emerged as the most memorable champion of African Americans and they represent the most dynamic block within the Democratic Party. Not to mention they are the majority of the Democratic voters in South Carolina, an early primary.”

“She was able to get in a solid punch while still appearing cool,” continued Wead, who thinks Harris is quickly becoming the best alternative to Democratic voters not happy with Biden’s record.

“The big question is whether it moves the needle among black voters,” agreed James Antle, editor of The American Conservative. “Maybe Kamala Harris is better positioned to do that than Bernie Sanders or Elizabeth Warren. But that’s how Barack Obama beat Hillary Clinton—he took the black vote away from her, though in his case he did so by proving his viability with a strong showing among white liberals in Iowa. If somebody is going to beat Biden, they are going to have to have more than white liberals in their coalition. Ironically, Biden’s former boss is the model.”

Dan McCarthy, editor of Modern Age, doesn’t think the policies discussed in the debates are going to hit home with middle American voters. “Harris bled Biden over busing, but what could possibly matter less to voters in 2020? On immigration, the candidates all emphasized non-American migrants over the jobs, safety, and common culture of Americans. Climate change also doesn’t seem like the issue that wins Michigan or Wisconsin next year. Sanders hasn’t broadened his appeal since 2016, and Biden is running to be the nominee of a different party from a different era—the Obama era in his own eyes, the ‘70s or ‘80s as his opponents see it.”

“This is a weak field of wonks, phonies, and has-beens. It was a good night for President Trump,” concluded McCarthy.