Democrats Have Found Their Santorum in Sanders 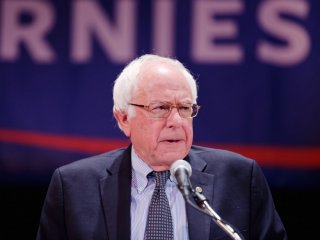 The Democrats have found their Rick Santorum in Bernie Sanders. Neither the socially conservative former senator from Pennsylvania nor the socialist senator from Vermont would welcome this comparison.

But Sanders’s landslide win over Hillary Clinton in New Hampshire sets him up to play a role in the Democratic primaries this year similar to the one Santorum played on the Republican side after a much narrower victory over Mitt Romney in Iowa. (The fact that their respective party establishments tried to shortchange both men in the Iowa caucuses only adds to what they have in common.)

Sanders, like Santorum before him, is a purer alternative to everything that is wrong with his party’s anointed frontrunner. In both cases, the candidate is a purer ideological corrective—an unashamed social democrat versus the triangulating Clintons, an unabashed Christian conservative against a former moderate governor of Massachusetts—who better represents the grassroots. Both of them appealed more to blue-collar voters than their parties’ top candidates.

But each of them was also someone who lacked the presumptive nominee’s defining character flaws.

This last bit is even truer in Sanders’s case. Romney’s character problems were mostly confined to equivocating about public policy issues as he transitioned from Massachusetts to a national Republican primary electorate, although questions about his “vulture capitalism” were certainly serious. Clinton faces doubts about her basic trustworthiness.

How serious are those doubts? In New Hampshire, 34 percent of Democratic primary voters said it was most important that a candidate is honest and trustworthy. That’s eight points more than picked “has the right experience” or “cares about people like me,” an amazing 22 points than “can win in November.”

Those voters who prioritized honesty and trustworthiness supported Sanders over Clinton 91 percent to 5 percent. In a Democratic primary. In a state where Clinton beat Barack Obama in 2008, which her husband carried in two general elections in the 1990s.

Yikes. As it happens, Clinton flunked “cares about people like me” too, losing those voters to Sanders 85 percent to 15 percent. So far, New Hampshire isn’t an anomaly. In Iowa, Sanders beat Clinton among people who wanted an honest and trustworthy candidate 83 percent to 10 percent. Those who wanted a candidate who cared about them voted 74 percent to 22 percent for Sanders over Clinton.

That’s in a state Clinton won. (Give or take a few coin tosses.)

So when Sanders trounced Clinton 60 percent to 38 percent in the New Hampshire primary, it wasn’t just a rejection of Democratic Leadership Council, New Democrat, Goldman Sachs, Third Way centrist politics. Clinton herself has found a way to move left on most issues that would have once left her vulnerable anyway, save a persistently hawkish foreign policy.

The vote for Sanders over Clinton was at least partially a rejection of her personally. Yes, Sanders comes from a neighboring state and built his lead in the Granite State polls even before the email situation worsened. But when idealistic progressives look at the Democratic Party, they want to see Sanders rather than Clinton.

That’s arguably a bigger problem than whether or not you voted for the Iraq war or designed Romneycare. You can at least apologize for and distance yourself from policy mistakes, as Clinton and Romney did in both those cases. You can’t apologize for who your base voters think you are.

The good news for Clinton is that like Santorum vs. Romney, Sanders is unlikely to assemble a diverse enough coalition to actually defeat her. He will probably just make her nomination as difficult and unpleasant as possible, leading to a more drawn out process than originally envisioned.

Clinton will have to worry about losing Ohio to Sanders, just as Romney had to scramble to avoid losing it to Santorum. The Rust Belt will be tough, as will the caucus states where she was famously out-hustled by Obama in 2008. She will inevitably lose other contests. But unless Sanders starts appealing to minority voters, especially African-Americans, in much larger numbers than he has up until now, or the email investigation unambiguously places her in legal jeopardy, she will not lose the nomination.

Sanders’s following is more ardent than Santorum’s or even Clinton’s. But it is more limited than Clinton’s.

The Democratic establishment has a crisis of legitimacy, but it is nowhere near as advanced as the crisis afflicting its Republican counterpart. Clinton lost badly to an avowed socialist. Donald Trump won more votes than Jeb Bush, Marco Rubio and Chris Christie combined. Trump’s margin of victory over runner-up John Kasich is greater than any other candidate’s raw vote total.

So the Republican establishment is in the process of being overthrown while the Democrats’ “revolution” seems to still be in a much earlier phase.

For Clinton there are just two problems. The first is that this is her best case scenario. What if, like Obama’s 2008 Iowa triumph, Sanders’s New Hampshire win alters the Democrats’ sense of the possible and causes them to rethink her inevitability?

Could happen, yes. Likely to happen, no. But the alternative isn’t much more pleasant for her: Santorum’s improbable 2012 strength foretold Romney’s demise in the general election. So might Sanders be a comparable bearer of bad news for Clinton.