Democrats Walk Back Call for ‘Diplomatic Push’ in Ukraine 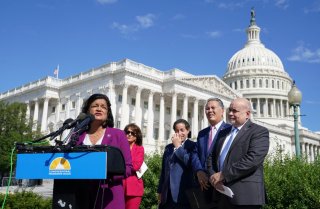 On Monday, thirty members of the Congressional Progressive Caucus (CPC) sent a letter to The White House suggesting that it favored a “diplomatic push” as a part of a larger U.S. strategy in support of Ukraine against Russia’s invasion. The letter caused a massive outcry in the foreign policy world, including from a number of Democratic lawmakers who did not sign the letter. Within twenty-four hours, the CPC had withdrawn its letter. Despite not clearly disowning anything spelled out in the original dispatch, CPC chair Rep. Pramila Jayapal (D-WA) said that it had been “conflated by some as being equivalent to the recent statement by Republican Leader McCarthy threatening an end to aid in Ukraine if Republicans take over,” and that since all members of the Democratic caucus continue to support assistance to Ukraine, the letter had become a “distraction.”

The retraction follows a number of members who signed the letter explaining or walking back their involvement, shortly after the Washington Post reported its existence on Monday evening.

Jayapal first issued a clarification which read, in part “We are united as Democrats in our unequivocal commitment to supporting Ukraine in their fight for their democracy and freedom in the face of the illegal and outrageous Russian invasion, and nothing in the letter advocates for a change in that support.”

Rep. Mark Takano (D-CA) also released a statement essentially distancing himself from the letter. Both Reps. Mark Pocan (D-WI) and Sara Jacobs (D-CA) said that the letter had been written and signed over the summer when circumstances in Ukraine were different and that they did not know why it was released on Monday. Jacobs explicitly said that she would not have signed the letter today. Jayapal’s retraction statement confirmed that the letter had been written months ago.

Before the withdrawal, it appeared as if Rep. Ro Khanna (D-CA) was the only member of Congress to confirm his support for the letter. “Calling for exploring every diplomatic avenue to avoid nuclear war & seek a ceasefire while upholding Ukraine sovereignty is what many constituents seek,” he said on Twitter. “Our nation should never silence or shout down debate.”

The whole kerfuffle is rather confusing. The wording of the letter itself is milder than either supporters or detractors seem to think. It affirmed support for the administration’s ongoing financial and military support for Ukraine; recognized “the difficulties involved in engaging Russia given its outrageous and illegal invasion of Ukraine and its decision to make additional illegal annexations of Ukrainian territory”; and expressed agreement “with the Administration’s perspective that it is not America’s place to pressure Ukraine’s government regarding sovereign decisions, and with the principle you have enunciated that there should be ‘nothing about Ukraine without Ukraine.’” President Joe Biden has himself said that “at some point along the line, there’s going to have to be a negotiated settlement here.”

The Post report framed the latter as “urging President Biden to dramatically shift his strategy on the Ukraine war,” which may have built it up to be more than it was in reality. The banality of the letter, though, does raise the question of why the letter was released in the first place, given that it was sure to generate some level of blowback, and that its very existence suggests that the signatories did have a moderate level of concern over U.S. policy towards Ukraine, at least at the time the letter was written. And given how quickly the signatories retracted the letter—which Jayapal said was released by staff “without vetting”—clearly, it was not a well-thought-out political maneuver.

Nevertheless, the level of animosity that such a milquetoast call for diplomacy received is surprising. The space for debate on Ukraine in Washington is clearly quite narrow. “That the letter was met with fierce opposition is a measure of the space available for debate among congressional Democrats when it comes to support for the war and how it might be stopped before it turns nuclear: roughly zero,” Ryan Grim wrote in The Intercept in an article published before the CPC retraction.

The signatories of the letter would likely agree that the time for diplomacy is not now and believe that to date there appears to be little evidence that Russia is interested in a negotiated settlement. But it is nonetheless essential to keep that door open. Shutting off discussion as soon as the word “diplomacy” is uttered risks squandering the opportunity for negotiations if and when it does emerge.  The letter notes that Ukrainian interests will be central to any eventual settlement. But so long as the United States continues to support with Ukraine with financing and weapons, it too has a stake in the outcome of the war.

It is nothing new for foreign policy discussions in Washington to be limited, especially in times of war. It is fair to critique or question the content or the timing of the letter. It is fair to wonder if diplomacy with Moscow at this point would be impossible or counterproductive. But to dismiss any call for diplomacy as “pro-Putin” or in line with Marjorie Taylor Greene or Donald Trump, and to foster an atmosphere where suggesting alternative policies is not permitted when the war approaches escalation, are unhelpful and dangerous.

The United States should be seeking every possible way to stop Russia’s invasion from becoming a protracted war. Continuing to support Ukraine and punishing Putin for his invasion—as both progressives and Biden have called for—while seeking diplomatic solutions should be possible.