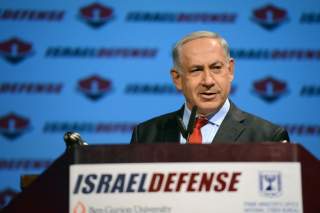 Yet again, a U.S.-brokered effort toward a bilateral Israeli-Palestinian peace agreement has failed, and yet again both parties are resorting to unilateral measures instead. Militarily and economically weaker, the Palestinian Authority (PA) plays its strongest hand by courting greater international legitimacy for Palestine—and thus, greater international pressure on Israel—as rival factions Fatah and Hamas move closer to unity. Israel continues to build in West Bank areas it will probably annex, while considering withdrawal from those it probably will not.

These outcomes are unfortunately predictable and are further indications (attention, Mr. Kerry) that a bilateral agreement is not possible. This sad reality is driven not by ancient hatreds or religious rivalries, but rather by the inexorable logic of the conflict. Simply put, the Palestinians cannot credibly agree to a ‘final status’ peace accord with Israel because it is irrational for them to do so. As a result, Israel will continue to act unilaterally—withdrawing from some territory while taking others—and the Palestinians will respond in kind.

To explain why, consider the following exercise in rationalist thought. First, think of the territory previously known as “Palestine”—between the Jordan River and the Mediterranean Sea—as a “pie.” For both Jews and Arabs, the value of the pie is determined not just by its physical size, but also by the groups’ respective population shares within it.  Thus, the larger the Arab population’s share of the pie, the more it is worth to the Arabs (and the less to the Jews), while the larger the Jewish population’s share, the more it is worth to the Jews (and the less to the Arabs).

Though disheartening to some, this assumption reflects the simple fact that neither side wants to share the pie with the other. Both Arabs and Jews claim ownership of the pie, and both sides’ preferred outcome is having all of the pie to itself.

Finally, think about the decision to formally divide the pie—in other words, to make a final-status peace agreement—as a decision about the desirability of peace versus conflict.

Peace gives each side a slice of the pie, the value of which is determined by the slice’s physical size and each side’s population’s share within it. By contrast, conflict—although certainly costly—leaves open the possibility that one side (the “winner”) can own the entire pie. For each side, then, the desirability of conflict is determined by two factors: first, its valuation of the pie; and second, the probability that it can win the conflict and own the pie outright.

Given their demographic advantage, the Palestinians have more to gain from continuing the conflict than from making peace. Not only is the Palestinian valuation of the pie increasing over time—so too is their probability of winning it. In short order, Israeli Jews will find themselves exercising de facto minority rule over a growing Arab majority, many of which will lack the political and civil rights enjoyed by (both Jewish and Arab) citizens of Israel. Although Israel could weather the resulting international isolation and local unrest, its democracy could not, and the Jewish state would be increasingly exposed to dissolution within a “binational” (i.e. Arab majority) alternative.

As a result, the Palestinians are better off rejecting almost any division of the pie and letting time and demographics grind away at Israel.

The opposite is true for the Israelis. Demographic disadvantage means that the Jewish ‘valuation’ of the pie is decreasing over time—the costs of minority rule (sanctions, security, emigration etc.) will be high and will probably get higher. Meanwhile, demographics prevent a militarily superior Israel from winning the conflict decisively and taking over the entire territory for good. Doing so would make Jewish minority rule inevitable, an outcome we (and Israel) already know is unsustainable. Instead, the Israelis are better off dividing the pie as soon as possible, trading land for a demographic reprieve.

Unfortunately—and despite the costs inflicted by the Israeli occupation—the Palestinians are better off rejecting this division and opting for conflict. As a result, Israel’s best response is to slice off as much of the pie as possible (given the constraints of demography) and mitigate its costs to fighting.

This framework explains Israel’s settlement policy, its construction of the security barrier in the West Bank, and its recent unilateral withdrawals from Arab territory. It also explains why any final status agreement will require the Palestinians to give up on their refugees’ “right of return” to Israel—and why the Palestinians will never agree to do so.

Indeed, given the irrationality of a final-status agreement and the demographic pressures of the occupation, a phased, unilateral withdrawal from heavily populated areas of the West Bank appears to be Israel’s best strategy going forward. The superior strategy of bilateral peace is simply not an option.

Mark Y. Rosenberg is a Director at Eurasia Group and the former Israel/Palestinian analyst territories analyst for Freedom House. He holds a PhD in political science from UC Berkeley.