Denied Again: Kirkuk and the Dream of an Independent Kurdistan 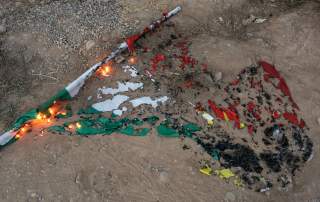 In a closed-door meeting at a Washington think tank in July, I had the opportunity to ask a high-ranking Iraqi Kurdish official whether he worried that Kurds might be overplaying their hands in Iraq and Syria.

I wondered whether regional powers couldn’t reverse the results of the September 25 independence referendum in Iraq’s Kurdistan Regional Government (KRG) and Kurdish gains against ISIS in Syria. As a historian of the twentieth century, I expressed concern that the Kurds, rather than attaining their century-old dream of a national homeland, could be pushed back by their neighbors and international powers as they were in the 1920s, 1946, 1961, 1975, 1988 and 2003.

My interlocutor, whose name frequently came up in recent discussions on the KRG’s independence and Kirkuk, politely dismissed my points and assured me that my worries were unfounded—especially in Iraq. He informed me and the coterie of other Middle East watchers in the room that Iraqi Kurds, now in the 26th year of their autonomy, would peacefully negotiate their independence with the federal government in Baghdad. If things turned violent, Kurds would defend themselves as they always do.

But on October 16, the Kurds’ famed Peshmerga army (literally “those who face death”) didn’t/wouldn’t/couldn’t defend Kirkuk, which Iraqi forces had abandoned in the face of the ISIS onslaught three and a half years ago.

Around midnight, an Iraqi task force composed of regular army units, the federal police, the Counter-Terrorism Service, and the Hashd al-Shaabi militia (Popular Mobilization Units, or PMU) launched an assault to capture the oil fields, airport and the K-1 airbase west of the city. As one observer on Twitter pointed out, in the wee hours of October 16, it looked like the Iraqis aimed to capture only those areas west of Kirkuk, not the city.

But later that morning, reports came in that Peshmerga units loyal to the Patriotic Union of Kurdistan (PUK), one of the two major parties in Iraqi Kurdistan, withdrew from Kirkuk after an agreement with Baghdad. Soon after, Peshmerga forces under the Kurdistan Democratic Party (KDP)—the largest party in the KRG—also withdrew. By late afternoon, Iraqi forces took full control of Kirkuk city and lowered the Kurdistan flag. Depending on how one counts, the fight for Iraq’s disputed oil-rich city took less than a day. Time will tell whether the battle will be called the “The One-Day War” or “The Fifteen-Hour War.”

The only consolation in this mess was that the withdrawal of Peshmerga units and civilians from Kirkuk, a city of some 1.2 million people, kept the death toll at a few dozen—a few dozen too high for the fallen and their loved ones, but nevertheless very low for the modern age.

In many respects, Kirkuk’s recent history reflects that of the modern Middle East. The city boasts overlapping ethnic, religious and political identities where Kurds, Arabs, Turkmens—be they Sunnis or Shia—live alongside non-Muslims and other minorities. Economically, Kirkuk province produces six percent of the world’s crude oil, a major boon to whoever controls it.

These dynamics turned Kirkuk into a bone of contention among different local and regional actors after the creation of Iraq following World War I. At the height of Saddam Hussein’s regime in the 1970s and 1980s, Kirkuk experienced an intense “Arabization” campaign that saw the forced removal of Kurds and Turkmens and the relocation of Arabs from the south.

After the Gulf War ended in 1991, Iraqi Kurds first gained de facto autonomy and then secured de jure autonomy under Iraq’s 2005 constitution—never losing sight of the Kirkuk prize. Under Article 140 of the 2005 constitution, displaced Kurds were supposed to return to Kirkuk and the province had to decide by the end of 2007 whether it would come under KRG rule or remain under federal jurisdiction.

When ISIS partially destroyed the Iraqi state in 2014, Kurds hoped that through negotiations with Baghdad, the Peshmerga’s mettle and the goodwill they accrued in fighting ISIS, they would get to keep Kirkuk in an independent Kurdistan. The One-Day / Fifteen-Hour War in Kirkuk now makes that prospect nigh on impossible.

Kirkuk also proved the curse of oil. Especially with the crash of crude oil prices in 2014, when quite a few Kurds expressed frustration that the KDP and PUK squandered Kurdistan and Iraq’s oil wealth (the KRG is supposed to receive seventeen percent from all Iraqi oil exports). Critics argue that, instead of investing in glitzy shopping malls, residential complexes and hotels, their leaders should have built an export-oriented economy by supporting non-oil industries and investing in modern schools to create a critical mass of entrepreneurs and professionals. (Ironically, many of my own students—promising future entrepreneurs and professionals in Iraq and Kurdistan—often express their hope of moving to Europe or North America, thinking that their life will automatically get better.)

Politically, Kirkuk exposed another oft-repeated theme in modern Kurdish history. In the run-up to the independence referendum, many Iraqi Kurds felt that history was finally on their side and that they would achieve independence. To be sure, the Kurds were aware that they did not possess the heavy weapons that Baghdad had received from Washington to fight ISIS. They were also uneasy about Turkey and Iran’s outright opposition to their independence.

Still, many patriotic Kurds hoped that somehow this time would be different. They believed Israeli support would convince U.S. public opinion, Congress and the Trump administration to back their bid for independence from Iraq. On September 25, of the seventy-three percent of registered voters who participated in the independence referendum, ninety-three percent voted “yes.”

Kirkuk has dashed those hopes and now many Kurds are blaming their leaders for it. They point out how, since the 1990s, the coalition between the KDP and the PUK (which recently lost its legendary leader, Jalal Talabani) has failed its people. Not only has the KRG failed in basic governance (defending borders and fighting corruption), the autonomous region has not been able to build an economy that could support an independent country. Part of the reason is that, as one Kurdish analyst pointed out, the KRG still looks more like a family business than a government run by the people.

A famous Kurdish saying goes, “Kurds have no friends but the mountains.” The fall of Kirkuk proved that, after twenty-six years of autonomy, the two major Kurdish parties have not been good friends to each other and their electorate.

So, what happens now?

On October 17, KRG President Massoud Barzani, who had pushed for the independence referendum despite all warnings for postponement, delivered a speech. Instead of tendering his resignation, as his detractors expected, Barzani advised his people not to lose hope in the dream of an independent Kurdistan. He also indirectly accused the PUK for losing Kirkuk. For its part, the PUK is holding Barzani and the KDP responsible for the Kirkuk fiasco.

While all of this was happening, Peshmerga units and various Kurdish groups were turning over disputed areas such as Sinjar, Gwer, Makhmour, Jalawla and Khanaqin to Iraqi forces—essentially retreating to their 2003 borders. The Guardian’s Middle East correspondent Martin Chulov was spot on when he described the Kurdish withdrawal as “epic strategic losses.”

These failures will likely have two effects—one on the KRG and another on Kurdish politics in the wider Middle East.

The KDP and the PUK will probably linger for a bit, but then they will succumb to popular pressure (or their own incompetence) and either depart the scene or be forced to replace their failed cadres with new names and faces. Failure to secure independence has been bad enough, but should the KRG’s two major political parties also fail to address their people’s expectations for better governance and improved living standards, then the autonomous region, once a coveted island of stability in a troublesome region, might risk becoming another Middle East basket case.

In this context, experienced and competent Kurdish leaders such as Dr. Barham Salih may fill the void and offer a new alternative to Kurds and even Iraq. Salih, a former PUK leader who served as deputy prime minister of Iraq from 2006 until 2009 and prime minister of Iraqi Kurdistan from 2009 until 2012, recently formed a new political movement with a message of enacting wide-ranging reforms and fighting corruption. Salih now may have a much better shot in the next parliamentary and presidential elections in the KRG scheduled for November 1—that is, if the elections are not postponed once again. (Disclaimer: Salih is the founder of the American University of Iraq, Sulaimani, where I work.)

Beyond the KRG, the fall of Kirkuk is likely to have even more dangerous repercussions for Iraq’s neighbors. Young and angry Kurds living in neighboring Syria, Turkey and Iran will offer new recruitment opportunities for armed Kurdish organizations. Given Ankara and Tehran’s determined attempts to crush Iraqi Kurdish aspirations for independence, groups such the Kurdistan Workers Party (PKK), which has been fighting the government of Turkey since 1984 for independence and autonomy, will try to use the frustrations of Kurdish youth to expand their ranks. Iranian Kurdish groups such as Komala, the PKK-affiliated Party for a Free Life in Kurdistan (PEJAK) and the Democratic Party of Iranian Kurdistan (KDPI) are likely to follow a similar course against Tehran. Even the Democratic Union Party (PYD) in Syria, a darling of the West and a menace to ISIS, may see itself dragged into the conflict.