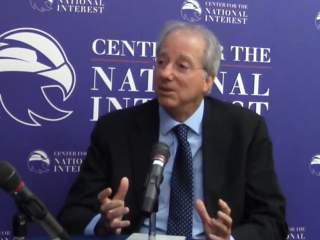 The Middle East has become the cockpit of international relations in the past few years. The rise of the Islamic State, the collapse of Yemen and, above all, the tumult in Syria have upended the region and drawn in outside powers, including Russia. Is there a prospect of a peace in the Middle East? Or is the region doomed to further violence? Are American Jews, especially younger ones, becoming disaffected with Israel or will support for Israel remain a linchpin of American foreign policy?
To answer such questions, National Interest editor Jacob Heilbrunn interviewed the distinguished diplomat and policymaker Dennis Ross. He is the author of a new book called Doomed to Succeed: the U.S.-Israel Relationship from Truman to Obama. Ambassador Ross is counselor and William Davidson Distinguished Fellow at The Washington Institute for Near East Policy. Prior to returning to the Institute in 2011, he served two years as special assistant to President Obama and National Security Council senior director for the Central Region, and a year as special advisor to Secretary of State Hillary Rodham Clinton. He has served four presidents, both Republican and Democratic.
A keen observer and analyst, he conveys neither unbridled optimism nor excessive pessimism about the Middle East. Instead, he draws upon history to demonstrate that the challenges and predicaments the Middle East faces are not entirely new. Most notably, in his National Interest interview, Ross explains why he believes that support for Israel among American Jews is unlikely to attenuate in the future.