Designing a Navy for the Twenty-First Century 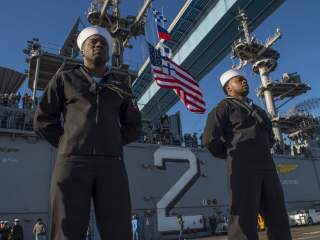 So Admiral John Richardson, the chief of naval operations (CNO), a.k.a. the United States’ top uniformed naval officer, plans to unfurl a “campaign design” next month to guide the U.S. Navy’s future endeavors. We know very little about the draft document. Nevertheless, it’s worthwhile proffering a few thoughts in this largely fact-free setting—even while the draft remains under strict embargo.

Some ideas animating the directive have begun to seep out of the Navy Staff. For one, the world is changing around the sea services—the U.S. Navy, Marine Corps and Coast Guard—at a fast and quickening rate. While the U.S. Navy remains tops in knowledge and capability—the human and material sinews of sea power—for now, prospective antagonists are improving even more swiftly. They’re coming from behind.

To visualize this way of thinking, imagine plotting two curves. One’s tracking above the other on the y-axis but sloping upward more gradually. That means the margin between the two curves—the margin of relative maritime might, in other words—is steadily diminishing. The curves will cross at some point if the gradients remain constant—and the U.S. Navy’s surplus of combat power will become a deficit. The CNO wants to steepen the navy’s curve—keeping the curves from ever intersecting, and thus perpetuating the American margin of superiority indefinitely.

For another, the navy must accomplish all of this with resources that are more or less stagnant. As Admiral J. C. Wylie once observed, Congress makes strategic decisions through the budgetary process—and lawmakers have capped the taxpayer dollars earmarked for defense. The upshot is that the sea services must bolster their knowledge and capability, and thus their combat punch, within current fiscal restraints.

The corollary is that education is central to employing existing widgets or those already in the pipeline imaginatively. If material capability is largely fixed, knowledge constitutes the core of this enterprise. Seafarers acquainted with the best that is known and thought in the world, that is, stand the best chance of repurposing hulls, airframes and munitions for circumstances changing at helter-skelter speed.

Which leads to the few specifics that have come forth, mostly relating to the human dimension of seaborne exploits. In recent weeks Admiral Richardson has started urging those who transact business in great waters to hone four “core attributes” meant to augment the navy’s longstanding “core values,” namely honor, courage and commitment. Integrity, accountability, initiative and toughness comprise the core attributes.

Together, maintains the CNO, these attributes foster mutual confidence within an institution. Senior leaders who are confident that subordinates will do the right thing, be self-critical and humble, seize the initiative when opportunity beckons, and cope with the slings and arrows intrinsic to warfare can turn those subordinates loose—and unlock their creative potential in the process. An institution rife with micromanagement is sclerotic. A tough, enterprising, accountable institution is an innovative institution.

Three thoughts about all of this. One, a linguistic quibble that may reveal something deeper. Values and attributes are rather superficial, neutral, changeable characteristics that typify individuals and institutions. Give me the classical language of virtue instead. (The core bit seems to acknowledge this problem.) Virtue is fundamental, and enduring. For Greek philosopher Aristotle, for instance, virtue was about nurturing healthy habits of thought, feeling, or deed. It was about finding the golden mean between an excess and a deficiency of some trait—justice, temperance and bravery being three. Aristotle offers a rich way to build a culture, supplying something that lists of qualities lack.

Think about martial valor, or bravery, the counterpart to the U.S. Navy’s core value of courage. Aristotle would implore mariners to strike the right balance between the excess, namely mindless indifference to danger, and the corresponding deficiency, namely cowardice or paralysis amid the perils of combat. Aristotelian valor isn’t just fundamental to the warrior ethos, then; it demands constant mindfulness and maintenance from military practitioners. To be brave, think about and cultivate bravery. The same goes for other virtues, such as honor—a vast topic in itself—or commitment, or any other trait you care to catalogue.

If you prefer, look to pop culture for wisdom. Virtue is something you grok in your gut, not a chore to be completed. For Midshipman Hollom, the well-intentioned but feckless officer in Master and Commander, nautical leadership amounts to a laundry list of leadership traits. “Strength, respect, and discipline,” mumbles Hollom by rote when Captain Jack Aubrey—an exemplar of martial virtue—tries to teach the midshipman how to earn the respect of seamen on board HMS Surprise. The classical approach to virtue could help big organizations avoid their natural bureaucratic tendency to boil complex things down to checklists and routines.

Or take Rome. One doubts Maximus Decimus Meridius was thinking about attributes or values when he exhorted Roman soldiers to show strength and honor! in battle. (No, this isn’t an authentic translation of a Roman army slogan, but it’s Roman in character nonetheless.) He was thinking about virtue. To bring the discussion from Hollywood back to the real world, Marcus Aurelius—the real-life version of the fictional Maximus’ emperor—wrote a book of meditations refining the Stoic virtues formulated in ancient Greece. Classical antiquity, in short, is worth revisiting as the services confront an uncertain future.

Two, initiative—a virtue straddling the difference between passive inaction and devil-may-care experimentation—certainly belongs at the center of sea-service culture. It’s a deep and abiding trait that bids mariners improvise and improve on what is. It helps institutions adapt to change or, better yet, shape their surroundings to their advantage and their foes’ detriment.

Florentine official and philosopher Niccolò Machiavelli, another student of Roman history, maintains that keeping in tune with changing times is the crucial act of statecraft for rulers and commanders. Flexibility is a key advantage for republics over authoritarian societies according to Machiavelli.

Initiative, then, is a virtue the sea-service leadership must nourish to compete effectively with the likes of China and Russia. And indeed, vaulting from Renaissance Italy to twentieth-century America, U.S. Air Force colonel John Boyd insists that nimble competitors don’t just keep up with but also mold the times—hitting rivals with “fast transients” that bewilder them at times of extreme stress. Let’s turn our open society’s features to advantage.

And three, toughness sounds like motherhood and apple pie for military services. Of course we want to be tough! Far better to be able to withstand damage and fight on than to shatter at the first sharp rap. But it may be possible to go beyond mere toughness. The author Nassim Nicholas Taleb explains that resiliency—a close cousin if not a synonym for toughness—isn’t the opposite of fragility.

Taleb coins the neologism antifragile to describe his notion that it’s possible to configure organizations and societies to benefit from—rather than simply tolerate—shocks to the system. An institution that’s antifragile doesn’t just absorb unexpected setbacks and continue functioning. It absorbs the shock while using setbacks as feedback on the institution’s performance in turbulent times. Revisions to methods and organization follow. Performance improves.

Virtuous, flexible, adaptive: sounds like a force equipped to execute any campaign design.