Despite Risks, Biden Sticks to Military Exit from Afghanistan 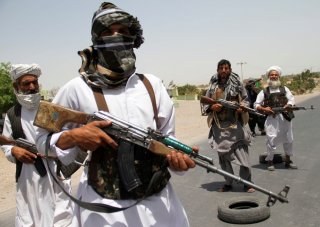 The U.S. military withdrawal from Afghanistan is progressing ahead of schedule and should conclude by the end of August. On July 12, General Austin Scott Miller stepped down as the commander of United States Forces-Afghanistan (USFOR-A) and Operation Resolute Support, marking a symbolic end to the military mission in Afghanistan. While President Joe Biden argues that “speed is safety” within the context of the troop drawdown, others are concerned that the rapid pace will result in unintended consequences and increased risk to U.S. interests in Afghanistan.

Such concerns are well-founded as the intra-Afghan peace talks are making little if any progress. This is because the Taliban is aggressively pressing its military advantage across the country, reportedly controlling over 200 districts and seizing key border crossings with Tajikistan and Iran. These developments led Biden to conclude that the Taliban “is at its strongest militarily since 2001.” Given the current trends, the Taliban has little incentive to negotiate with President Ashraf Ghani’s administration and appears content to wait until U.S. and coalition troops complete the retrograde before fully advancing their agenda and influence along multiple fronts. The Taliban will also declare victory over the superpower to cast further doubt about the Afghan government’s ability to secure the country. In sum, the dire predictions expressed by scholars, military veterans and their civilian counterparts, and serious observers of the Afghan conflict are coming to pass.

Nevertheless, Biden made the correct decision when one considers competing national interests, the costs of continuing military operations with little tangible progress in return, and public apathy. As the “war on terror” recedes from the national conscience and is replaced by strategic competition with China and other security challenges, he determined that maintaining the status quo in Afghanistan “was not an option.” Biden’s cost-benefit calculation places national security interests above other considerations such as nation-building, while public weariness and polling data favor ending America’s “longest war,” despite the risks.

With the military drawdown more than 95 percent complete, Biden made clear that the responsibility to decide the future of the country now lies with the Afghan people. While encouraging the Afghan government and leadership to come together in this time of extreme national crisis, he also questions whether they have the will to do so. Biden’s skepticism is warranted and while predictions that the government could collapse in as soon as six months are alarming, they are also unsurprising given a resurgent and emboldened Taliban, continued political infighting, and rampant corruption.

As Jonathan Allen notes, there was “no good way to leave” Afghanistan, but leave we will. That said, allegations of “abandonment” ring a bit hollow after two decades of U.S. expenditure of blood and treasure—over 2,300 American troops killed in action, another 20,000 wounded, and an estimated $2.26 trillion in war costs—to help create a stable and prosperous Afghanistan. To be clear, Washington can be (and has been) criticized for its hubris and inconsistent commitment to Afghanistan over the years. Examples across successive administrations include George W. Bush’s naive ambitions for a strong central government in a historically tribal country and the 2003 U.S. invasion of Iraq that shifted the strategic focus and resources away from Afghanistan; Barack Obama’s 2009 announcement of a “surge” of 100,000 U.S. troops that also included an eighteen-month deadline to begin a withdrawal of these forces; and Donald Trump’s renewed commitment to a conditions-based strategy before entering into a peace agreement with the Taliban (and excluded the Afghan government), even though conditions within the country remained unchanged.

Upon assuming office, Biden had to determine whether to continue the withdrawal of military forces from Afghanistan agreed by his predecessor. His recent remarks on the subject were illuminating; specifically, his recollection that “in 2011 the NATO Allies and partners agreed that we would end our combat mission in 2014. In 2014, some argued, ‘One more year.’ So we kept fighting, and we kept taking casualties. In 2015, the same. And on and on…Nearly 20 years of experience has shown us that the current security situation only confirms that ‘just one more year’ of fighting in Afghanistan is not a solution but a recipe for being there indefinitely.”

By continuing the drawdown, Biden accepts the risks and will own the consequences. That said, I’ve previously written that he deserves credit for “breaking the cycle” by overruling senior military officials and remaining committed to the retrograde timeline despite the possibility of a Taliban takeover that could allow Afghanistan to reemerge as a safe haven for terrorists. As justification, he argues that the United States has not only achieved its objectives, but the “job had been over for some time” and military withdrawal is “overdue.”

While this logic will not satisfy his critics, Biden has been consistent regarding the limitations of military force in Afghanistan. For example, during deliberations regarding the aforementioned surge, then-Vice President Biden was viewed as an outlier who recommended a narrow “counterterrorism plus” policy, as opposed to the large-scale counterinsurgency approach advocated by Secretary of Defense Robert Gates, CENTCOM Commander General David Petraeus, Secretary of State Hillary Clinton, and others.

Unfortunately, Biden’s decision to withdraw U.S. military forces will likely undo much of the progress that Afghanistan has achieved over the years. Despite attempts to appear moderate, the Taliban’s actions tell a much different tale. For example, their fighters reportedly executed twenty-two Afghan commandos as they tried to surrender. Such barbaric actions do not bode well for the advancement of human rights, education, and women empowerment efforts in Afghanistan going forward. George W. Bush offered a rare criticism of his successor, warning that “Afghan women and girls are going to suffer unspeakable harm. This is a mistake. ... They’re just going to be left behind to be slaughtered by these very brutal people, and it breaks my heart.”

To prevent such a tragedy, some are calling for retaining a modest and tailored U.S. military force in Afghanistan to continue counterterrorism operations and prevent a Taliban takeover of the country. They look at the small number of American casualties over the last eighteen months and argue the cost of a residual military presence is minimal. But this overlooks the fact that the Taliban has (thus far) adhered to the peace agreement and refrained from attacking American and coalition forces during the retrograde. An enduring military presence would violate the terms of the agreement and allow the Taliban to resume attacks against a smaller U.S. military footprint, resulting in casualties and increasing the risk of military escalation. This is the cycle that Biden is determined to break.

He is instead relying on the 300,000 Afghan National Army troops that are “well-equipped – as well-equipped as any army in the world” and supported by an emerging Afghan Air Force. Given their underwhelming performance in recent months, his faith in their capability seems misplaced and wildly optimistic. In fact, the Taliban’s military success and momentum have motivated the Afghan government to recruit and mobilize militias to help fill the security void.

Reports of the demoralized state of Afghan military units and outposts surrendering to the Taliban reflect poorly upon longstanding efforts to build capacity to defend the country without U.S. and coalition support. Moreover, the retrograde includes the withdrawal of all defense contractors that provide critical support operations including the maintenance and sustainment of critical Afghan military equipment such as aircraft and vehicles. This presents a significant logistical challenge for Afghan security forces as their fight against the Taliban intensifies.

General Miller warned that “civil war is certainly on a path that can be visualized on the trajectory that it’s on” and the current situation is reminiscent of the early 1990s after the withdrawal of Soviet military troops and cessation of foreign assistance to the government in Kabul. A brutal civil war ensued that culminated with the Taliban’s rise to power in 1996. Trying to avoid a similar calamity, Biden has pledged an enduring commitment to Afghanistan using non-military tools. Specifically, Ambassador Zalmay Khalilzad has been directed to “hypercharge“ diplomacy efforts in Afghanistan and the region to broker a political solution to the conflict. The administration will also continue to provide funding for reconstruction, medical assistance, economic development, and other initiatives. Meanwhile, the Pentagon will provide equipment and additional resources for Afghan security forces, although training will reportedly occur outside the country.

To mitigate risk, CENTCOM is working through the tactical and logistical challenges of providing over-the-horizon support and regional power projection, while likely planning for an array of contingencies including a potential Noncombatant Evacuation Operation (NEO) for the U.S. embassy in Kabul that includes the 650 remaining troops to protect the diplomatic presence. Unfortunately, the combination of departing U.S. forces and sweeping Taliban gains against Afghan security forces has significantly disrupted intelligence collection efforts that are crucial for such operations. General Frank McKenzie, the CENTCOM Commander, recently lamented that “my knowledge of what’s going in Afghanistan is not nearly what it was 180 days ago” and will likely continue to decrease in the future.

Despite these shortcomings and limitations, Biden made the appropriate—if difficult—decision to withdraw U.S. troops under the logic that “we’ll be much more formidable to our adversaries and competitors over the long term if we fight the battles for the next 20 years, not the last 20.” While the United States may have achieved its objectives, he also said this is no “mission accomplished” moment and his administration should continue (if not expand) its commitment to the Afghan government using non-military levers of power while harboring no illusions that this alone will bring stability to a country that has endured continuous conflict for five decades. U.S. military involvement is quickly coming to an end—too quickly for some—but the war in Afghanistan will go on.