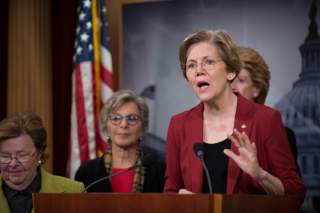 Conservatives frustrated with Ronald Reagan used to exhort moderates inside his administration to “let Reagan be Reagan.” During the Gipper’s second term, one bitterly disillusioned conservative columnist made this mordant suggestion: “Let’s give someone else a chance to be Reagan. The incumbent obviously doesn’t know how to do it.”

That’s where some liberals now find themselves with Barack Obama. We are the ones that we’ve been waiting for, he vowed. Well, let’s give someone else a chance to be the ones. If they feel that way about Obama, it surely applies doubly to the Democrat they spurned to put the incumbent in the White House: 2016 front-runner Hillary Clinton.

The number one replacement candidate is Massachusetts Democratic Sen. Elizabeth Warren. She is beloved by Occupy Wall Street, admired by progressives concerned about income inequality and the wealth gap.

Originally destined to run the Consumer Financial Protection Bureau, Obama never thought he could get her confirmed by the Senate. So she had to settle for becoming a member of that body instead, in Ted Kennedy’s seat no less.

Warren satisfies two important requirements for running against Hillary Clinton. One, she speaks to the main concerns many liberals have about both Clintons: their coziness with Wall Street and liberal hawks. (Not coincidentally, these are two features that distinguished “New Democrats” from the old variety in the 1990s.) Second, she would dampen enthusiasm for Hillary as the first woman president, since she too could break that glass ceiling.

Liberal discontent with the Clinton’s corporate-friendliness smoldered throughout the showdowns with Newt Gingrich, the government shutdown, the 1996 reelection campaign and the impeachment saga. It first manifested itself in Ralph Nader winning nearly 3 percent of the popular vote in 2000, flipping Florida and the presidency to George W. Bush.

Eight years later, Obama gave liberals an option for voicing their disdain for the Clintons’ Goldman Sachs politics without putting a Republican in the White House. This time around, Elizabeth Warren clearly fits that bill.

The number one issue that doomed Hillary, however, was her vote for the Iraq war. It was one thing to support Kosovo, as all but a few principled Dennis Kucinich types within the Democratic Party did. Supporting Bush’s Iraq invasion was like a liberal Democrat still favoring the Vietnam War during the Nixon administration.

Warren, like Obama, never supported the Iraq war. Nor was she a major voice for military intervention within the Obama administration, as by all accounts Clinton was during her tenure as secretary of state. The Massachusetts senator has instead pushed for restraint in dealing with Iran and repealing the Iraq authorization of force.

Iraq remains in the news due to the country’s deteriorating conditions. The possibility of reinserting troops or conducting air strikes certainly exists (Clinton favored keeping a residual force after 2011). Other hot spots from Iran to Syria are still potential targets of military intervention.

But liberal antiwar passions have cooled somewhat and Democrats have become at least marginally more hawkish with one of their own as command-in-chief. It’s unclear how far Warren could ride Hillary’s Iraq war vote in 2016.

There are other important differences between Warren and Obama. Warren can be eloquent in discussing the middle-class economic anxieties, bankers avoiding accountability for the financial crisis and what corporations and the rich owe the rest of society. Remarks of hers that were widely circulated on the Internet were even the likely inspiration for “You didn’t build that!”

Warren isn’t in Obama’s league as an orator, however. It is easy to forget after more than five years of listening to the president drone on at press conferences how much of his appeal was derived from successful major speeches. From his debut at the 2004 Democratic National Convention to his comments extricating himself from the Jeremiah Wright controversy, Obama demonstrated a capacity to move people with words that Warren has not.

It’s to say whether Warren is in Obama’s league as a politician, since the fight with Mitt Romney was the latter’s most competitive general election. While Warren’s win over Republican Sen. Scott Brown was impressive, it looks rather less so when you take into account that Massachusetts is a liberal state and Obama was also on the ballot. She lost independents, whites and men to Brown.

Obama, as the first viable African-American presidential candidate, was able to pry the black vote away from Clinton. He did not just appeal to the voters who would have cast primary ballots for Gary Hart, Bill Bradley or Howard Dean (and for that matter, Elizabeth Warren). He combined young and affluent white liberals with a supermajority of the black vote, the coalition Clintonite Paul Begala derisively referred to as “eggheads and African-Americans.”

It is unlikely that Warren could count on anything approaching that level of black support. Without it, her coalition is smaller than Clinton’s. And even with it, Obama’s popular vote margin over Hillary wasn’t huge.

The fact that Clinton lost when everyone expected her to win has made many people conclude that what Obama did by beating her was easy. It was not. The final nail in the Warren-for-president boom’s coffin is that she does not appear to be laying the groundwork for the Herculean task of upsetting the presumptive Democratic front-runner, in no small part because she has repeatedly said she has no plans to run.

If Elizabeth Warren is the one we’ve been waiting for, we’ll have to keep waiting.