To Deter Iran, Give War a Chance 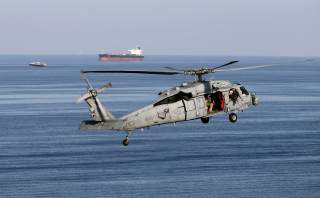 In April, Iran’s theocratic rulers vowed to disrupt shipping in the vitally important Persian Gulf. Last week, they made good on that promise, attacking two oil tankers owned by U.S. treaty allies Japan and Norway. And now the regime is vowing to stockpile enriched uranium in its latest act of nuclear blackmail.

Tehran is counting on its long record of getting away with attacks on the free world. But sooner or later we must draw a line and give war a chance against the government that has always seen itself as being at war with us.

The coordinated attacks on the oil tankers are only the latest in a long line of Iranian military actions, both directly and through proxies it controls. In early May, Tehran attacked four commercial ships. A few days later, its surrogates launched a rocket at the U.S. embassy in Baghdad and, according to Secretary of State Mike Pompeo, mounted an attack in Afghanistan that wounded four U.S. soldiers. The Iranians also fired on a U.S. drone.

This fits a pattern that dates to the earliest days of the Islamic Republic, which came to power in 1979 while taking U.S. diplomats hostage in contravention of the most basic tenets of international law and decency. Tehran’s surrogates blew up the Marine Barracks in Lebanon in 1983, attacked the U.S. embassy, and kidnapped Americans throughout Beirut later that decade, torturing and killing some. (They did the same to Soviet diplomats until Moscow responded by shooting and castrating the relative of a Hezbollah militant in 1985, and sending him his relative’s body parts, after which Moscow had no more problems.)

In 1996, Iranian proxies blew up the Khobar Towers barracks in Saudi Arabia, killing scores of Americans. Since then, Iran has been responsible for the deaths of perhaps more than one thousand Americans in Iraq. Tehran took British sailors hostage in 2007, and did the same with U.S. sailors in 2016—putting them on humiliating display in both instances in violation of the law of war. The country effectively maintains two proxy armies on Israel’s borders—Hamas in the south and Hezbollah in the north—and they frequently attack the Jewish state. Tehran is also fighting a war using its Houthi puppets against U.S. partners Saudi Arabia and the United Arab Emirates. This war has included Iranian-provided missiles fired at the Saudi capital, drones attacking Saudi targets, and the bombing of a regional airport.

Tehran has gotten away with too much for too long, and its recent actions strike directly at U.S. economic interests. While America is now a net exporter of oil, we still import a lot of oil grades to produce refined petroleum products that we use domestically and export. Put simply, both the U.S. and global economy still depend on Middle Eastern oil.

But as usual, the same “expert” voices in Washington and allied capitals are counseling what amounts to inaction. At the most, they would accept a U.S.-led mission to escort tankers in the Persian Gulf. That would basically let Iran off the hook and would tie down U.S. naval, air, and other military assets that we should be trying to free up to deter China in the Indo-Pacific region.

Typically, these voices question whether Iran’s aggressive acts were sanctioned by the top levels of its government, or were rogue operations. They also suggest that moderates in the regime are poised to gain the upper hand and would be undermined by allied military action. Yet anyone who looks back at the forty years of misconduct of the Islamic Republic, and the fact that hardline Islamists have always had the final say on Iran’s policy, should see these arguments are silly. Tehran’s nuclear blackmail is also clearly directed by the regime’s leaders and is clearly being synchronized with its other offensive acts.

Tehran also benefits from disgust over the incompetence with which America and our allies conducted the wars in Iraq and Afghanistan, which still ensnare us after the better part of two decades. Another tale of woe is Libya, where NATO-assisted regime change in 2011 opened the door to chaos and mass emigration. Only now after eight years are secular forces under Gen. Khalifa Haftar gaining the upper hand to secure Libya from Islamists and jihadists. Who would want more of this mayhem?

But military action against Tehran needn’t be anything like Iraq, Afghanistan, or Libya. There would be no pretense of nation building or making the world safe for democracy. It would be a limited, punitive strike to deter future aggression and blackmail. We could use our considerable advantage in naval and air power to retaliate against Iran’s maritime attacks by degrading its maritime capabilities, especially its navy and port facilities. Doing so would finally signal to Tehran that we have had enough. The United States and our allies could also maintain escalation dominance by making clear to Iran that key parts of its economy and political identity, including its shipping, refineries, and nuclear facilities, would be held at risk if it continued its military aggression or nuclear blackmail.

President Donald Trump warned Iran last month, tweeting “If Iran wants to fight, that will be the official end of Iran. Never threaten the United States again.” Iran has responded with several attacks designed to afford it minimal deniability, believing that America and our allies will once again react with only words and minimal, purely defensive gestures.

It’s time to follow through on our promises to react. Either we put the Islamic Republic of Iran back in a box, or we will in effect encourage it to do what it has done since its birth—wage war throughout the Middle East and kill Americans.

Christian Whiton was a senior advisor in the Donald Trump and George W. Bush administrations. He is the author of Smart Power: Between Diplomacy and War and a senior fellow at the Center for the National Interest.