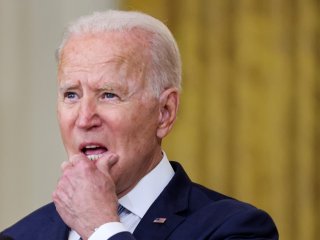 On July 8 President Joe Biden declared, "There’s going to be no circumstance where you see people being lifted off the roof of a embassy in the—of the United States from Afghanistan....The likelihood there’s going to be the Taliban overrunning everything and owning the whole country is highly unlikely." Well. A few weeks later and it looks like the Taliban do indeed own, or at least control, the whole country as America scrambles to extricate its remaining embassy personnel along with its interpreters from Kabul.

Is it Biden’s fault? Writing in the Washington Post, Max Boot says you bet it is. According to Boot, “This is the worst U.S. foreign policy failure since the fall of Saigon in 1975—worse even than the fall of Mosul, Iraq, in 2014 to the Islamic State, another disaster that might have been averted by keeping a small U.S. troop presence in Iraq.” Boot contends that Biden did not have to abide by the deal that Donald Trump signed with the Taliban. There was no cogent reason to withdraw American troops, which amounted to a paltry 2,500. A stalemate would have prevailed.

This is, in essence, the argument that the military chiefs, including General Mark Milley and Defense Secretary Lloyd Austin, made to Biden. He was told that the Taliban would prevail absent American forces. Biden overruled the generals. He was not about to continue hoisting the gonfalon of intervention in Afghanistan.

What surprised the Biden administration was not that the Taliban are on the march but that they are marching with such rapidity. Biden wanted a decent interval. He did not get it. Instead, the interval turned out to be a nanosecond. The result is that the Administration was caught flatfooted—and is struggling to explain why.

It is now clear that there was no Afghan state, no government, no military. These were convenient fictions, phantasms, if you will, that were invoked by successive administrations to justify America’s presence as an occupying power. But no sooner did Biden pullout than the entire Potemkin village came crashing down.

The record of the American intelligence services, particularly the CIA, led by William J. Burns, will come under particular scrutiny. If the estimates of the CIA were overly optimistic, what does that say about the reliability of its estimates about potential terror attacks against America that might emanate from Afghanistan? The role of special envoy Zalmay Khalilzad, who has argued that the Taliban have changed since the dark days of the 1990s, is also bound to attract attention in any future autopsies of this debacle. Speaking in early August at the Aspen security forum, he said, “The Taliban wants to be recognized. They say they do not want to be a pariah state. They have their own reasons to seek normalcy with the rest of the world. Are they going to do what it takes? That's where the leverage comes in.” Was he undercut by Biden? Or was his assessment far-fetched?

Whether Biden will pay a political price for exiting Afghanistan is questionable. In the short term, a war weary public that is more concerned about COVID-19 than conflicts abroad may even applaud his iron determination to cauterize the suppurating Afghan wound that has afflicted American foreign policy for several decades. But whether that judgment will hold over the next year is an open question.

Republicans such as Senate minority leader Mitch McConnell will seek to transform the midterm elections into a referendum on who lost Afghanistan. Former Secretary of State Mike Pompeo derided on “Fox News Sunday” what he deemed Biden’s “pathetic blame-shifting” and “weak American leadership” that was more fixated with critical race theory than protecting the U.S. embassy. A terrorist attack in America or another setback abroad might revive memories of the successive defeats America experienced in the 1970s, as the Soviet Union marched ahead in the Third World. Make no mistake: in boldly acknowledging that America lost the war in Afghanistan, Biden runs the risk of looking like a loser.