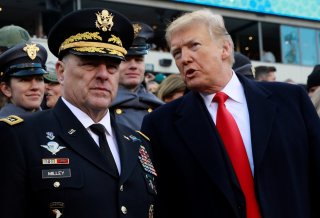 General Mark Milley, the chairman of the Joint Chiefs of Staff, reportedly told Chinese General Li Zuocheng that he would notify the Chinese beforehand if then-President Donald Trump planned to launch a nuclear strike on China. Milley must address these claims and the damage the call may have done to national security when he testifies before the Senate Armed Services Committee on September 28.

“General Li, you and I have known each other for now five years. If we’re going to attack, I’m going to call you ahead of time. It’s not going to be a surprise,” the Washington Post’s Bob Woodward and Robert Costa quoted Milley as having said in their new book Peril.

Milley then reportedly told top military officers that they should only carry out orders for a nuclear strike from him and not from the president of the United States. The damage from the call could go deeper than just gross insubordination.

U.S. Strategic Command (STRATCOM) commander Adm. Charles Richard noted last Monday during a “fireside chat” with senators Angus King and Deb Fischer that adopting a “No-First Use” policy on nuclear weapons could leave the United States vulnerable to a Chinese or Russian nuclear first strike. Telling China’s top general that he would subvert the president of the United States could have the exact same impact.

This summer, China threatened Japan with nuclear annihilation if it decided to defend Taiwan. It is highly doubtful the Chinese would have made this unprecedented statement if it feared American nuclear retaliation or an American first nuclear strike.

A poker bluff has always been a key aspect of American nuclear deterrence. Milley’s decision to reassure the Chinese has surely given them the idea they can use the chairman of the Joint Chiefs how and when they want to for intelligence purposes. This seriously undermines American deterrence. If China thinks it can get favors from Milley, it will no doubt use every means available to manipulate the general and influence U.S. foreign policy.

Were there any communications between Milley and the Chinese over abandoning the strategically advantageous Bagram airbase? Reports now indicate that China has a strong interest in occupying the now-abandoned base.

Whatever his feelings about the former president are, it shows that Milley is an officer who doesn’t respect the chain of command. Having a top general who is willing to turn to the nation’s main adversary without authorization is unprecedented.

China has a vast intelligence network that has infiltrated militaries around the world. Cultivating an intelligence asset requires knowing that person’s weaknesses. Those who know Milley say he’s arrogant and thinks he knows everything. Former KGB officer Stanislav Levchenko, who headed the KGB’s active measures office in Tokyo in the 1970s, noted that the Soviet intelligence agency used “ego problems” to convert high-level political targets in Japan’s inner circle. Such tactics are used by Chinese intelligence agencies.

Milley’s vanity makes him a prime target for Li and Chinese intelligence to exercise further influence. If the reports are true, then Milley showed that he is vulnerable to Chinese manipulation. Would he inform the Chinese about President Joe Biden’s actions toward China if he disagreed with the president’s course of action?

In The Art of War, Sun-Tzu declares that “Hence to fight and conquer in all your battles is not supreme excellence; supreme excellence consists in breaking the enemy's resistance without fighting.” China’s number one strategy has been finding ways to employ this lesson. Having the chairman of the Joint Chiefs of Staff in the People’s Liberation Army’s pocket certainly would be one way to break the enemy’s resistance without fighting.

It also raises questions about what else Milley might have told America’s top adversary, particularly regarding U.S. postures toward Taiwan and the South China Sea. Much more needs to be known about Milley’s relationship with China and the degree to which he may have been compromised.

Li notably vowed last year to smash Taiwan. “If the possibility for peaceful reunification is lost, the People’s Liberation Army will, with the whole nation – including the people of Taiwan – take all necessary steps to resolutely smash any separatist plots or actions,” Li said.

Milley claims that China lacks the ability to take Taiwan, but he also said in July that Afghanistan’s military could defend the country from the Taliban. Is he being fed disinformation? Just last month reports showed that China is looking at using auto ferries to transport troops to Taiwan to compensate for its lack of naval transports.

How can the nation trust its top commander to give the full and unvarnished truth even when the situation is downright ugly?

The Chinese are showing their aggressiveness with their own maneuvers inside the U.S. Exclusive Economic Zone (EEZ) off the Aleutian Islands. The U.S. Coast Guard intercepted several Chinese destroyers and a surveillance ship. It marks the first time that China attempted such a probe of American defenses near Alaska since Barack Obama was president in 2015.

China likely believes the United States will do nothing as long as Biden is president and Milley is chairman of the Joint Chiefs.

China is certainly also laughing at Milley’s woke comments on white rage and his support for Critical Race Theory in the military, which undermines unit cohesion and the ability of the American military to resist aggression. That’s not even including the low morale due to the defeat in Afghanistan, the stand down last spring, and the vaccine mandates.

Milley needs to step aside and face discipline because his continued presence as the nation’s top military officer is a clear and present danger to national security on multiple levels.

Biden should consider an officer such as Adm. Richard to replace Milley. The United States needs a competent strategist who comprehends the need to deter China and Russia and knows how to do so.

Richard has been at the forefront of calling for stronger deterrents against Chinese and Russian nuclear modernization as well as China’s lack of treaty constraints and uncontrolled nuclear buildup. America needs a focused strategist in the top job, not a self-interested political hack.