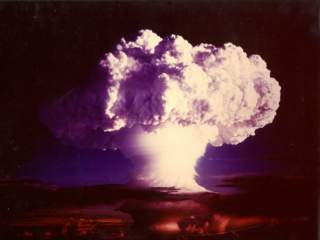 North Korea claims to have detonated a thermonuclear—or hydrogen—bomb near its nuclear test site at Punggye-ri on January 6. But there are reasons to doubt at least one part of Pyongyang’s boast.

Not totally disbelieve. But doubt.

We do know something caused a 5.1 magnitude seismic event near the site, and humans were responsible. It was most likely a nuclear weapon. . . a test. Pyongyang certainly claims so. But whether North Korea exploded a hydrogen bomb is uncertain.

“While we cannot confirm these claims at this time, we condemn any violation of U.N. Security Council Resolutions and again call on North Korea to abide by its international obligations and commitments,” a U.S. State Department spokesperson stated in a press release.

The reasons for the uncertainty have to do with the estimated yield, seismic waves generated by the test and the technical complexity of building a hydrogen bomb.

North Korea as a matter of course exaggerates its military and technological accomplishments, but has tested at least two previous atomic bombs, which work by provoking a compacted ball of nuclear material into undergoing an explosive chain reaction.

These are considerably more complicated to build than fission bombs, as they require two stages, and the governments which have them keep their precise mechanisms highly secret.

Whatever happened, the device appeared to have emitted a similar yield to previous North Korean tests, which means it might have been a single-stage repeat. Another possibility is a hydrogen bomb that fizzled. Or it could have been a rare, unusually low-yield thermonuclear device.

And there are other variables such as the test’s depth which could change estimations of the bomb’s yield. In short, we don’t know.

Another possibility, which several experts have introduced, is that North Korea could have detonated a “boosted” device made by adding tritium—a radioactive form of hydrogen—to a single-stage fission bomb.

As nuclear weapons expert Jeffrey Lewis pointed out in December—referencing a report from the Institute for Science and International Security—North Korea may have constructed facilities at its Yongbyon nuclear complex consistent with tritium production.

Tritium would—again in a very simplified explanation—make a fission bomb more energetic by boosting the amount of fissile material which undergoes a chain reaction. In a normal fission bomb, not all of it does. This creates a bigger explosion, albeit one that’s still far smaller than a thermonuclear-level bang.

Of course, tritium production would also be consistent with North Korean plans to build a hydrogen bomb.

In any case, the United States and its allies have ways to find out. The North Korean test chamber could vent isotopes into the atmosphere, which U.S. Air Force WC-135 Constant Phoenix planes—one of them possibly based in Okinawa—can then sniff for telltale signs of a hydrogen detonation.

The WC-135s regularly operates these “Glass Titan” missions from Offutt Air Force Base in Nebraska, Kadena Air Base in Okinawa and Eielson Air Force Base in Alaska, according to an Air Combat Command document we received through the Freedom of Information Act.

The Comprehensive Nuclear Test Ban Treaty Organization also monitors traces of nuclear explosions with a global network of radionuclide monitoring stations. We should soon find out.

Robert Beckhusen is the managing editor of War is Boring, where this article first appeared. Joseph Trevithick contributed research to this article.