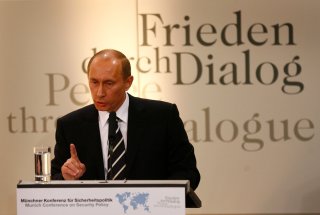 NATO governments and Western news media are extremely agitated by Russian president Vladimir Putin’s recent demands that NATO provide guarantees on several security issues. Specifically, the Kremlin wants assurances that the alliance will reduce the scope of its military presence in Eastern Europe and will never offer membership to Ukraine. Amazingly, both the substance and tone of Moscow’s position seem to have surprised U.S. and NATO officials.  However, indications that Russian leaders are alarmed and angry at NATO’s growing encroachment on Russia’s security zone have been building for years. Indeed, Boris Yeltsin complained about the first stage of NATO expansion that brought Poland, the Czech Republic, and Hungary into the alliance in 1998. Moscow’s objections have grown louder and more insistent with each subsequent provocation.

An especially pointed warning came when Putin addressed the annual Munich Security Conference on March 10, 2007. He took direct aim at the notion so popular in the United States during the 1990s and early 2000s that the international system was unipolar and that Washington’s power was unchallengeable. “However one might embellish this term, at the end of the day it refers to one type of situation, namely one centre of authority, one centre of force, one centre of decision-making. It is a world in which there is one master, one sovereign.”

Putin emphatically rejected that model. Implicitly referring to the U.S.-led military interventions in the Balkans and Iraq, he stated: “Today we are witnessing an almost uncontained hyper use of force – military force – in international relations, force that is plunging the world into an abyss of permanent conflicts.” “And of course,” Putin continued, “this is extremely dangerous. It results in the fact that no one feels safe. I want to emphasise this – no one feels safe!”

It was when he moved on from such general observations to focus on Russia’s relations with NATO, however, that Putin’s objections and warnings became emphatic. “NATO has put its frontline forces on our borders,” although as yet, we “do not react to these actions at all.” NATO expansion, he stated, “represents a serious provocation that reduces the level of mutual trust. And we have the right to ask: against whom is this expansion intended? And what happened to the assurances our western partners made after the dissolution of the Warsaw Pact?”

Following his prepared speech, Putin faced a barrage of mostly hostile questions and observations. One from a German attendee typified the myopic view that dominates Western foreign policy establishments. Regarding “your opinion of NATO and NATO expansion, a phenomenon that you consider dangerous for Russia. Would you acknowledge that this phenomenon is, in practice, not expansion but rather the self-determination of democratic states who want this? And that NATO finds it difficult to accept states that do not declare this readiness? You could admit that thanks to NATO expansion eastern borders have become more reliable, more secure. The questioner asserted further: “This stabilises neighbours,” implying that a bigger NATO actually would benefit security for all nations in Eastern Europe, including Russia. Such clueless comments epitomized the official position of NATO governments that alliance expansion was not directed against Russia. Therefore, the argument went, Moscow’s complaints were unwarranted, since Russia had no reason to be alarmed about NATO’s presence on its borders.

Putin clearly had a different view. “With respect to democracy and NATO expansion. NATO is not a universal organisation, as opposed to the UN. It is first and foremost a military and political alliance, military and political!” Moreover, his concerns and objections went beyond the mere expansion of NATO’s membership. His larger suspicions fairly oozed when he asked “why is it necessary to put military infrastructure on our borders during this expansion?”

The 2007 Munich Security Conference speech should have erased all doubt about whether Russia viewed NATO policy generally and the alliance’s inexorable march eastward in particular as provocative and threatening. Putin was warning his Western counterparts to change course. In retrospect, it may have been the last opportunity to avoid a new cold war between the West and Russia. In their usual oblivious fashion, though, U.S. and NATO officials expressed concerns about the supposedly combative tone of the speech that they believed did not contribute to cordial East-West relations.

Privately, though, a few more perceptive officials acknowledged that relations with Russia had not been handled well. In his memoir, Duty, Robert M. Gates, who served as secretary of defense in the administrations of both George W. Bush and Barack Obama, made some interesting admissions. “When I reported to the president my take on the Munich conference, I shared my belief that from 1993 onward, the West, and particularly the United States, had badly underestimated the magnitude of the Russian humiliation in losing the Cold War...” Yet even that blunt assessment given to Bush did not fully capture Gates’ views on the issue. “What I didn’t tell the president was that I believed the relationship with Russia had been badly mismanaged after [George H.W.] Bush left office in 1993.” Among other missteps, “U.S. agreements with the Romanian and Bulgarian governments to rotate troops through bases in those countries was a needless provocation.” In an implicit rebuke to the younger Bush, Gates asserted that “trying to bring Georgia and Ukraine into NATO was truly overreaching.” That move, he contended, was a case of “recklessly ignoring what the Russians considered their own vital national interests.”

Unfortunately, Gates was an outlier with his realism. Not only did Washington dismiss Putin’s complaints and warnings at Munich, the Bush administration escalated its provocative policies. The following year, Bush intensified his lobbying campaign to bring Ukraine and Georgia into NATO and asked leaders at the annual summit meeting to approve the first step—a Membership Action Plan for both countries. Fortunately, the German and French governments concluded that such a step was too risky, forcing the adoption of a compromise communique. However, even that compromise document declared that Ukraine and Georgia would eventually become NATO members.

Putin’s Munich speech was an important diplomatic warning to the United States and its allies that Russia’s patience with NATO’s encroachment was at an end. But in the years following, Western (especially U.S.) leaders continued to blow through multiple red lights. The shockingly arrogant meddling in Ukraine’s internal political affairs in 2013 and 2014 to help demonstrators overthrow Ukraine’s elected, pro-Russia president was the single most brazen provocation, and it caused tensions to spike. Matters have gotten steadily worse since then, with Washington pouring arms into Ukraine and treating that country as a military client.

Putin’s Munich speech was the first explicit warning of serious trouble if the West did not abandon its increasingly aggressive posture toward Russia; the Kremlin’s latest demands for security guarantees and a NATO military pullback from Russia’s borders may be the last warning. The United States and its allies are backing Russia into a corner, and that is profoundly unwise if the goal is to avoid war with a heavily armed great power.

Ted Galen Carpenter, a senior fellow in defense and foreign policy studies and a contributing editor at the National Interest, is the author of twelve books and more than 950 articles on international affairs. His latest book is NATO: The Dangerous Dinosaur (2019).