Did the Houthis Have Iran's Blessing before Launching a Missile at Riyadh? 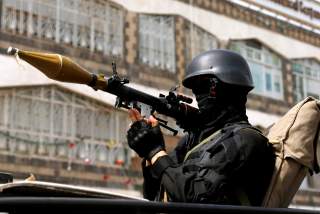 Much of the debate over the missile Yemen’s Tehran-backed Houthis launched toward Riyadh last weekend focuses on possible military retaliation from Saudi Arabia. But an obvious question is being overlooked: Why would Iran, the Houthis primary political and military supporter, risk a direct confrontation with its arch foe for minimal strategic gain in a country of marginal interest?

The Saudi government and the Pentagon believe Iran was directly behind the missile launch, even though some Iranian government officials deny any involvement. A top U.S. Air Force official in the Middle East, Lt. Gen, Jeffrey L. Harrigan, who oversees the Air Force Central Command in Qatar, made statements at a news conferences in Dubai that an investigation was underway to determine how the missile was smuggled into Yemen. Saudi foreign minister Adel al-Jubeir went as far as to describe the missile launch as “an act of war.”

Tehran has extended military and political aid to the Houthis since 2015, when the Houthis overthrew the government of President Abdu Rabbu Mansour Hadi. On the surface, such support seems senseless. Unlike its other patrons in the Middle East, particularly Hezbollah and Syrian president Bashar al-Assad, Yemen offers the Iranians little by comparison. So why would Iran’s government and military apparatus take such a gamble?

Although Iran’s regional foreign-policy objective since the 1979 Islamic Revolution has been to expand its influence in the Arab world, Yemen historically was not part of this military agenda, even though soft power was used. Tehran helped the Houthis overthrow the government of President Hadi in 2015 because the opportunity arose.

More importantly, there are other factors causing Iran to become more entrenched in Yemen:

Iran’s success in keeping Assad in power and its deep influence in Iraq, largely due to the Islamic Revolutionary Guards Corp (IRGC) and its leading commanders, has empowered hardline-dominated agencies and personalities within the government. Now, their voice on regional policy issues by far outweighs that of the less confrontational president and foreign ministry.

For example, three years ago, an official close to Supreme Leader Ali Khamenei, remarked, “Three Arab capitals (Beirut, Damascus and Baghdad) have already fallen into Iran’s hands and belong to the Iranian Islamic Revolution.” The Yemeni capital, Sana’a, would be the fourth, he added.

Even if the Iranian Foreign Ministry or president disagrees privately, their views must conform with those within the system who favor an expansionist agenda. For example, in the aftermath of the missile launch on Riyadh, President Hassan Rouhani, generally averse to conflict, said the attempted attack on Riyadh was justified because of Saudi attacks inside Yemen. “What reaction can the nation of Yemen show toward this amount of bombardment,” Rouhani asked.

“They say that they should not use weapons? Well, you stop the bombs, and then see if you don’t get a positive reaction from the nation of Yemen,” he said.

Ali Akbar Velayati, a long-time close adviser to Supreme Leader Ayatollah Ali Khamenei, characterized the Houthis as a blessed movement that will liberate their land from outside aggressors, just as Hezbollah has done in Lebanon.

The hardline newspaper, Kayhan, considered to reflect Khamenei’s views, predicted that the Houthis’ next target will be in the United Arab Emirates. The Kayhan headline read: “Ansar-Allah’s missile fires at Riyadh, the next target, Dubai.”

Second, although religion—Iran is predominantly a Shi’a country—does not dictate Iran’s regional strategy, Tehran no longer tries to hide its pro-Shi’a agenda in the wake of the Arab uprisings. Iran’s military involvement in keeping Assad in power and its support for Hezbollah in Lebanon have made Tehran’s once pan-Islamic agenda obsolete, at least as a matter of strategy.

In addition, Iranian officials believe it is necessary to push back against Sunni extremist groups that claim the Shi’a are not real Muslims. Iranian and IRGC officials refer to these groups as “takfiris,” a term used to describe the ideology of jihadist groups, such as the Islamic State and other armed Sunni organizations.

However, there are exceptions to this rule if Iran believes supporting a particular Sunni group, such as the Kurds in northern Iraq or Al Qaeda operatives, is a simple matter of realpolitik. This might be the thinking behind supporting Yemen’s Houthis, though the strategic gain for Iran is minimal and the risks are now potentially devastating.

Geneive Abdo is a resident scholar at the Arabia Foundation and the author of four books, including The New Sectarianism: The Arab Uprisings and the Rebirth of the Shi’a–Sunni Divide.