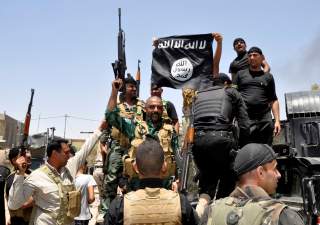 By declaring victory over the Islamic State President Trump meant to fulfill his most vociferous electoral pledges: to destroy “Islamic” terrorism “just as we have defeated every threat we faced at every age.”

Trump’s decision to pull U.S. troops from Syria was justified by victory over the Islamic State and by his desire to end the U.S. role of global policeman. This decision to leave was a pragmatic pre-electoral step and reflected the general U.S. trend of abandoning its paternalistic policy, and in this case, implies a reluctance to spend money on postwar reconstruction in Syria.

But was the Islamic State really defeated? For the first time in the last hundred years, the West faced a sudden intensive mobilization of thousands of fighters from the entire world under black banners of the Islamic State, which seized a large swath of land for an extended period of time. Essentially, what happened in Syria and Iraq was a global presentation of a transnational extremist project called the Islamic State, which declared war against the United States and a coalition of sixty nations. The Islamic State is not attached to a specific territory and might be reborn in any Muslim region of the world. In other words, the Islamic State poses a bigger danger as a global terrorist network.

The strength of the Islamic State is in its ideology appealing to an unlimited source of potential fighters. In Syria the multi-headed hydra of jihadism has lost only one battle, but not the entire war. In other words, without being defeated the jihadist project of the Islamic State ideologically remains invincible.

Hence, Trump’s hasty declaration about victory over the Islamic State might become a major foreign-policy mistake.

The truth is that the war declared to the United States on 9/11 can be ended only after jihadi ideology is defeated. No Mexican wall can shield the United States from this war. However, so far President Trump has done nothing to launch the fight on the main battlefield of ideological struggle against jihadi terrorism. Jihadi fanatics aspire to gain nuclear weapons despite efficient anti-proliferation mechanisms in place, and the implications of this endeavor might be tragic.

The very fact of the emergence of the Islamic State in an environment of incessant bloody extremist attacks requires a clear definition of the problem and a roadmap for the ideological disarmament of terrorism. Henry Kissinger reminds us that historically Muslims divided the world into the “realm of peace” (dar-al-Islam) ruled by Caliph and the “realm of war” (dar-al-harb), the lands beyond borders of the Caliphate, where unbelievers dwell. “The dar al-Islam, in theory, was in a state of war with the dar al-harb, because the ultimate objective of Islam was the whole world. If the dar al-harb were reduced by Islam, the public order of Pax Islamica would supersede all others, and non-Muslim communities would either become part of the Islamic community or submit to its sovereignty as tolerated religious communities or as autonomous entities possessing treaty relations with it. The strategy to bring about this universal system would be named jihad, an obligation binding on believers to expand their faith through struggle. “Jihad” encompassed warfare, but it was not limited to a military strategy.”

This begs a very important question: is the establishment of the Islamic model of governing all over the world and creation of a single state, the Caliphate, the final goal of Islam and duty for believers? Hence, is regaining the territories once conquered (and lost) by Muslims the real purpose of Jihad?

Is the Islamic world capable of facing the historic challenge of jihadi terrorism?

Is Islam a religion of peace, of peaceful coexistence of peoples and states, or is it an ideology of terrorist war against adherents of different faiths in the whole world? In other words does Islam divide the current world into the “realm of peace” (the world of Islam) and the “realm of war” (i.e., the goal of Jihad prescribed to Muslims?) These tough questions were raised after the world learned about the Islamic State and other terrorist groups’ bloody crimes.

The fateful challenge to Muslim theologians, politicians, and intellectuals is to reform the political and geopolitical tenets of Islam, which have lost their relevance. The answer to this challenge can be presented only in a document approved by the Universal Islamic convention of acknowledged representatives of all Muslim religious schools. Essentially they are supposed to provide a detailed answer: is the West and Russia the “realm of war” (the land of prescribed and legitimate Jihad)? They would also be required to provide clear definitions for a modern understanding of three interrelated Islamic terms: “Caliphate,” “Jihad,” and “Shaheed.”

The fact that such a document of religious and political nature is allowed by the Quran and Sunnah plays a crucial role. The two holy books provide theologians with the right to interpret ambiguously-understood provisions of the sacred books, including using purely rational methods to solve new or unresolved issues. By default, an unanimously-approved verdict becomes an unqualified legal norm. The problem is that due to political, ideological, religious, historical, and territorial reasons no single Muslim nations can initiate such a convention. The most crucial obstacle is the key question of modernity: is regaining the lands once conquered and lost by Islam (Spain, Sicily, Malta, Balkans, etc., and Palestine) the real goal of Jihad? Do the Jews, who were once expelled from Arabian Peninsula, have the right for their own state? Otherwise, without recognizing the right of Israel to exist, the full-scale cessation of the undeclared religious war against the West is not possible.

Such a historical turn would open a real opportunity for a Middle Eastern peaceful settlement by resolving Arab-Israeli contradictions via international legal tools. Such a radical change of circumstances would lead to a transformation of Hezbollah and Hamas, the creation of a full-fledged Palestinian state, and the return home of long-suffering Palestinian refugees.

Another equally important task for a global theological Muslim convention is to provide the list of reasons why possession of nuclear weapons and WMD directly contradicts to the tenets of Islam. This verdict would help the Iranian leadership to end its nuclear program without losing face. It would also be a great contribution to the normalization of relations between the Islamic world and the West.

Indispensable Role of the United States

This direct and sincere appeal to the Muslim theological community and political elites should come from outside of the Islamic world: from America and Russia (as a legal heir of the Soviet Union). Here are two crucial elements to consider:

First, it was the U.S.-Soviet confrontation which created the prerequisites for the legitimization of Jihadi terrorist ideology and emergence of a sustainable international terrorist network, the goal of which is to create the Great Caliphate. Second, the key targets for Jihadi attacks are the United States and Russia for being, among other things, nuclear superpowers.

In other words, the United States and Russia bear a special historical responsibility in the fight against Jihadi terrorism. This is exactly the case when an initiative of the leadership of the “Great West,” namely the United States and Russian presidents supported by the European Union chairperson and the British prime minister could make a difference in building the new world order. And the first step should be made by the leader of the only existing superpower, particularly given the fact in his electoral campaign Trump promised to “halt the spread of Radical Islam” and to “disrupt and disable their propaganda and recruiting.”

However, the final document of the Universal Islamic conference could succeed as an ideological weapon in information warfare against Jihadi pseudo-Islamic terrorism only if it would be a joint effort of the “Great West” and the Organization of Islamic Cooperation (OIC). This document could create an unprecedented informational-propagandistic outreach, a long-term program of actions of the Great West and OIC, which would include the integration of the final document into curriculum of high schools and universities, development of regular prayer programs in mosques, religious workshops, radio and TV shows, and counterterrorism propaganda in social networks, among other things.

Islamic conference documents should be used as a foundation for cooperation between special services and law-enforcement agencies of the “Great West” and the OIC in order to improve counterterrorism legislation and the procedures of a politically-unbiased definition of terrorist groups and media resources. The decision of Muslim theologians, which would be granted a status of a legal norm in Sharia law, could become the legal basis for International Islamic Tribunal on terrorism. Given the political sensitivity of the issue, at the early stage, this Tribunal would limit its scope with the Islamic State and Al Qaeda. Its sentences could create an extremely important precedent and could be used as a judicial definition for Hezbollah and Hamas.

Therefore, the historical document approved by the Universal Islamic conference in the holy city of Mecca and endorsed by the leaders of OIC would signify victory over Jihadi terrorism ideology and the end of the undeclared religious war. Essentially, it would be a declaration of the new “Peace of Westphalia.”

Abdul-Khakim Sultygov served as the Russian Special Representative for Human Rights in Chechnya from 2003 to 2004.