Diplomacy Is the Best Way Forward with Iran 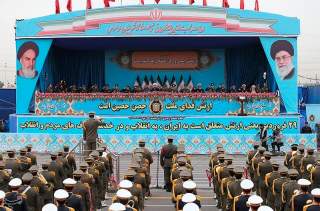 Editor’s Note: This statement was released today by the National Coalition to Prevent an Iranian Nuclear Weapon. It has been republished here in full with their permission.

The agreement to prevent an Iranian nuclear weapon (the Joint Comprehensive Plan of Action or JCPOA) is an essential building block for restoring vital U.S. national-security interests and commitments to allies. An American president should put in place this building block expeditiously. The U.S. unilateral withdrawal from the JCPOA on May 8, 2018, significantly undermines America’s national security and is fueling momentum for a possible new conflict in the Middle East. If Iran also withdraws from the JCPOA, or from the Nuclear Nonproliferation Treaty (NPT), the Trans-Atlantic alliance will be dealt a severe blow and a Middle Eastern nuclear arms race could ensue.

The U.S. withdrawal from the JCPOA undermines America’s leadership and stature around the world. It raises the question whether the United States can be counted on to comply with international agreements. It signifies abandonment of U.S. participation in a groundbreaking international step toward the nonproliferation of nuclear weapons. Aggressive use of sanctions raises the specter of longer term damage to the power of the U.S. dollar and U.S. Treasury Department.

Rejection of the JCPOA and heavy new sanctions on Iran, further weakens U.S. relations with its allies, which have remained committed to the agreement to assure that Iran will not get a nuclear weapon.

Will the JCPOA Survive Another Year?

Iran’s leaders are seeking ways, short of withdrawing from the JCPOA, to respond to U.S. sanctions against European and world trade and investment with Iran. Iran’s alternatives, however, are limited. Despite strong European government support for the JCPOA, private corporations have chosen not to confront the U.S. on sanctions, thereby depriving Iran of the economic benefits that had been crucial to the agreement to severely limit its nuclear program. Iran has been trying to outlast the current U.S. administration, despite the mounting threats of violence and ever tighter economic restrictions, particularly on Iran’s exports of oil.

The U.S. administration, supported by Israel, Saudi Arabia, and a few Gulf states, have set a goal of destabilizing Iran’s government, which in turn may have the effect of driving Iran into even more radical and hostile acts before the U.S. 2020 elections. Increasingly, the administration’s public comments point in this direction. U.S. “maximum pressure” and threats against Iran make clear the objective of the administration’s policy is to bring down the regime in Tehran by provoking national unrest and destabilizing internal disorder in the country. Heightened U.S. actions against Iran could lead to the collapse of the JCPOA and provide the administration with a ready excuse for military conflict with Iran.

Iran’s withdrawal from the JCPOA would be a perilous game changer for U.S. national security. In addition to setting the stage for war, it could spark a proliferation of nuclear weapons and, according to many Europeans, deal a severe blow to the Trans-Atlantic Alliance and would also further erode U.S. relations with Russia and China. Iran’s leaders are aware they have the power to further isolate the United States but so far have not considered it in their own security interests to use it.

U.S. Re-entry to the JCPOA Will Require Diplomacy and Resolve

For the United States to re-enter the JCPOA all the original parties—(except the United States) China, France, Iran, Germany, Russia, and the United Kingdom—will have to agree on the means to accomplish it. There is no provision in the agreement for an exit from the JCPOA by any party nor any provision for re-entry.

Re-entry will provide the opportunity to rebuild the strong alliance of states that pressured Iran to the negotiating table over its nuclear program. Outside of the JCPOA, the United States is now deprived of allies to pursue diplomatic and coercive measures to confront Iran’s growing ballistic missiles program, its support for Hezbollah and Houthi proxy forces, its threats against Israel, and its troubling interference in Syria and elsewhere in the region.

Mending the distrust and repairing the damage caused by the U.S. withdrawal from the JCPOA is a daunting task. Reaching agreement on U.S. reinstatement as a full member of the JCPOA is the essential first step. It would send a powerful signal to the world that the United States is ready once again to become a trusted partner and a nation that seeks the peaceful resolution of disputes and conflicts. All Americans, whatever their politics, should give serious thought to these issues. How we handle them will have a critical impact on our nation’s future.

Ambassador Morton Abramowitz is the former assistant secretary of state for intelligence and research. He previously served as U.S. ambassador to Thailand and Turkey.

Vice Adm. Donald Arthur (retired) was the thirty-fifth surgeon general of the Navy.

Barbara K. Bodine is the former ambassador to Yemen.

Gen. Chuck Boyd (retired) formerly served in the U.S. Air Force and is the former deputy commander in chief of U.S. European Command.

John Brennan is the former director of the Central Intelligence Agency.

Joseph Cirincione is president of the Ploughshares Fund.

Ambassador (retired) James F. Collins is ambassador at large for the New Independent States and to the Russian Federation.

Thomas Countryman is a former assistant secretary of state for International Security and Nonproliferation.

Ambassador (ret.) Chester A Crocker is a former assistant secretary of state for African Affairs.

Suzanne DiMaggio is a senior fellow at the Carnegie Endowment for International Peace.

Lt. Gen. Robert Gard (retired) formerly served in the U.S. Army and was president of the National Defense University.

Leslie Gelb is a former assistant secretary of state for Political-Military Affairs and the director of Policy Planning and Arms Control at the Department of Defense.

Ambassador James Goodby is a former U.S. ambassador to Finland and a deputy chief of the U.S. delegation to the START talks.

Lee H. Hamilton is the former chairman of the House Committee on Foreign Affairs and a Vice Chair of the National Commission on Terrorist Attacks Upon the United States.

Ambassador (William C. Harrop is a former U.S. ambassador to Israel and inspector general of the Department of State.

Gary Hart is a former member of the U.S. Senate and Special Envoy to Northern Ireland.

Stephen B. Heintz is President of the Rockefeller Brothers Fund.

Carla A. Hills is a former ambassador and U.S. Trade Representative.

James Hoge is a former editor of Foreign Affairs Magazine.

Daryl G. Kimball is the executive director of the Arms Control Association.

Daniel Kurtzer is a former U.S. ambassador to Israel and Egypt.

Ellen Laipson is a former vice chair of the National Intelligence Council and president emeritus of the Stimson Center.

Carl Levin is a former U.S. Senator and chairman of the Senate Committee on Armed Services.

John Limbert is a former ambassador and deputy assistant secretary of state for Iran.

Ambassador (ret.) Winston Lord is a former assistant secretary of state for East Asia and the Pacific; a U.S. ambassador to China, and a director of Policy Planning at the Department of State.